How would Beverly Tatum interpret the students from Skin Deep? What stage (or stages) would she place them in?

Tammy from the film Skin Deep is a white female who has a strong position against racism. Based on Beverly Tatum’s book “Why are all the black kids sitting together in the cafeteria?”, Tammy would be placed in between the inmersion/emersion stage and the autonomy stage in Helms’s model because she embraces and understands her White identity and use those feelings to work against racism, while she leaves behind her feeling of guilt and embarrassment (Tatum 94-95) 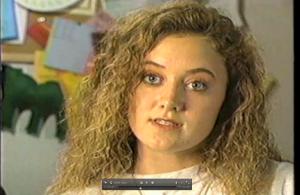 In the video she also says to the other members of the group: “I’m afraid of being judged just because of the color of my skin, she’s white, she’s probably racist” (Reid et al, 03:22) and “I’m an individual” (Reid et al, 27:44). These statements prove how she is still struggling with embracing her white identity and the privileges that it implies and thus is in the inmersion/emersion stage.

Tammy also says: “I wanted to have more contact with the African American students on campus and understand the issues they are facing and so I joined black awareness committee, one for the social thing because right now my group of friends isn’t very diverse and I felt like maybe I would take the first step and maybe they’ll take a step and join some of our organizations” (Reid et al, 20:24). This quote from Tammy shows how she is taking a step towards helping stop racism in her every day life, and this would be consider an action taken by someone in the autonomy stage. Although she acknowledges the benefits that she has based on the color of her skin, she has left behind racism and is working towards eliminating “institutional and cultural racism” (Tatum 94-95).