Update: The NAACP Board has approved the moratorium on new charter schools. Read the Tweet below and a statement from the NAACP here. 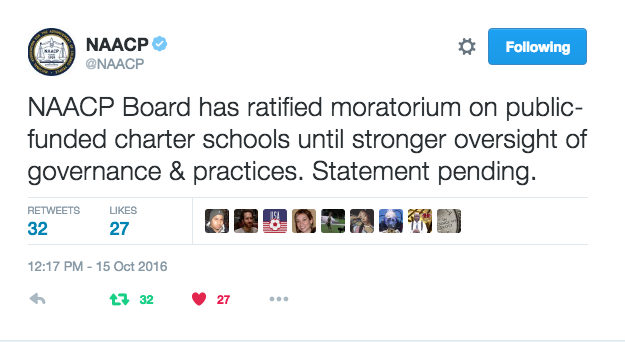 Last July, the NAACP (national conference) proposed a resolution that called for a moratorium on new charter schools. This weekend, the NAACP will vote to support (or not) this resolution.

So why exactly did the NAACP propose a resolution to prohibit making new charter schools? And how will the CT delegation to the NAACP vote?

The news initially broke on the Cloaking Inequity blog written by Professor Julian Vazquez-Heilig who also offered some detail about the resolution. The reasons in support of a moratorium included:

Here are some screen shots of the NAACP proposed resolution courtesy of Vazquez-Heilig on his blog. Take a look and read for yourself. 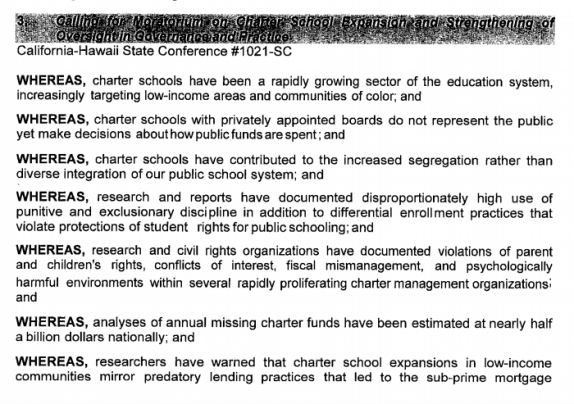 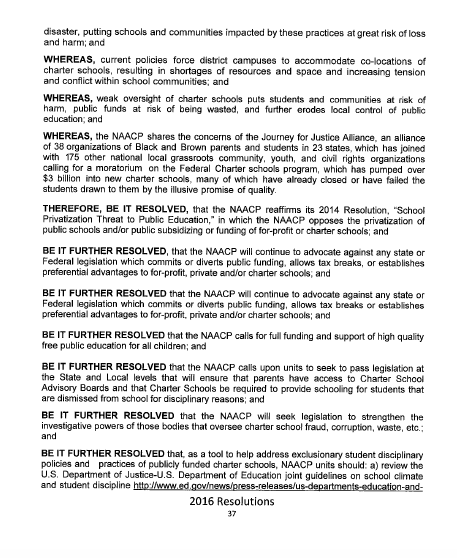 The NAACP proposal produced a flurry of essays, think-pieces, and op-eds. Supporters of charter schools saw this NAACP resolution as some new threat to the charter school and privatization project. There are Black and Latino groups that believe school choice is a civil right. These groups are often supported by interests that want increased school choice and privatization.

To be sure, there are a variety of opinions on the matter. It’s also important to remember that the NAACP resolution is calling for accountability of existing charter school and a stop to making new charter schools. This wasn’t a move to close or eliminate charter schools.

However, the NAACP and other civil rights groups have increasingly raised concerns about charter schools over the last decade. So this isn’t entirely a new thing. Rather the NAACP resolution is a more clear statement of the NAACP historic position as a leading civil rights organization and how privately managed charter schools might be at odds with that position.

You can read some of the best stories of the NAACP resolutions below.

For Connecticut, the NAACP vote on the charter school moratorium resolution will be something to watch. Similar to the concerns of the NAACP, Connecticut charter schools are overwhelmingly segregated by race, there are concerns about the ways charter schools divert public funds to private interests and malfeasance, enrollment discrimination, and excessive discipline. Given this information, how will Connecticut’s NAACP representative vote on this resolution?

The NAACP-CT President Scott X Esdaile will be a voting member on the resolution. (Here is the full list of NAACP board members that will vote on this resolution.) Recently, the NAACP-CT has been very cozy with the private charter school industry.  For example, Mr. Esdaile spoke at a charter school industry rally (couched as a rally to fix “failing” schools) in 2014.

As this NAACP debate about charter schools happens, new grassroots civil rights have more decisively confronted charter schools. Groups like The Movement for Black Lives have called for an end to school privatization (e.g. charter schools) in favor of local control of schools. Similarly, Journey 4 Justice has supported a moratorium on charter schools, particularly since they have tools to replace existing schools and disenfranchise Black and Latino parents and students in cities like Chicago and elsewhere.

Will the NAACP (and the CT representative) join these grassroots organizations and stand up for civil rights of children of color and public education by supporting a moratorium on privately-managed charter schools?