When CT Voices co-authors Kenneth Feder and Sarah Iverson visited Trinity College to discuss their draft report, they asked for advice on how to communicate their findings with the public. Trinity College student Veronica Armendariz ’16, an Educational Studies major and student researcher in the Data Visualization project, recommended placing school inequality and town racial data in a searchable map, so that viewers can see statewide patterns and also zoom into specific neighborhoods. Veronica worked with CT Voices and taught them how to create their own searchable maps with Google Fusion Tables, using an open-source template developed by Derek Eder in Chicago. Click on both of the maps to explore the data.

In summer 2014 we collaborated with Achieve Hartford to design a school search tool that shows city parents their eligible public school choices. Our goal is to replace the existing SmartChoices site, which Trinity created in 2008, with a simpler tool that’s easier for a small non-profit organization to maintain on their own. To accomplish this task, we turned to Google Fusion Tables and the Searchable Map Template created by Derek Eder at DataMade in Chicago. Derek worked with us to expand his open-source code (available on GitHub) to display a sortable table of results in addition to the interactive map. It’s a responsive design, meaning that it adjusts the display to fit the size of your device, such as tablets and smartphones. Learn more about the background of this project and explore the beta version of SmarterHartford.org (which will be publicly launched soon).

Diana Deng from the Partnership for Strong Communities created this interactive map of housing affordability and mass transit, based on guidance provided by Veronica Armendariz and the DataViz team at Trinity College. This map draws data from an easy-to-maintain Google Fusion Table, and the interactive map platform runs on an open-access code template created by Derek Eder at DataMade in Chicago. Learn more about the map and explore it on the Partership’s site at: http://pschousing.org/news/new-partnership-map-allows-users-explore-connections-among-housing-transit-and-population 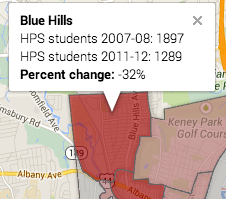 Great By 8 is a community collaborative focused on improving access to high quality services in the areas of early childhood education and health in the West Hartford area.

For GreatBy8, we created an interactive map that is able to allow users to look up their addresses in West Hartford and find different resources (such as schools, early childhood programs, health programs, and other programs) as well as seeing the demographics in each of their individual census tracts. Within each of the census tracts users are able to see the number of children 0-9, median household incomes, and percentage of adults with a bachelor’s degree and above. To see the different schools, early childhood centers, and resources around you as well as other demographics according to your own census area, type in your address here.