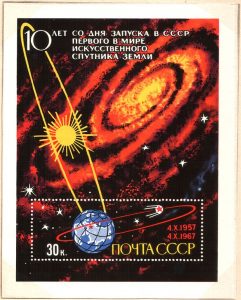 The world first heard about the launch from a brief report in a side column on the front page of Pravda. Under the bland headline “Tass Report” there was a dry description of the long standing speculation in the scientific community about the possibility of creating “an artificial Earth satellite.” Only in paragraph three did they come to the point, stating that the Soviet Union has brought this dream to fruition. The article went on to give a few facts and figures about the new satellite. No name for the satellite was mentioned.

Despite the fact that Pravda buried the lede, the announcement created an international sensation. Foreign papers announced the event the same day in blaring front page headlines. The next day, as Soviet leaders realized what a propaganda coupe this was, Pravda dedicated the entire front page to coverage under the full-width headline “The World First Artificial Satellite of Earth Was Made in the Soviet Union!”. Articles above the fold included “A Triumph of Soviet Science and Technology” and “The Most Impudent Dreams of Mankind Become Reality”.

In 1957 the word “satellite” needed to be qualified with the adjective “artificial.” Up to then this word referred primarily to natural satellites such the Earth’s moon. Thus the Pravda’s clunky phrase “artificial satellite of Earth”.

Because they were dealing with a new concept the Western press struggled with what to call this “artificial satellite”. In the first few days it was call “an artificial satellite of Earth” as Pravda had, but it was also called “the device” and even “the Red moon”. In Washington, journalist [?] was asked for suggestions for a less awkward description. He took the phrase искусcтвеyный спутник Земли (artificial satellite of Earth) from Pravda, kept only the key word, and left it untranslated: sputnik. The suggestion was soon widely adopted and Sputnik became the Western name of the Soviet satellite.

However, awareness continued for some time that Sputnik was not a formal name. For example, after the Soviet Union launched a second artificial satellite, an article in Scientific American discussed tracking them and included a graph with lines labeled Sputnik I and Sputnik II, but in the body of the article they were referred to as The First Satellite and The Second Satellite.

“Sputnik” never attained the status of a proper name in Russian and probably never will since the idea of a sputnik called Sputnik would be silly. The Russian-language press continues to refer to Sputnik I simply as “the first artificial sputnik of Earth” (note the lower case) and to report on the launch of American sputniki.

But whence the idea that “Sputnik” is an imaginative name chosen because it means “fellow traveler”? This is a misunderstanding. While sputnik does mean “fellow traveler”, it was already the standard Russian word for astronomical objects which orbit a parent body. The Moon is Earth’s sputnik. The idea that the term was invented for the Soviet space program may be traceable to an article in the New York Times of October 6, 1957 entitled Soviet ‘Sputnik’ Means A Traveler’s Traveler.

The English word “satellite” has a similar origin. It once meant an attendant of a person of importance. Imagine the confusion which could have occurred if the US had launched the first artificial satellite and neglected to name it. It is only a slight stretch to imagine the Soviet press writing, “the Americans named their sputnik Satellite which means ‘an entourage member’.”