Debating over the children’s appearance during permanency hearing 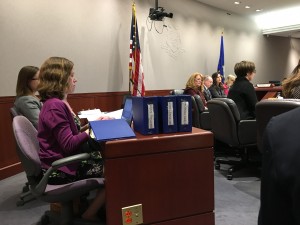 On 23rd February, the Children Committee Hartford discussed about whether the committee should pass S.B. No 180. Bill 180 states that “To enable children twelve years of age and older who are under the custody of the Department of Children and Families to have a more prominent voice during permanency hearings, to require youth advisory councils at certain child care facilities, to require the department to provide foster care family profiles to foster children and to solicit feedback from certain foster children to better recruit, train and retain high-quality foster parents.”1

During the public hearing, on one side state representative Noreen Kokoruda, Sarah Eagan, state committee advocate, Bianca Rey and Zoe Stout all believed that Bill 180 was a very necessary and important bill which could be a life changing, potentially. On the other side, the commissioner of Department of Children and Family, Joette Katz and few Representatives raised some different voices.

Sarah Eagan, state committee advocate, wanted to ensure that the children had the opportunities to meaningfully participate in the meeting or hearing if that’s what they want to do.

According to Bianca Rey, junior policy fellow of Connecticut Voices of Children, “S.B. 180 made Connecticut a leader in this nationally. Youth should be engaged as early as possible in determining their own future while transportation to the hearing could be a challenge for a child who is about 12 years old. So we really do encourage you to support this bill because it really is the key to meaningful and full-youth engagement than just youth-name engagement only.”

On the other side, Joette argued that she didn’t oppose to this bill while it shouldn’t be mandating. Sometime children’s lawyers may feel differently from their participation and may go through a waiver process which could be complicated. Also Barbara Claire, legal director of Department of Children and Families, stated that usually these parents are at the hearing and they might discuss about the abuse or neglect that the child had gone through. The children should choose whether they want to go to the hearing, rather than mandating. In her testimony, she also stated that it caused a significant fiscal impact of transportation while Noreen opposed that “I know it’s a significant fiscal impact. But sometimes dollar spent are the right dollars.”

Another debate between Zoe Stout and Representative Kelly Luxenburg was about how the youth were notified to the court proceeding and how willing they were to go to the courts by themselves. Zoe answered that youth should be notified fourteen days ahead the permanency hearing. However, the problem was the notice from the court usually were sent to DCF office, rather than actually going to the youth themselves. She also claimed that at least most of her clients wanted to go to the court, not only to say what they want to say, but also what people say about them. Kelly also questioned what if there was sensitive information in the court room that the youth shouldn’t hear. Zoe explained that firstly, the youth can be excused at any time from the court. What’s more, she believed that “people sometimes were over-sensitivity. Youth have lived it. They know better than any of us in the room what they have experienced at home.”

During the hearing, there were two girls who showed their supports to Bill 180 since both of them have been through the hearing process. Lishkaly Padilla who is 17 years old never got involved into any hearing and felt her voices were not heard by DCF. She had gone to a foster family where she was treated badly. So she suggested that written foster family profiles should be given to children before they moved to a new home which could make them feel more comfortable. Ronaelle Williams, a 20-year-old girl, had been presented at one hearing which she had a chance to talk to the judge herself. She believed that children should have a say and their voices mattered.