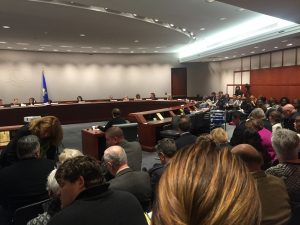 HARTFORD CT MARCH 1st 2017– It was a gloomy Wednesday morning as everyone proceeded into room 1E of the Legislative Office Building. It was completely packed with men and women public officials dressed in suits. The hearing began fifteen minutes late due to the over capacity of people and they took this time to notify every one of the other exits in case there was an emergency. A member of the board stood tall to signify that the members were ready to begin and for everyone to quiet down and take their seats. She explained that the first hour will be set aside for public officials to speak and that the second hour they would open it up to the public. Due to the capacity of the individuals in the room, the board decided to set a three-minute timer for each individual representing their testimony. This way it allowed an equal opportunity for everyone to have their voice be heard without having to wait hours.

The first proposed act was S.B.No. 2 which is an act concerning the development of a more equitable education cost-sharing grand formula (ed). Representative Chris Soto with the Connecticut coast guard shared his testimony on how he wanted to use funds to make Connecticut an all magnet district. The committee only had one brief question which was quickly answered and then the second name on the list was called up. They were not present so they called the next person in line; Mike Bocchino from Greenwich, CT along with the Greenwich Superintendent.

They came in support of the H.B. No 7158 which is an act concerning authorization of state grant commitments for school building projects (ed). Mike Bocchino spoke first and gave history to the matter at hand. He explained how the State of education notified Greenwich public schooling that they had an issue with racial diversity throughout their public schools. Bocchino then went on to describe how they then submitted and have had many people sign their plan to create a magnet school in New Lebanon. They need this particular bill to keep passing through so that they can begin to help work with this magnet school they created. He stated that the teachers were working out of closets, students do not have enough space to eat in the cafeteria and or play in the small gymnasium. The kindergarten spends half of their education day at a different facility and then buses them back to the main campus to finish their classes due to the lack of rooms provided at this magnet school.  It is not a proper place where we can educate our children.

The board then asked, “If members of the community do not support this bill, why don’t you redistrict?”

Peter Sherr board of member chairman of Greenwich schools spoke to this issue. He explained how the board has come together as a community and considered six different options for fifteen to eighteen months. They have spent extensive amounts of money on this issue and on an advisor to look into redistricting. They did not decide to redistrict because of two major reasons. First, it would not be beneficial to our issue at hand because in a few years we would still be in compliance. Second this community has a high minority population specifically Hispanic. This specific Hispanic community has spoken out and make it very clear that they do not want to redistrict. One major reason they voiced is how it would cause a divide in their community and force their children to be separated traveling to school.

A follow up question was then asked by Representative Belsito, “Could you tell us the cost of the new school?”

After this no more questions were asked and the committee dismissed them and called the next official. The mayor of Waterbury was next at the microphone, and spoke with a testimony addressing the first proposed bill (S.B. No 2). He described that Waterbury has had a major increase in students in the public school system since 2010. In his testimony he only referenced the amount of money that Waterbury is was given from the state in comparison to similar towns like; Hartford, Bridgeport, and New Haven. It was mentioned that 80% of Waterbury’s public school population is eligible for a supportive lunch and that the town pays needs more per pupil and gets less per pupil from the state compared to other towns. It was made clear that Waterbury is not getting enough money from the state and they have had to raise their mil rate.

A follow up question was presented by a board member, “With this money what are your plans?”

The major explained how they need more support for their special education program and that some of the money would be to help out that program. Another board member spoke up and mentioned how Waterbury has the option to tax their hospital and asked if this would could help the issue.The major mentioned how they were blessed to have two hospitals in Waterbury and how taxing them will help tremendously in the next fiscal year. He also noted that it would be an interesting concept and gives us an opportunity, yet how the hospital is their strong safety net and they must keep that in mind going forward.

At this point in time no one had anymore objections. These bills are now in the hands of the Board of Education and hopefully will get passed. 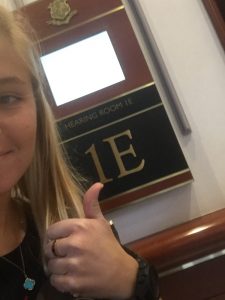