Trinity College on the Occasion of its 197th Charter Day

By bclark in General, Hartford History, Papers, Research, Trinity College on May 16, 2020. 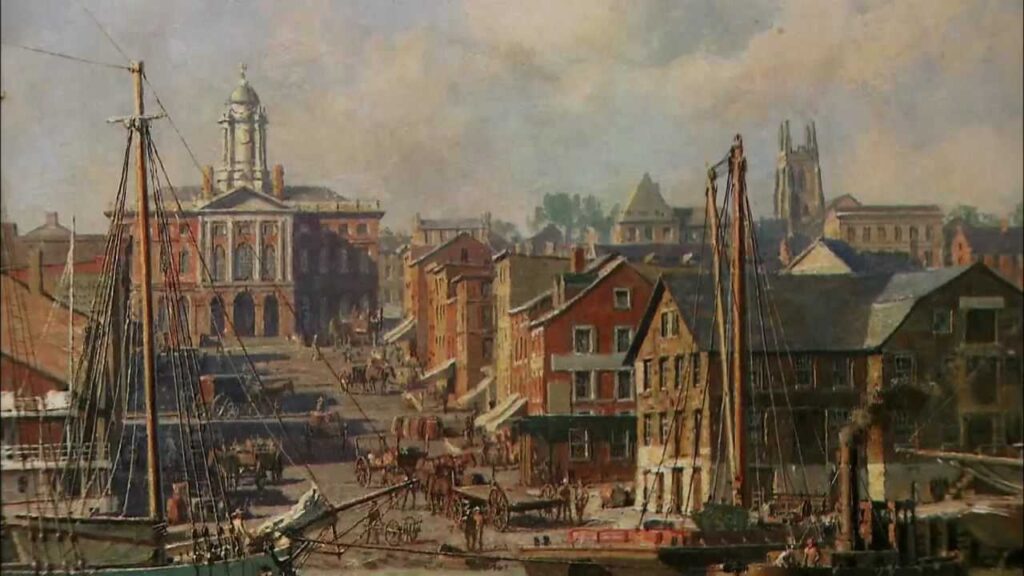 Today, May 16, Trinity College celebrates the 197th anniversary of Charter Day. This occasion marks the date that the Connecticut General Assembly approved Trinity’s charter, giving the school (then called Washington College) the ability to exist as an institution. Professor of History Glenn Weaver, in his 1967 account The History of Trinity College credits Episcopal Bishop Thomas Church Brownell (now proudly watching over Trinity via a statue on the quad) with bringing the first Episcopalian college to Connecticut.

The call for Washington College arose as Connecticut’s old Standing Orders were discarded in 1818 in favor of a new Constitution, which ended the de facto “establishment” of the Congregational Church in the state. According to Weaver, the founding of Connecticut’s Episcopal institution closely mirrored the creation of Geneva College (now Hobart College of Hobart and William Smith Colleges) in 1822.

Episcopalian founders argued before the Connecticut General Assembly that the creation of a second college in Connecticut would greatly benefit the state and its people, not compete with the venerable Yale, Connecticut’s school affiliated with Congregationalism.

Brownell, who was the Third Diocesan Bishop of the Episcopal Church in Connecticut from 1819-1865, later served as the 7th Presiding Bishop of the Episcopal Church from 1852-1865 and as President of Washington College from its founding until his resignation in 1831. Brownell worked alongside prominent Connecticut men including Hartford merchant and diplomat Charles Sigourney, businessman and philanthropist David Watkinson, U.S. Representative and Connecticut State Senator Ebenezer Young, and Episcopal ministers Richard Adams, Thomas Macdonough, and Nathan Smith to establish the college.

The Hartford Courant (originally the Connecticut Courant) reported on the bill to establish a new college in the state as it was presented to the Legislature. Though the report included the “advantages of the establishment of another literary institution, founded on just and liberal principles,” the Courant reported some hesitance to grant the charter. Some members of the Legislature objected, as it may have an “unfavorable and unfriendly influence” on Yale. Despite this, the Courant announced that the Charter was accepted and approved by a “handsome majority.”

The Charter for Washington College was granted by the Connecticut Legislature on May 16, 1823. This makes Trinity’s founding date, 1823, however, the college did not graduate students until 1825, with the first class consisting of one senior, one sophomore, and six freshmen who began in September 1824.

In fact, it was not until March of 1824 that the College’s Trustees voted on a location for the institution, Hartford, which won over Middletown and New Haven. Hartford citizens would later contribute $22,515 in support of the College’s construction on property now adjacent to Bushnell Park.

A key aspect of the College’s charter championed by Brownell was the refusal to force incoming students (or members of the Board of Trustees) to undergo religious examination. At the time, this distinguished Trinity from peer schools that took a less progressive stance on religious tolerance, as pointed out by the late College Archivist Peter Knapp in his text Trinity College in the Twentieth Century. The Charter of Washington College, which espouses the “great advantages accrue[d] to the State, as well as to the general interests of literature and science,” can be read in full via the College’s digital repository here.

In a Tripod commemorative from 1905, then Editor-in-Chief Malcolm Collins Farrow ’05 reflected on the significance of the Charter’s 82nd anniversary at the time of the inauguration of Flavel Sweeten Luther as College President. Specifically, the writer ruminated on the declining role of the Episcopal Church at Trinity and the widespread religious tolerance promoted by the College. A Tripod article from May 1923 reports on a celebratory service in the Trinity Chapel to mark the centennial of the Charter’s approval. Thirty years later, in 1953, President Albert C. Jacobs was officially recognized as College President in a formal ceremony recognizing the 130th anniversary of the Charter.

Since then, there does not seem to be a consistent celebration in recognition of Charter Day on May 16. In the 1990s, then President Dobelle brought first-years to the Old State House in downtown Hartford to sign the matriculation book, as opposed to the Chapel. The Tripod noted some disagreement with this practice, as a writer for a 1996 issue of the paper argued that celebrating matriculation at the Old State House could be seen as “unwelcoming” to a student body increasingly not from Connecticut or New England.

It seems that a return to festive celebrations of this momentous occasion is perhaps long overdue. Especially as we are all separated by the coronavirus and unable to be at our beloved alma matter, an old tradition should be revived when we are together next May: the celebration of Charter Day by the faculty, alumni, and students of Trinity College. After all, so many of us owe our education and work today to this institution and to the zeal of our founders for the liberal arts tradition we so dearly love.

This article first appeared in the Trinity Tripod on Saturday, May 16, 2020.

← Congratulations to Our Class of 2020 History Thesis Writers!