While it is not the single most devastating natural disaster to afflict Japan, the January 17, 1995 Great Hanshin earthquake is certainly one of the most important. Registering as a 7.2 event on the Richter scale, the city of Kobe suffered extreme damage due to the intensity of the quake. Over 6,000 people lost their lives, and Kobe alone suffered nearly $100 billion in damages. Due to the layout of the city and poor disaster preparedness, the destruction suffered in Kobe was far worse than some believe it should have been. This devastation was prolonged by the widespread infrastructure damages that inhibited reconstruction and aid crews.

Yet, despite this, the Kobe Earthquake was a hallmark moment for the institution of volunteering. In the year following the event, over one million volunteers stepped up to help those in need. ‘”The changes that volunteerism has brought to our society is enormous,” says Takeshi Jitsuyoshi, who helped in Kobe after the disaster. The wave of volunteerism, he adds, “has slowly given rise to a quiet revolution in the country.”‘ (Kambayashi, 2005). This push for volunteerism was key to the implementation of the 1998 Law to Promote Specific Non-Profit Activities which made the creation and maintenance of small-scale NPOs more manageable.

While many of these volunteers lacked specialized skills, the outpouring of public aid was unprecedented for Japan. Many believe this was in response to the perceived failure of the government to protect citizens during the events and to render assistance in the aftermath. Although this may have it’s roots in a legitimate criticism of the government’s actions prior to the earthquake, after the earthquake the local government was just as hamstrung as it’s people. Tatsuki, (2005) comments on this, “Suddenly, they were put in a situation in which they could not count on the city office to take care of all or even any public needs. The city office itself had also become an earthquake victim. In this context, people learned how hard it was to survive as individuals, unconnected to other people. People then learned that they them-selves, not city officials, could respond to public needs and that people could weave public interests.”

Under the conditions, it is plausible that a large number of people could be pushed past their traditional mindset of depending on the government to guide them and take the reigns on recovery efforts. Yet, this wave of volunteerism is not as sudden as it may initially seem. Hasegawa (2007) comments on how NPO leaders had attempted to create a “social expectation” encouraging a shift towards a volunteer based society. The graph below, from Hasegawa’s Volunteerism and the State in Japan shows an increase in volunteering based newspaper articles before the 1995 Kobe earthquake even hit. Hasegawa uses this graph to show the shift from the term Hoshi to Borantia, but fails to note that the number of Hoshi related articles does NOT decrease, indicating the term was not replaced, but instead the two fill two different roles. 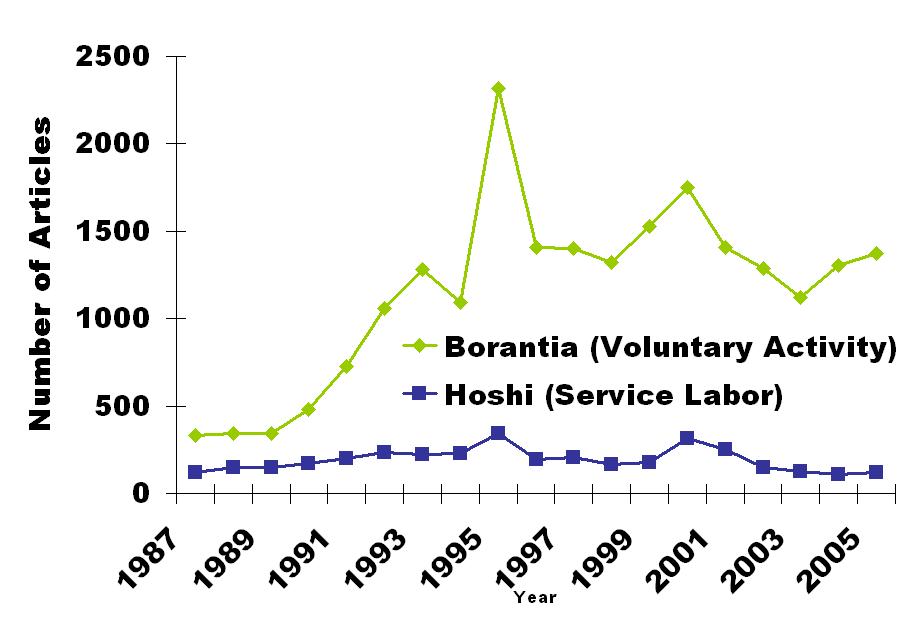 This changes the situation. While the Kobe earthquake is still clearly the catalyst for increased volunteer efforts, it is clear that people were working to shift cultural perception before it occurred. The public perception of volunteering has changed, quite possibly guided by the work done by NPO leaders to encourage a shift towards groups independent of government control. Hasegawa believes this to be true, citing such leaders as Yamaoka Yoshinori, among others, as having been pivotal in this societal transformation.

In the years that followed the Kobe earthquake, this could be seen quite clearly. “According to the Japanese Council of Social Welfare, the official number of volunteer groups almost doubled to 118,820 in 2003, from 60,738 in 1994. Some experts and activists believe the actual number is much larger.” Further, the number of NPOs nearly tripled from 2002 to 2005, going from 6,598 to 19,523. (Kambayashi, 2005) These numbers show that the growth was not simply reactionary, and that this sector posted steady growth even a decade after the earthquake. The events surrounding the Kobe earthquake, as well as the earthquake itself, have proven to be pivotal in the spread of volunteerism in Japan.