Until the Great Eastern Japan Earthquake, the Great Kanto earthquake stood as the strongest recorded earthquake in 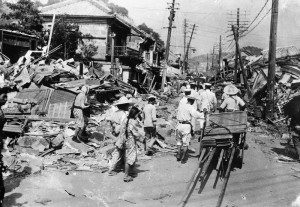 After the Kanto Earthquake

Japanese history, measuring 7.9 on the Richter scale. Occuring on September 1, 1923, the quake struck the Tokyo and Yokohama areas, killing over 140,000 people and leaving over 3 million homeless. The earthquake itself did not cause most of the devastation, but rather uncontrollable fires which rushed through the primarily wooden city. It was often recounted as being akin to hell, surrounded by walls of flame, smoke and death.

While tragic, and a terrible loss, the events that unfolded after the earthquake and fires are possibly more horrific. Not only are there practically no recorded examples of large scale volunteerism, but in it’s place are the formations of roving vigilante militias who were responsible for the deaths of numerous Koreans. There is much more to this subject than I intend to go into here, but it is important to note not only the lack of volunteerism, but the nearly inverse of volunteering, wherein people actively lash out against those who were as stricken as they were. Without analyzing this tragedy any further, you are still left questioning why there is so little evidence of volunteering. 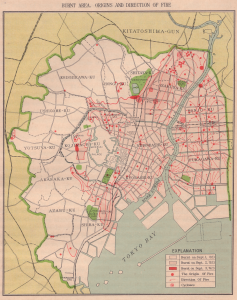 A map showing the areas with fire damage

One possible reason is the sheer scale. The damage to not only Tokyo, but also the surrounding areas, left roughly half of the population homeless and destroyed nearly all infrastructure. Considering the conditions, is it possible that there was almost nothing volunteers could do? Clearly those who hadn’t died or lost their homes were still suffering from the destruction, whether it was a loss of family, friends, work, neighborhood, etc. Even if the survivors were working to help each other, you’re talking about an affected area of over 10 million people. Was there anything people nearby could even do? Even with the mobilization of the Japanese military, the first reports from the stricken area call for more troops. According to Schencking (2012),”General Yamanashi later concluded that it took ten days for stability, peace, calm mindedness and public order to return. What it took in terms of manpower, he confessed, was equally extraordinary: nearly one in five members of Japan’s entire standing army had been deployed to Tokyo and Yokohama.”

Japan’s long history of autocratic government is a major factor in the group-oriented mindset of many Japanese. It would be easy to say that the lack of action was due to a cultural characteristic, that the people were so accustomed to relying on the government that they did not know how to act on their own. You could also point out that the Japanese are traditionally very insular in their own communities, and reaching out to others was not a common concept. At the 1998 World Volunteer Conference, Reuben Nelson, a Canadian Futurologist, claimed that factors such as recognition of a person as an individual and open psychological space were key to the growth of volunteerism. (Tatsuki, 2000)  As a country which did not become a true democracy until post WWII, at the time of the Kanto earthquake, people had little exposure to the traits Rebuen mentions. Years of autocratic government fostered quite the opposite mindset. There may be some truth to that line of thinking, but if you look at the political protests of the late 1910s and early 1920s, wherein the people of Japan participated in protests for universal male suffrage, you cannot say they were totally incapable of action. If the people felt strongly enough, they were capable of doing what they felt was right.

One of the very limited recollections of volunteerism in relation to the Kanto earthquake is tied to the Kwansei Gakuin University. Tatsuki (2000) writes about a Mr. Okura, a surviving victim of the 1923 earthquake who had called Tatsuki’s relief center after the Kobe earthquake, “He asked if our current relief activities are somewhat related to the 1923 relief activities. We later learned that our university students did organize relief volunteer center at that time in Kobe port. The center even sent a group of volunteers to Tokyo.” From this, we know that there were organized volunteer efforts, even if they were limited, and are left wondering if this sort of information simply failed to be reported on a mass scale, or if it was an isolated event. Tatsuki posits, “There existed a wide array of volunteers to help out people during the 1923 Tokyo earthquake.”, although I have found little evidence of that.

Even if you were to believe that there was a large, undocumented volunteer effort for the Kanto earthquake, there is still almost nothing from this point until the Kobe earthquake. Tatsuki (2000) points to the ‘1940 system’, a socio-economic set of policies that Japan used to prepare for WWII. Under this system, a highly centralized government was given great amounts of power, and the concept of ‘groupism’ was pushed to become part of the cultural identity. This is fairly interesting theory, although there is plenty of history previous to 1940 that alludes to Japan having a group focused mentality, although not to the extent often implied by the 1940 system. In addition, this concept does not magically preclude people from helping others. In combination with a learned reliance on authority figures for instruction, however, this concept could theoretically result in a culture where people are unsure of whether they should be the one to take action first, or that someone else will be responsible. This is sometimes referred to as the ‘bystander effect’, and is not a cultural phenomenon unique to Japan, although some claim it is far more prevalent there. While it is far from empirical evidence, it is certainly a possible factor in the lack of volunteer history after the Kanto earthquake.