The events of 3/11 have spawned an immense public outreach of volunteerism. According to Japan Today (2014), over 1.3 million people have volunteered in the Tohoku region since 3/11. In the immediate aftermath, it’s easy to understand why people rush to help. People are starving, injured, without shelter and depend on aid from others to survive. Yet even today, three years later and with a majority of the simple labor volunteers are preferred for finished, there are dozens of groups active in the area, working to help rebuild. From assisting fishermen with their day to day, to working with children, these volunteer groups are doing what they can to improve the lives of those still suffering from the effects of the disaster. What drives these people to sacrifice to help those in need? 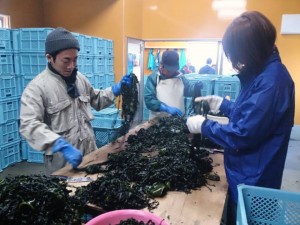 The most obvious solution, and the one that is easiest for most people to relate to, is the desire to help. Even if it’s just the intangible feeling that something must be done, it’s a basic human emotion that everyone has experienced at some point in their life. This is the most common answer you’ll hear if you ask a volunteer why they did so. When I asked my friend Yuu (Who spent two months in 2011 volunteering in Ishinomaki, as well as a week in 2014) why he volunteered, he replied, very matter of factly, “I thought that something had to be done, I had to go”, and after a short pause was quick to add, “And I had a long vacation” which, while kind of humorous in a way, reflects an important aspect of Japanese society. The shift towards “social expectation” of volunteerism in Japan has led to developments such as companies allowing paid time off to perform volunteer duties during the aftermath of the Tohoku event. Although those offering paid time off may be the exception versus the rule, there are a number of Japanese companies encouraging employees to volunteer, granting them time off in order to go volunteer. Initiatives such as these may help sway those who feel a desire to help, but are worried about losing their employment to help. 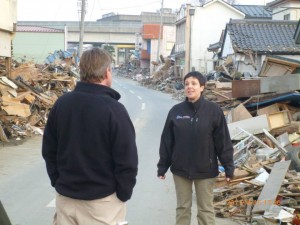 Amya giving an interview with CCN in 2011

Some, such as Rikuzentakata’s global public relations director, Amya Miller, go forward with it anyways. Initially acting as an interpreter for a US based NPO in Ofunato and Rikuzentakata, Amya’s involvement in critical communications between organizations meant that when she parted ways with her NPO, Rikuzentakata’s Mayor Toba was quick to ask for her help. Working pro bono, as of March 2015, she will have spent 4 years volunteering in the Tohoku region, her visa sponsor covering her housing and a small stipend for food. Although she’s quick to point out that she couldn’t do what she does without the support of her sponsor and her husband, at the end of the day she’s one of a very small number of people who are willing to sacrifice so much for people she did not know before she began working there. An outsider might wonder what motivation she, and others like her, had to travel across the world at their own expense to help strangers. For people like Amya, they volunteer because, “I knew I could help”.

Others, such as ‘Mr. Kawakami’, a pseudonym used by Watanabe (2013) in her article on post-disaster recovery, help because they feel indebted. While it’s speculation, I would assume this isn’t his sole motivation for helping, more that it is the extra push some people need to take action in a situation where they feel obliged to help but may not be able to make the commitment. Mr. Kawakami told her, “People have helped us and taken care of us so much since the 2004 earthquake, and so we wanted to go to Ishinomaki to help in whatever way we could.” Perhaps in the future those who are currently suffering will find themselves in a position where they can provide for disaster victims, and the memory of volunteers coming to their aid will drive them to give.

Although it may appear less honorable or noble than other motivating factors, survivor’s guilt is a very real force that drives some to volunteer. Fuyubi Nakamura, a Japanese national in Argentina at the time of the Tohoku earthquake  writes, “Perhaps with a kind of survivor’s guilt and desire to do something, I went off to Miyagi in Tohoku”. (2012) It would be unrealistic to assume Nakamura is one of a kind, given the sheer scale of the event and the number of people touched by the event. For the people who live with this, volunteering may serve as a therapeutic way to deal with it, while at the same time serving those in need.

Because of the personal nature of volunteering, it is almost impossible to state with clarity what drives people to do it. By looking at personal accounts we can get a better grasp of the multitude of reasons that could motivate a person to help others.