For my second post, I want to describe for you the mastery-based system that I used for my first attempt, but before I do that, let me give you a quick overview of the course in which it was used.

This is a general education course and one that I taught in each of my previous two semesters at Trinity. The course content and assessments have evolved through the semesters, with the course covering the following four units (some associated topics):

Before implementing the mastery-based system, assessment in this course consisted of unit exams, regular homework assignments, written responses to articles relating the topics to politics, and a group project.

Keeping in mind my goals from the last post of procedures vs. concepts, simple and transparent, and including a retake system, here’s the grading system I used in Fall 2019:

I translated content goals from having taught the course before into explicit learning objectives in which students must display mastery. Each unit had their own set of objectives with half of them categorized as “Procedural” and the other half categorized as “Conceptual” objectives based on the associated level of thinking. There was a total of 76 objectives split almost equally across the four units:

These objectives were assessed through in-class quizzes and exams. For the first two units, two quizzes were given only covering procedural objectives and the exam covered all of the conceptual objectives. Part of the motivation for this was having 50 minute class periods and not wanting students to use any of that time going through any potentially tedious (procedural) calculations. For the last two units, the quizzes and exams covered a mix of objectives, but this was a result of the way the content was organized as opposed to an intentional shift in structure.

The regular homework assignments were maintained but could not count towards demonstrating mastery. They were graded simply on based on completion and were used as an opportunity for students to gain practice and feedback on their progress towards the objectives rather than as a higher-stakes portion of their grade based on correctness. See below for how these assignments contributed to their final letter grade.

The written responses were maintained but streamlined for students to only answer questions that I viewed as the most crucial to get out of the article and to briefly reflect on the political context. The main point of each article (one per unit) was included as one of the procedural objectives and successful completion of the assignment was enough for students to demonstrate mastery of that objective.

The group project was also maintained and streamlined compared to the previous semesters. The project was for students to create their own new congressional district map for a state using an online web application and to write a brief report on the history of redistricting in that state and to show the efficiency gap and compactness calculations of their proposal which they had learned in that unit. The main goals of the project were translated into 3 of the 10 conceptual objectives for that unit.

To ensure that students had easy access to their objectives at all times, I created a Google spreadsheet with all objectives separated by unit and separated by procedural/conceptual. Each objective had a checkbox next to it that I would mark when students achieved that objective and I set up conditional formatting to highlight the objective green when it was mastered.

Logistical note: I created one master spreadsheet file with a tab for each student and then a separate file for each student that was shared with them and automatically synced to their tab on the master file. This is why I had to use Google Sheets because Excel Online doesn’t support syncing from another file. Below is a screenshot of the spreadsheet (click to enlarge). 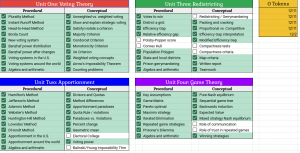 To address retakes and support student’s control over their learning, I created a digital token system and gave each student 5 tokens to use for the semester. Each token could be used to retake up to 2 objectives or to submit a homework assignment later than the deadline. There was also an opportunity to earn an extra token for an excellent group project report. Students could retake objectives at any time during the semester and could retake any objective multiple times if needed. Using a token to retake objectives consisted of coming to office hours and me providing them with new questions related to the objectives for them to demonstrate mastery. As you may have noticed, tracking their tokens was also a part of each individual’s spreadsheet.

As you might imagine, many of these tokens were used at the end of the semester as students saved them to see how many objectives they would need to retake. More on this and other reflections coming in the next post!

To convert a student’s mastery of objectives into a final grade, I created and used the conversion table below which factored in the number of objectives checked off in the procedural and conceptual categories separately as well as the number of assignments completed and their attendance and participation in the class. You can see the table below taken from the course syllabus (click to enlarge) where your final grade would be the first row in which you met all four categories. For example, if you completed all assignments, attended and participated in class, mastered 35 procedural objectives, and mastered 29 conceptual objectives, your final grade would be a C+ as you would not have achieved every column in any of the rows above that grade. 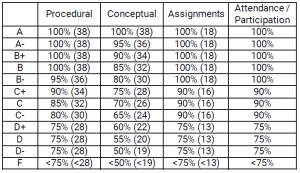 Part 3 will be some of my reflections on how various components of this system actually worked and thinking about some changes for next semester!