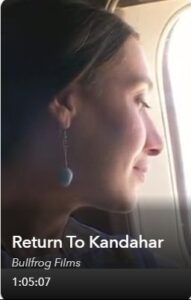 The library’s licensed resource Docuseek offers films tracing the history of Afghanistan and offering a perspective on the past four decades in that country. For example:

Afghanistan 1979: The War that Changed the World focuses on the Soviet invasion, starting a war which lasted ten years and played a role in the collapse of the Soviet Union; Return to Kandahar offers an unique perspective from Canadian-Afghan actress Nelofer Pazira, star of the movie Kandahar, who returns to Afghanistan after the fall of the Taliban in 2003 to seek out her childhood friend Dyana, whose story inspired that film; and A Home Called Nebraska introduces viewers to refugees who escaped war, torture and persecution in countries such as Afghanistan and Syria, and the Nebraskans who welcomed them and aided them in their transition to life in the United States.