The Connecticut Supreme Court On Circuit At Trinity College 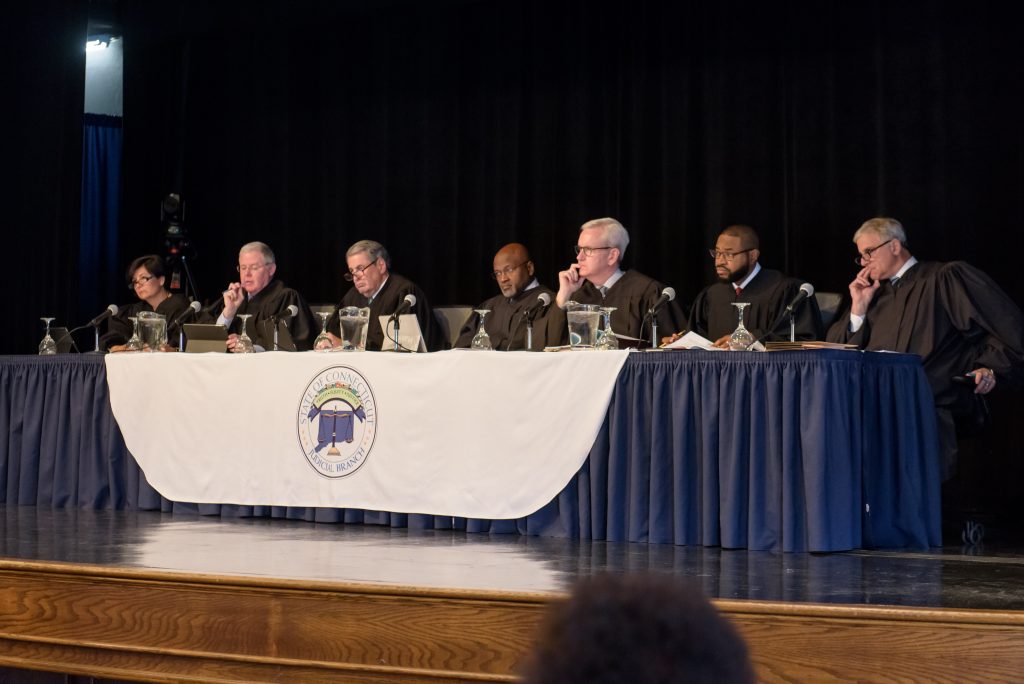 On Wednesday, October 17, the Supreme Court of the State of Connecticut visited Trinity College and heard two cases as part of their On Circuit program. The event was sponsored by the Public Policy and Law Department, the Political Science Department, the Pre-Law Society, and the Trinity Mock Trial Team. This was the first time that the Court has visited Trinity and was especially significant as two Trinity alumni serve on the Court: Associate Justice Richard “Dick” Palmer ”72 and Senior Associate Justice Christine S. Vertefeuille ’72. The hearings offered students, faculty, and staff an opportunity to witness the appellate process in action and Public Policy and Law students, among others, had an opportunity to question the litigators after the arguments.

The first case, State of Connecticut v. Jean Jacques, SC 19783, was argued by S. Max Simmons on behalf of Jacques and David Smith on behalf of the State of Connecticut. This case concerned the admissibility of evidence, viz. a bag containing drugs and the victim’s cellular telephone, that Simmons argued had allegedly been obtained without a search warrant of Jacques’ apartment. Jacques was found guilty of this 2015 murder in Norwich, Connecticut by the district court.

Smith, on behalf of the State, contended that because Jacques’ lease had expired several days before and his landlord had consented to the search, a warrant was not necessary. Further, Smith argued that Jacques had forfeited his right to a reasonable expectation of privacy under the Fourth Amendment as he had “abandoned” the property in question. Simmons, on behalf of Jacques, argued that the State had failed to demonstrate an intent to abandon the property. Thus, the search was warrantless and in violation of Fourth Amendment protections.

The justices were particularly concerned in this case with Connecticut housing law and in defining what constitutes “abandonment” under the law. Both attorneys conceded that they had limited knowledge of housing regulations in the state, but nevertheless attempted to navigate the law’s complexities. Justices noted that parolees, as Jacques was at the time, generally have a lesser expectation of privacy. Conversely, other justices noted that Connecticut housing law allows for a “grace period” in payments and that, with that period considered, the search was several days early and, thus, potentially contrary to Fourth Amendment protections. The State opted not to argue the typical response that, even if the evidence were obtained illegally, the conviction should still stand under the doctrine of harmless error. 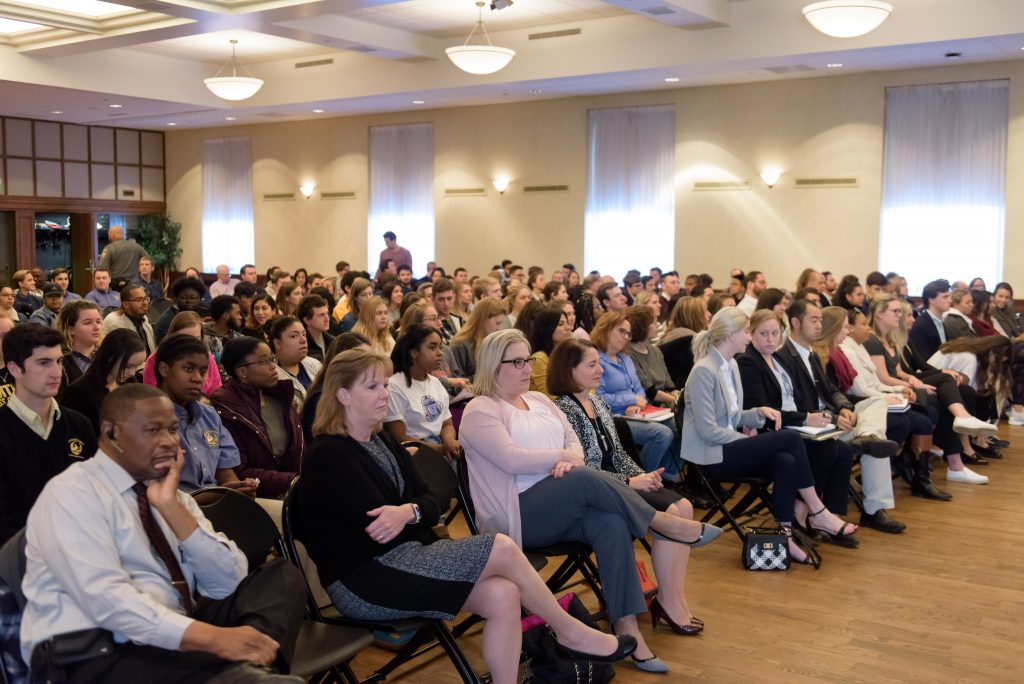 The second case, Austin Haughwout v. Laura Tordenti et al., SC 20076, was argued by Mario Cerame on behalf of Haughwout and Ralph Urban on behalf of the Office of the Connecticut Attorney General. This case dealt with the following series of remarks made by Haughwout, a former student at Central Connecticut State University (CCSU): “(1) made hand gestures as if he was aiming a gun and shooting at other students, (2) wondered aloud how many rounds he would need to shoot people at the school, (3) mentioned that he had bullets at his home and in his vehicle, (4) showed pictures of guns he owned and bragged about bringing a gun to school, (5) named a particular student as his ‘number one target,’ (6) made reference to a shooting at an Oregon community college where several students had been killed and stated that the Oregon shooting had ‘beat us,’ and (7) stated during a testing of the school’s alarm system that ‘someone should really shoot up the school for real so it’s not a drill.'” Haughwout was subsequently suspended, after appearing before a review panel, from CCSU for the aforesaid statements.

Cerame began his arguments by disputing that Haughwout ever made the remarks, a contention that was promptly dismissed by the justices, who noted that they had before them the findings of fact discerned by the previous judge. Cerame argued that the statements do not rise to the level of a “true threat” and contended that Haughwout was within his rights to make the statement. Cerame also dismissed that the school had any right to take punitive actions against Haughwout for his statements. Several justices found disagreed with Cerame’s contention that the school could take no action against Haughwout for his remarks.

Urban argued, based upon the totality of the statements, that they amounted to a “true threat” and thus constituted an exception to the First Amendment freedom of speech protections. The justices challenged both Cerame and Urban, questioning how the Court should best evaluate each statement. Urban argued that the statements must be taken in their “totality” and when this is considered, that they constitute a “true threat,” whereas Justice Andrew McDonald expressed dissent with this line of argument.

The justices also challenged Cerame on the notion that Haughwout had every right to make these statements, even in the context of a college. Justice Steven Ecker raised concern with how Haughwout targeted individual students and also highlighted the importance of the fact that students both live and work on a college campus, which makes the environment in which the speech occurs markedly different. The Court seemed to struggle most with the fact that there has not been considerable litigation around the nexus of “true threats” and college campuses at both the state and the federal level.

The decisions in both of these cases will be available for review at the Court’s website at the end of the term. 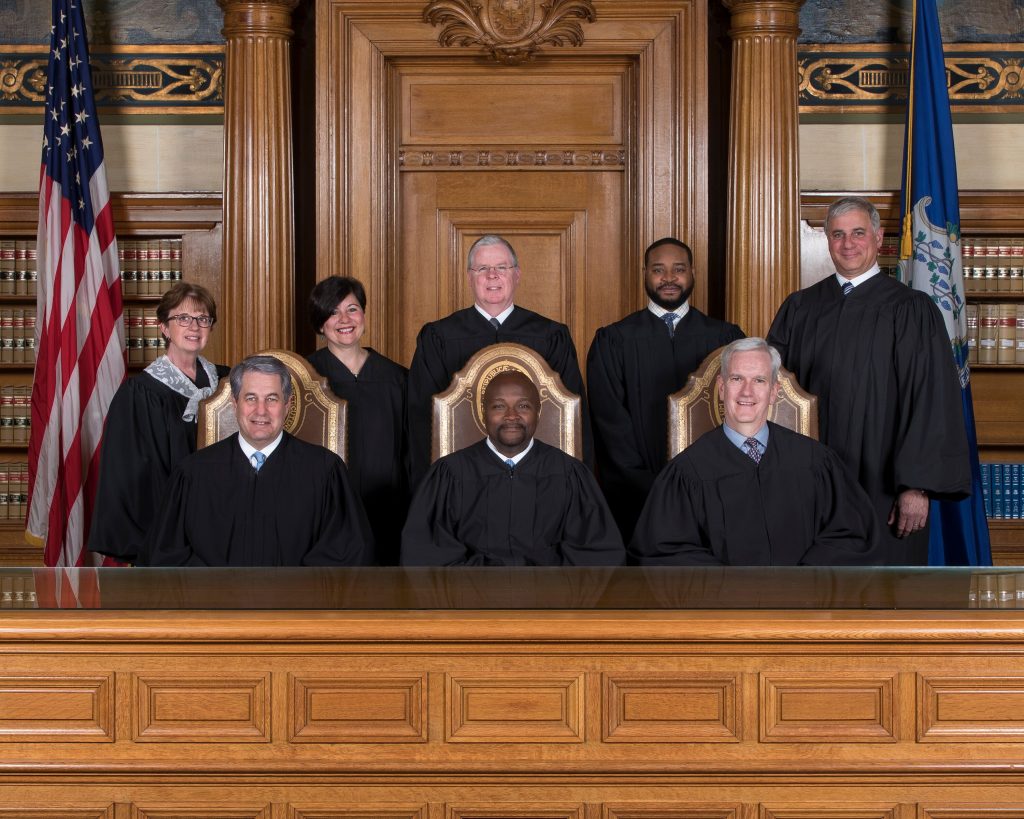 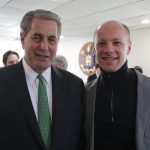 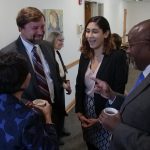 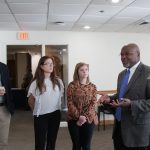 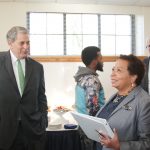 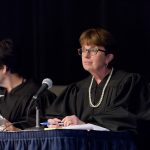 Senior Associate Justice of the Court Christine Vertefeuille ’72 during the oral arguments. 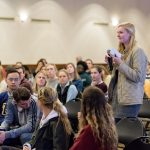 Lillie Lovell ’22 asks a question to the litigators following the first oral argument in State of Connecticut v. Jean Jacques. 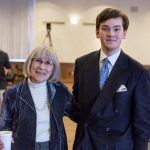 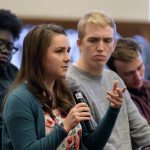 Senior Public Policy and Law major Kira Eidson ’19 asks a question to one of the litigators. 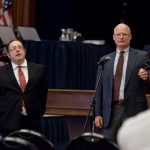 Mario Cerame for the Petitioner and Ralph Urban for the Respondent answer student questions about the second case, Haughwout v. Tordenti et al.

This entry was posted in "Why Declare PBPL?", Focus on Faculty, Lectures, Special Events, Spotlight on Alums. Bookmark the permalink.