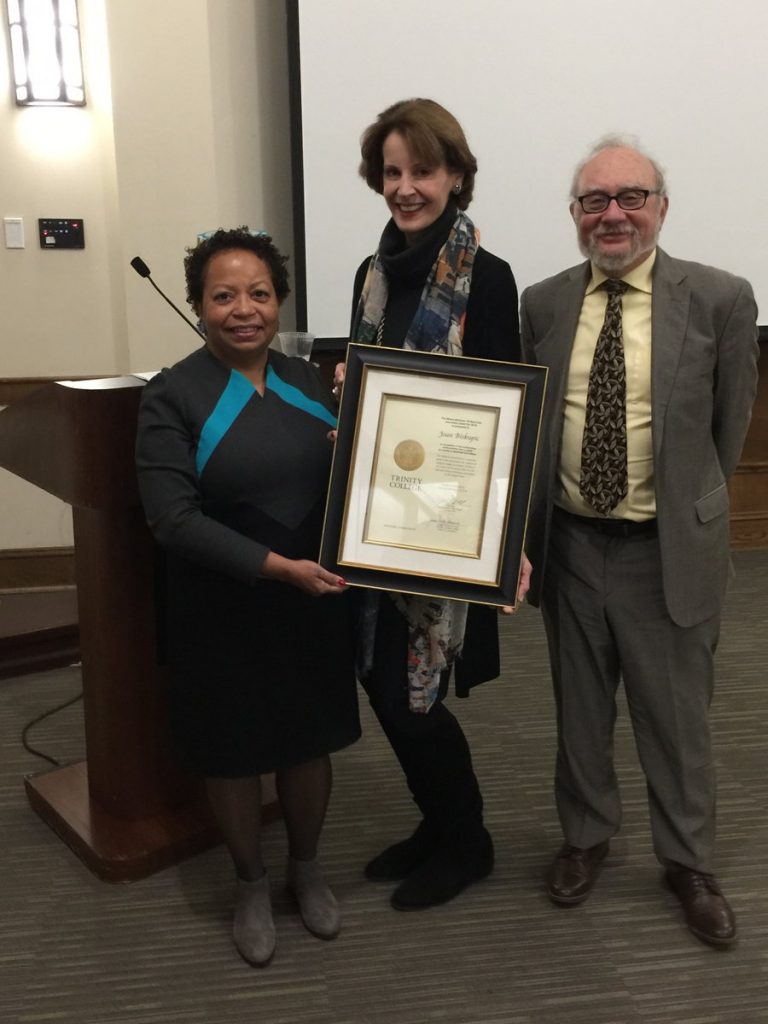 The Trinity College Program On Public Values and the Leonard Greenberg Center for the Study of Religion in Public Life awarded the Moses Berkman Memorial Journalism Award to Joan Biskupic, a CNN commentator, legal analyst, and author on the United States Supreme Court, on Thursday, November 15th, 2018.

The Public Policy and Law Program proffers its earnest congratulations to Joan for the Award and our gratitude for visiting and sharing her work with Trinity.

The Moses Berkman Memorial Journalism Award is “supported by The Moses and Florence Berkman Endowed Fund at Trinity College, in honor of the late Moses Berkman, Class of 1920. Moses Berkman was an outstanding journalist who served the Hartford Times as a political correspondent, columnist, and editorial writer from the early 1920s until his death in 1956,” according to the Greenberg Center’s website. You can read more about the award and past recipients here.

The Trinity College Program on Public Values is the umbrella organization that oversees the Leonard Greenberg Center for the Study of Religion in Public Life and the Institute for the Study of Secularism in Society and Culture (ISSSC). The Program is chaired by Public Policy and Law Program Director Renny Fulco.

Biskupic has written many biographies about the justices of the Supreme Court, including Sandra Day O’Connor: How the First Woman on the Supreme Court Became Its Most Influential Justice (2005), American Original: The Life and Constitution of Supreme Court Justice Antonin Scalia (2009), and Breaking In: The Rise of Sonia Sotomayor and the Politics of Justice (2014). Her newest book, The Chief: The Life and Turbulent Times of Chief Justice John Roberts, will be released in March 2019. You can purchase the book once it is available here.

Biskupic delved into her research for her newest book in a talk titled “Covering and Uncovering the Roberts’ Supreme Court” Thursday afternoon. During the talk, Biskupic examined the climate of the Court under Roberts. Biskupic drew from her previous biographies to inform her discussion of Roberts, citing key differences between Roberts’ character and that of other justices.

Biskupic described Roberts’ perceptive qualities, noting that in her many interviews, she had to remind herself that “she was the one interviewing him” and not the other way around. Biskupic contrasted Roberts with Scalia, whom she had previously interviewed on many occasions, noting that many of her conversations were animated and that he would later provide considerable personal material for her to work with. Roberts, conversely, was more personal and did not reveal as much during interviews.

Beginning with Roberts’ earliest years, Biskupic chronicled his studious nature and elite education, examining his rise from an associate counselor in the White House to his appointment as one of the youngest Chief Justices ever to serve on the Supreme Court. Further, Biskupic noted that Roberts was not the original selection of Bush for the seat of Chief Justice, but that former Chief Justice Rehnquist’s death resulted in his sudden elevation.

Biskupic also examined the history of Roberts’ political positions, noting his brand of conservatism that has been tempered in the past. Roberts, Biskupic explained, is known for his deciding vote with liberal justices upholding the constitutionality of Obamacare in National Federation of Independent Business v. Sebelius, 567 U.S. 519 (2012), but is equally well-known for delivering strong conservative opinions, such as those declaring unconstitutional certain provisions of the Voting Rights Act of 1965 in Shelby County v. Holder, 133 S. Ct. 2612 (2013). The divergent views in these cases reflect, suggests Biskupic, the ambiguity surrounding Robert’s image.

Considering the special role of the Chief Justice of the Court in setting the tenor of the Court over a lengthy period, Biskupic remarked: “We have had 45 presidents and only 17 chief justices–I think that is pretty telling.” The role of the Chief Justice, argued Biskupic, transcends the political milieu, stretching often across several administrations of differing political persuasions. This creates a role that is as much about balancing the different perspectives of the justices in private interactions as it is about directing the Court’s conduct during oral arguments.

For Roberts, notes Biskupic, the Court is consistently delivering more 5-4 decisions, making it more difficult to propagate the message of unity and camaraderie. The increasing divisiveness of the Court, added Biskupic, was reflected in interviews that she has conducted with many justices. Biskupic concluded by reflecting on Roberts unique position as Chief Justice during a contentious period of political and litigatory history, adding that she hopes her book will illumine the world of Roberts and the Court further for readers.

Biskupic was thereafter honored by a dinner in Hamlin Hall with Trinity College President Joanne-Berger Sweeney and other distinguished faculty, students, and guests in attendance.

Biskupic was joined by her editor, Dan Berman ’01, an Assistant Managing Editor for CNN Politics, Trinity College alumnus, and former advisee of Public Policy and Law Program Director Renny Fulco. Berman, also a former Editor-in-Chief of The Trinity Tripod, met with current Tripod editors Thursday morning to discuss careers in journalism and thereafter spoke with Renny Fulco’s Introduction to American Public Policy class about his experiences at Trinity and CNN. Berman later joined Biskupic to speak with Mark Silk’s Journalism and the Public Good class, where topics included CNN, the Supreme Court, and the current relationship between journalism and the media.

Biskupic was interviewed by the author and Ben Gambuzza ’20 for The Trinity Tripod’s November 13 issue. The interview as it appeared in print is republished here and gives further insight into Biskupic’s life and work:

Joan Biskupic, CNN Legal Analyst and prominent Supreme Court biographer, is coming to Trinity this Thursday to talk about her forthcoming book on the Roberts court: The Chief: The Life and Turbulent Times of Chief Justice John Roberts. The talk will be at 4:30 in Terrace Rooms B and C above Mather dining hall. Before her arrival, The Tripod talked to her about her life in journalism, the state of the Supreme Court, and the state of the media.

Biskupic has covered the Supreme Court for 25 years. Before coming to CNN, she was the Editor in Charge of Legal Affairs for Reuters from 2012 to 2016. She also covered the Supreme Court for The Washington Post from 1992-2000. Her work got her on the finalist list for the Pulitzer Prize in Explanatory Reporting in 2015. She has since moved into the book-writing scene. She has written biographies of Sandra Day O’Connor (2005), Antonin Scalia (2009), and Sonia Sotomayor (2014). Her new book explores the exact motives of Chief Justice Roberts, whom people know as conservative, but who has, from his appointment in 2015, claimed that he would act as a neutral umpire in court decisions.

She earned her B.A. in Journalism from Marquette University, an M.A. in English from the University of Oklahoma, and her J.D. from Georgetown University Law Center. Calling from her home in Washington D.C., she related how she got her start in journalism. She said, “I always had the bug for journalism.” She started as a high school journalist and had her first newspaper job at the Milwaukee Journal of Wisconsin. She told us, “I was always intrigued by the rules and laws,” to explain how she became interested in the Supreme Court specifically. In the 80s and 90s, she covered the David Souter and Clarence Thomas confirmation hearings.

Biskupic was asked about the similarities or differences between the Thomas hearings in 1991 and the recent controversial Kavanaugh hearings this year. In describing the parallels between Anita Hill’s testimony and Christine Blasey Ford’s, Biskupic stressed both men’s similar reactions. Clarence Thomas criticized the hearings as a “high tech lynching,” according to Biskupic, while Kavanaugh saw it as a “partisan attack.” While both women had “very credible” testimonies, they were treated “very unfairly.”

With the Kavanaugh hearings, the Supreme Court was thrust into the public eye as an institution of contention. So, we were curious about her thoughts on the institution in general. As to its sustainability in the present model of nine justices, Biskupic said the model is sustainable. And although some commentators argue for an elected Supreme Court by the people, she thinks it would be nearly impossible, for it would take a Constitutional amendment.

Biskupic also addressed her relationships in the media, noting that journalists who cover the court are “really serious” about the material that they cover and tend to not have strong ideological bents. Biskupic also joked that “the justices are appointed for life, and the reporters must think they are too,” noting that so many of her colleagues stay on the same beat for much of their career.

Biskupic cited the competitive but collegial atmosphere as well, especially amongst the relationships she forged while working at The Washington Post, among others.

There is one problem with the Court, though: partisanship in America. Biskupic believes, with many, that America is becoming more and more polarized, and that the Supreme Court reflects that. She emphasized that “five [Republican] Justices have been appointed by Republican Presidents, and the four Democratic justices have been appointed by Democratic Presidents.” The importance of the Court is also reflected in the sheer minuscule number of Justices who have actually served since the Country’s inception: “We have had 45 presidents, but we have had only 17 chief justices. Just that statistic alone tells you how important the role of Chief Justice John Roberts is today.”

Biskupic thinks that Roberts is an “enigma.” His enigmatic reputation and the ability to square his conservatism with his seeming desire to be neutral is what Biskupic is trying to flesh out. “What I am hoping to do is illuminate this man who sits at the top of the third branch and makes you understand him as a person as well as someone who is so in control of the law of the land.”

In offering closing advise to college students over how to know what’s really going on in this world, she says “just get news.” We asked if she thinks the physical newspaper will die out soon. She hopes not, because she still gets the paper at her house. But she says, “I’m not dismayed by people not picking up a newspaper anymore, I am more dismayed when people do not look for many sources of news—objectives sources of news.”

This entry was posted in Current Events, Lectures, Special Events, Spotlight on Alums. Bookmark the permalink.