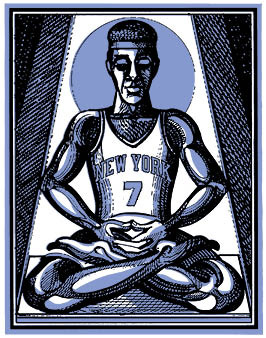 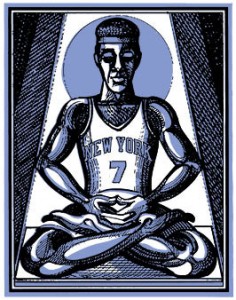 On March 2, four ATVs set off into the blistering Colorado Desert, 122 miles east of Los Angeles, in search of understanding.

The trip was dreamed up by Phil Jackson, the famed coach whose teams have won 11 NBA championships. With him were James Dolan, the unpopular owner of the struggling New York Knicks, and the team’s general manager, Steve Mills.

“I had a guide lead us on a wild chase across the desert in all-terrain vehicles, to see how my future colleagues would respond in hostile territory,” wrote basketball’s “Zen Master” in a July update to his 2013 best seller, Eleven Rings: The Soul of Success.

While no one knows exactly what went down—fan forums were convinced peyote was involved—Jackson returned from the desert not as coach of the Knicks but as president (with a $12 million annual salary). Even more surprising, the infamously hands-on Dolan conceded that he would be the one to call the shots.

Jackson’s explanation of what was hailed as a miracle? “Under the clear desert sky, Jim and I had a meeting of the minds.”

Celebration was general over Manhattan. After all, Jackson had played on the last Knicks team (1973) to bring home the championship. But questions remained.

Had his use of Zen Buddhist practices really helped lead the Chicago Bulls to six titles and the Los Angeles Lakers to five? Would his alternative spirituality fly with the skeptical New York media, players, and fans? And most important, could his mysterious mojo turn around a seriously demoralized franchise?

On March 18, he was given a returning hero’s welcome at a Madison Square Garden press conference to officially announce his new position. Reaction in the press was positive, even giddy, as it played up his mystique.

Even the Daily News’ wary Mike Lupica described the hiring of the “the coolest guy in the room” as a “no-brainer, even for James Dolan.” Only Lupica’s colleague Frank Isola tried to spoil the party, calling Jackson “an aging 68-year-old former hippie looking for one final shot at glory.”

Also hoping for a miraculous reset were the player-survivors of the 2013-14 season, which had been marred by injuries, lack of draft picks, Mike Woodson’s lackadaisical coaching, guard Ray Felton’s arrest on gun charges, and the painful-to-watch over-reliance on six-time All Star and Olympic Gold Medalist Carmelo Anthony, a high-scoring small forward who played the most minutes per game in the league even as he inched towards 30.

Gifted but erratic shooting guard J.R. Smith, fined in the fall of 2013 for untying opposing players’ shoelaces during foul shots, tweeted his approval: “Can’t wait to work with the great @PhilJackson11 #TheZenMaster.” One-time star forward Amare Stoudemire told the AP’s Brian Mahoney, “He is a champion and a leader.”

Anthony, facing the option of free agency, played it cool. Praising what Jackson could bring to the team (“his philosophy, his mindset, his résumé”), he told ESPN March 13, “I don’t think it’ll have any effect on me, just as far as what I’m thinking or my decision.”

As for the fans, two days after the announcement, Jackson won a standing ovation at the Garden in a win against the Indiana Pacers. “With the Zen Master watching from the sidelines, Anthony scored 34 points—with five assists and three steals thrown in for good measure,” wrote the New York Post’s John DeMarzo.

To be sure, the page the East Coast media and fans were on was Urbandictionary.com’s, which defines “zen master” as simply “A nickname for former Bulls and Laker’s coach Phil Jackson, because of his use of Buddhist [sic] philosophy in basketball”—as in, “How did Phil keep all of those punk baby beeyitches together for so long? Because he’s the Zen Master.”

By contrast, when Jackson was asked about the nickname by Hugh Delehanty on WSB-TV Atlanta, he answered, “There is no such thing as a Zen Master. No one will master Zen. The ephemeral moment to moment is all we are fortunate to have.”

Perhaps a little Zen Buddhism 101 is in order for sportswriters in the country’s biggest media market. Originating in China in the 6th century, Zen emphasizes meditation (zazen) in order to discover one’s true self, let go of the ego, be mindful of one’s actions, and develop compassion for others.

Although one of Buddhism’s smaller schools, Zen has traveled to Vietnam, South Korea, Japan, and to the West. It often makes use of a teacher (only proclaimed “Master” posthumously) who answers students’ questions with inscrutable responses (koans) that bring understanding only after long reflection.

Jackson writes about his unlikely spiritual journey towards Zen practice in his 1995 book, Sacred Hoops: Spiritual Lessons of a Harwood Warrior. Greatly influenced by the works of Shunryu Suzuki, the monk and teacher who helped popularize Zen Buddhism in the United States, Jackson wrote that in sitting zazen, “I learned to trust the moment—to immerse myself in action as mindfully as possible.” For him, the goal of Zen was “not just to clear the mind, but to open the heart as well.”

Like many Western followers of Zen, Jackson was not born into Buddhism. Raised in rural Montana as the son of two Pentecostal preachers, he expected to follow his parents’ strict religious path. But in spite of daily Bible readings and long services, Jackson found himself unable to experience the Holy Spirit by speaking in tongues, which his parents saw as rebellion. “Rather than rejecting their faith outright,” he wrote, “I dodged services and started working on my jump shot.”

After studying religion and philosophy in college, Jackson wandered the West most summers in a van, looking to Native American beliefs, progressive Christianity, and yoga to replace what he saw as the restrictions of his family’s faith. In Zen he found a practice that did not necessarily preclude other belief systems—something that proved helpful when he introduced it to his ever more ethnically diverse basketball players.

So what? Some would say that a turnip could win championships coaching the likes of Michael Jordan, Scottie Pippen, and Dennis Rodman in Chicago, and Shaquille O’Neal and Kobe Bryant in Los Angeles. But in Eleven Rings, Jackson explains that the players’ clashing personalities, outsized egos, insecurities, and jockeying for dominance made coaching difficult. “If the players don’t have a sense of oneness as a group,” he writes, “your efforts won’t pay off.”

Jackson started his players off with 10-minute meditations during practice to facilitate “taking a more mindful approach to the game and to their relationships with one another.” To build trust and unselfish play, Jackson tried scrimmages with the lights turned down low, silent practices, and simply observing players who liked to act up. Incorporating his interest in Native American beliefs, Jackson called players to meetings by beating a drum, and hung tribal artifacts in his office. He taught them about having respect for your enemy, be it a wolf or a New Jersey Net.

He even pulled some techniques from his Pentecostal bag of tricks, placing the pre-season Bulls behind a line and telling them, “God has ordained me to coach you young men, and I embrace the role I’ve been given. If you wish to accept the game I embrace and follow my coaching, as a sign of your commitment, step across that line.”

When it comes to basketball strategy, Jackson believes strongly in the little-used triangle offense, an approach that stresses passing the ball to whoever has the best position to score. “Basketball contains larger truths for Jackson, and the triangle is the key to unlocking those truths,” wrote Grantland.com’s Zach Lowe, one of the few sports analysts who appreciate the intersection between his spirituality and his technical approach to the game. “Any team that hires him should be prepared to install it and commit to it.”

After the initial enthusiasm, New York sportswriters began to get antsy when Jackson had trouble meeting his first big challenge, hiring a new coach to replace Mike Woodson. His initial and seemingly only choice, Steve Kerr, who had played for him in Chicago, instead went to Oakland to coach the Golden State Warriors—this, after it was reported that he had given Jackson a verbal OK.

“Phil Jackson failed in his first, very public task,” pronounced Barry Petchesky of Deadspin.com May 15. “In the embarrassing aftermath of the Steve Kerr fiasco, Phil Jackson was described by one league executive as ‘looking like a beaten man already,’” sneered the Daily News’ Frank Isola.

Jackson himself spoke philosophically about Kerr’s decision, telling reporters in a question-and-answers session May 30, “I understood entirely the process he was going through.”

On June 10, the Knicks announced that the new head coach would be Derek Fisher, who had won five championships as a guard with Jackson’s Lakers. The next challenge, a bigger one, came on June 22, when Carmelo Anthony decided to opt out of the final year of his contract and test free agency.

As stories about Anthony being courted by the Bulls, the Lakers, and others, began bouncing around the Internet, fan forums started sounding suicidal. Knicks’ bean counters fretted about losing the player who guaranteed a sold-out Garden for every game, whose official jersey (number 7) had outsold even LeBron James’ during the 2012-2013 season.

When asked about re-signing Anthony at an April press conference, Jackson had responded with Zen equanimity: “If it’s in the cards man are we fortunate. If it’s not in the cards, man are we fortunate and we’re going forward anyway.” He challenged his star to return for less than the allowed maximum salary of $129 million and a five-year contract, to give the team the cash to sign another top player in 2015.

Ironically, it was Isola—whose long feud with the Knicks organization got to the point of his never being called on in press conferences until Jackson broke with tradition—who on Tuesday, July 9 tweeted the rumor that turned out to be true: “Thursday is decision day & it looks like Melo’s coming home.”

Isola reported that Jackson had flown out to Los Angeles the previous week and engaged the wavering Anthony in an evening-long conversation. Although we don’t know exactly what was said, the bottom line was, according to Isola’s source, “I Believe in Phil.”

Thursday turned into Sunday as Anthony waited out LeBron James’ decision to return to the Cleveland Cavaliers and the Northeast Ohio love fest that followed. He finally announced his return (with a discount of seven million dollars from his max salary) with a statement on his website that pointed to the desire to win a championship in the city of his birth.

Of course, the questions remain. Will Jackson stabilize the franchise and chill out the “catastrophe or triumph” auto-settings of much of the New York sports media? Can he and Derek Fisher make the triangle system work, turn the Knicks into an enlightened band of brothers, and at least snag a spot in next season’s playoffs?

What we do know is how the Zen Master sees the way forward. As he writes in the introduction to Sacred Hoops, “Like life, basketball is messy and unpredictable. It has its way with you, no matter how hard you try to control it. The trick is to experience each moment with a clear mind and open heart.”