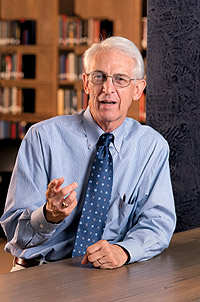 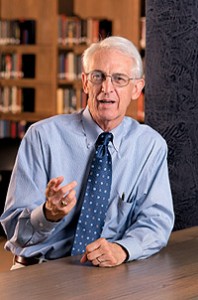 The last Public Values lunch of the semester was devoted to a discussion of The New Atheist Denial of History by Trinity Professor of History emeritus Borden Painter. Published by Palgrave Macmillan in November, the book focuses on the use of history in best sellers making the case against religion by leading “New Atheists” Richard Dawkins, Sam Harris, and the late Christopher Hitchens.

As Painter sums up his assessment of their treatment of the twentieth century: “The collective view of these three authors…commits errors of both omission and commission by the selective use of evidence that skews, distorts and, at times, misrepresents the past. It plays fast and loose with definitions of ‘religion,’ ‘secular,’ ‘dogma,’ ‘rational,’ ‘evidence,’ and other words central to the subject they choose to treat. Chronology is often hazy, context is commonly narrow, and nuance absent. These shortcomings produce history that would earn a failing grade in an introductory course in modern European history.”

At the lunch, Jonathan Elukin of the History Department and Barry Kosmin of the Institute for the Study of Secularism in Society and Culture were enthusiastic in their introductory remarks. Public Policy and Law’s Ned Cabot summed up the reaction in the room when he said, “This is a book that, as soon as you start reading it, makes you wonder why it wasn’t written sooner.”

Is it overkill, or asking too much, to hold the New Atheists to the standards of professional historians? Neither Dawkins nor Harris claims to be such, and while Hitchens prided himself on his breadth of historical knowledge, he was a polemicist more devoted to the debating tactics of the Oxford Union than to the dispassionate understanding of the past.

Yet, as Painter demonstrates, there is a growing acceptance of the historical distortions of the New Atheists. What he himself has to offer is not a defense of religion against its contemporary despisers but a recognition of its complex role in contributing to the best as well as the worst that humans are capable of. He is particularly tough on the efforts of the New Atheists to paper over the hostility to religion of the totalitarian regimes that perpetrated the worst crimes of modern world.

Short and accessible, The New Atheist Denial of History would be an excellent book to assign in courses dealing with religion and irreligion in contemporary society. But sad to report, Palgrave MacMillan has priced the hardcover at $90, precluding that possibility until it sees fit to bring out a paperback edition.