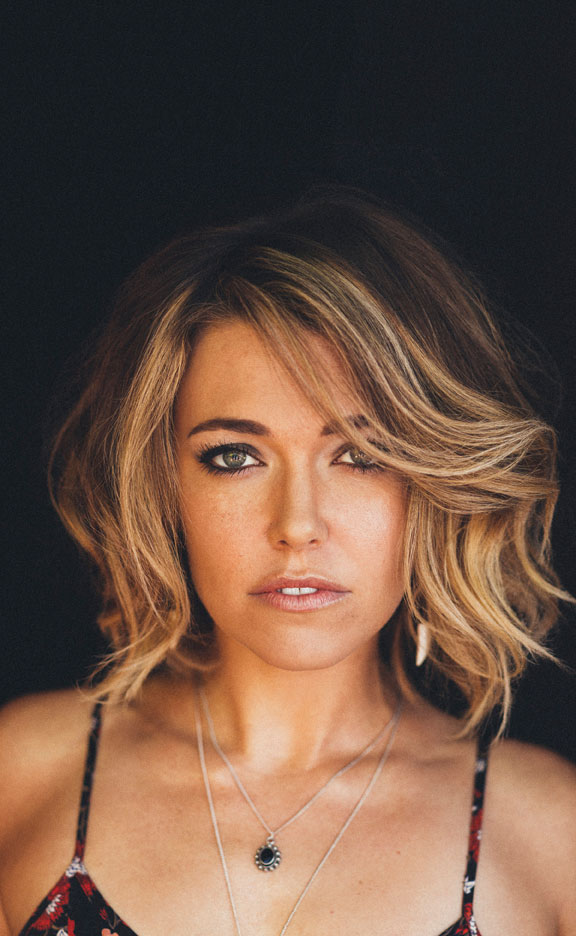 IT’S EVERYWHERE. You hear Rachel Platten’s “Fight Song” in the elevator or the grocery store. A Connecticut marketing firm used it in a video for Connecticut Children’s Medical Center; it’s in the trailer for the launch of the CBS TV show Supergirl, as well as the new Ford Edge commercial. In April, Platten sang it at the Radio Disney Music Awards. In May, she sang it on Good Morning America, simulcast on the Jumbotron in Times Square. In June, VH1 named her a You Oughta Know artist. Over the summer, the song hit Billboard’s overall top 10 and reached No. 1 on the iTunes all-genre single sales chart. It also hit No. 1 on adult pop radio and the top 10 of top 40 radio. And her “Fight Song” video had more than 30 million views.

Platten is seemingly an overnight sensation. It’s an “overnight,” however, that was 13 years in the making and traces its roots to Trinity College.

“I always loved music; I just didn’t think I was good enough,” explains Platten, who grew up in Newton, Massachusetts, playing the piano and singing. At Trinity, she was a four-year member of the Trinitones, eventually directing the a cappella group. And it was at Trinity that she felt the first glimmers of a solo career. Sophomore year, she sang with her friend’s band one Friday night at a fraternity party. “When I was finished, I thought, ‘Oh my God, that was the most fun thing I’ve ever done!’ ” she recalls.

A few months later, Platten, a political science major, was in class, listening to someone from the Office of Study Away talk about all the different opportunities. “He mentioned a new program in Trinidad. ‘Music is everything in Trinidad,’ he said. My first thought was, ‘I have to go there.’ ”

And she did, spending the spring of her junior year taking classes at The University of the West Indies and interning at a record label. There, she met Andre Tankard, a gifted songwriter, and took lessons from him. When she went home that summer, she enrolled in a songwriting course at Boston’s Berklee College of Music and ended up making a demo CD.

Back at Trinity as a senior, Platten met John Alcorn, principal lecturer in language and culture studies, who organized a program called Inside the Music. “I would search for up-and-coming bands and book them to come to Trinity on a night when they were in between shows in Boston and New York,” Alcorn said. Students who were part of the music scene on campus were invited to sound check and then to have dinner with the band.

“Rachel showed up at a sound check in fall 2002,” Alcorn recounts. Learning she had a demo, he asked for a copy. “When I heard it, I immediately knew this was true talent.” Alcorn helped Platten assemble a band of talented local musicians and book gigs at Hartford hot spots like Black-eyed Sally’s, Sully’s Pub, and the Webster Theater.

On the sidelines, Platten’s academic adviser, Brigitte Schulz, now a retired professor of political science, was a steadfast cheerleader. “I kept telling her, ‘Follow your heart, Rachel.’ I could see she really had something special,” Schulz recalls. Platten remembers panicking one day because she had an important show but also a paper due for Schulz’s class the next day. “Professor Schulz told me, ‘Of course you have to go and do your music, Rachel.’ ”

Though Schulz has no recollection of the event, the story doesn’t surprise her. “Don’t get me wrong. If I had a student who was messing around, I would turn into steel about deadlines. But I never thought my own classes should necessarily be the most important to students,” she says. “I wanted them to have open minds and treat all of life as a learning experience. Rachel was a brilliant student but also very passionate about her music.”

And Platten kept learning. In May 2003, Alcorn helped her record Trust in Me, her first full-length CD of original songs. “Rachel ended up selling out of the CDs at Commencement,” he says.

After making it in Hartford, Platten decided to move on to New York City. “I look back now and I think, ‘Who was that girl?’ ” she says. New York was a harsh wake-up call. “My singing wasn’t good enough. My piano playing wasn’t good enough,” she says. And her parents were scared, though at first, they supported her financially. Eventually, that came to an end. “I was broke, and my parents said to me, ‘We’re not going to help you anymore. If you’re going to make music your life, you need to figure this out.’ ” So Platten began playing covers every night from 1:00 to 4:00 a.m. in Greenwich Village. “Thank God I did that,” she reflects. “I can sing to any crowd now. I learned how to work a room and how to get a crowd of even the most seemingly uninterested people to pay attention.”

In 2011, Platten’s single “1,000 Ships” made it into the top 25 on the Billboard charts. “That got me on the map,” she recalls, but the glow didn’t last long. At the time, she was opening for Andy Grammer, whose hits include “Honey, I’m Good.” She liked Grammer’s agent, Ben Singer, and the way the two worked together. “So I called him and said, ‘I’d like to be part of your team.’ ‘Stop warming yourself on other people’s fires,’ he said to me. ‘Go build your own fire.’ ‘Wow,’ I remember thinking to myself. ‘Okay, it’s back to basics.’ And that’s songwriting.”

Platten locked herself in her apartment for three months and wrote. “When Ben saw that I was serious, he called and said, ‘I’m in. I want to work with you.’ That three months turned out to be the tip of the iceberg: Platten ended up spending two and a half years in full songwriting mode, composing 130 songs. “It took me 18 months to write ‘Fight Song,’ ” she explains. “I rewrote the bridges five times and reworked the verses seven times. It was torture. Amazing songs don’t have to be hard to write … they can come out very quickly and feel like gifts that you just get to channel. But ‘Fight Song’ for some reason was not one of them. It was laborious, and I had to go through the trenches for it.”

Thanks to “Fight Song,” Platten now has a large team, including a record label, publicist, agent, business manager, and others. She released an EP (extended play recording) of the same name in May and spent the summer on the road with Colbie Caillat and Christina Perri on the “The Girls Night Out, Boys Can Come Too” tour, with stops across the United States and Canada.

“Looking around, I feel really so incredibly proud of where I am,” Platten says. For years, she’s strived to be heard, and “Fight Song” has finally given her that chance. “I felt like I deserved to be on those big stages, to be told that my voice mattered and that my songs were valid. When that validation didn’t come, that pain led to ‘Fight Song.’ It led me to need to declare, no matter what, that I still believe in myself.

“I’m so proud that a song I wrote when I was at my lowest point is now helping people find light and hope as they go through theirs,” she said. “I don’t know what more I could ask for; I feel very very grateful.”