David Rosen, professor of English and chair of the English Department, along with co-author Aaron Santesso, recently received the James Russell Lowell Prize for their 2013 book, The Watchman in Pieces: Surveillance, Literature, and Liberal Personhood.

Rosen and Santesso, an associate professor in Georgia Tech’s School of Literature, Media, and Communication, met when each was doing a one-year stint at Wesleyan University. They realized that their areas of interest had some overlap and began collaborating on this book. 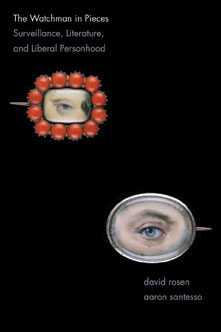 The Watchman in Pieces explores how ideas about personhood and surveillance have evolved together over the last 500 years. In this history, literature has played a major role, as both a record of, and laboratory for, changing beliefs. The authors’ primary claim is that the ideas about liberal personhood in literature make it possible for citizens to participate in an environment where they are being watched and responding to that surveillance.