When Heather Zusman ’16 worked at the Chuck Jones Center for Creativity in Costa Mesa, California, this summer, she may not have foreseen exactly how that would inspire her recent art project based on her study of Le Corbusier, a Swiss-French architect and designer. Nearly 20,000 “Magic Nuudles” later, Zusman has created seven chairs, which were on exhibit in October 2015 at The Mill, Trinity’s arts theme house. 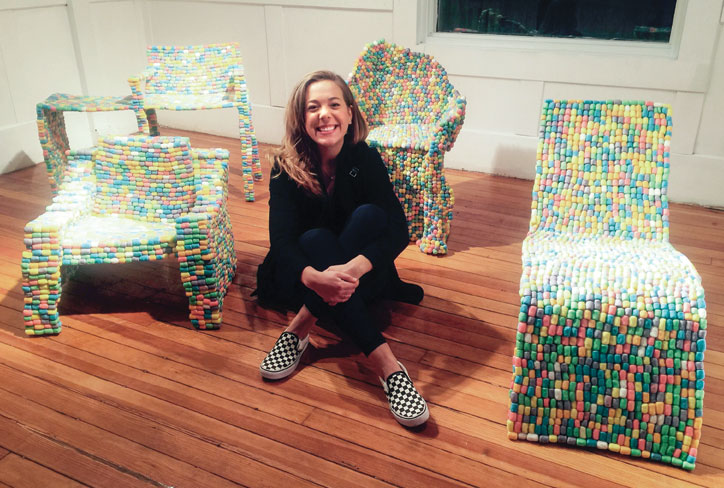 At the Chuck Jones Center, Zusman worked with patients with Parkinson’s disease to explore alternative healing practices. There, she heard a presentation by a surgeon from Hoag Hospital in Newport Beach, California, who stressed the benefits of arts and crafts in slowing the progression of Parkinson’s disease. Zusman worked extensively with patients on various art projects utilizing Magic Nuudles, which are safe and biodegradable crafting materials made of cornstarch and food coloring; collaging; and Japanese paper cutting.

Zusman says that while she is not following in the footsteps of her father, a physician, and adhering to traditional medical approaches to healing, she is fascinated by unconventional approaches; she created her Sitting with Nuudles art project in that spirit.

The quantity of Nuudles used to create the work is believed to be the largest number ever utilized for a single project, according to Kevin Sewart, CEO of Captain Creative Materials, which owns Magic Nuudles. Zusman used nearly 3,000 on one chair alone.

Zusman’s senior thesis project will focus on Le Corbusier’s interiors from Villa Savoye in Poissy, France; his apartment in Paris’s 16th arrondissement, Maison La Roche; as well as larger complexes such as the Unite d’habitation in Marseille, France. Zusman is majoring in art history and double minoring in architectural studies and studio art at Trinity. She plans to continue her studies and pursue a career in architecture upon graduating.