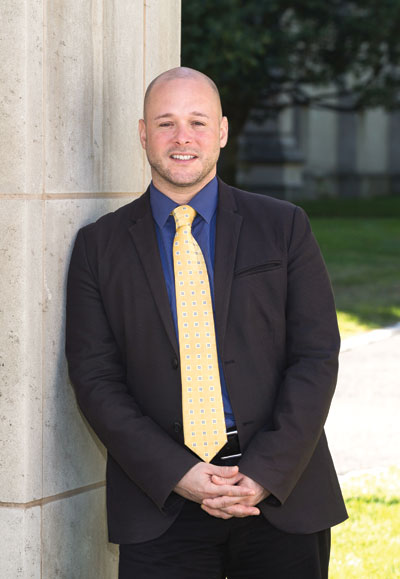 Trinity Vice President for Enrollment and Student Success Angel Pérez is shaking things up in the world of college admissions.

Pérez, who came to the College in June 2015, believes that characteristics such as persistence and optimism, coupled with high school GPA (grade point average), are better predictors of student success than standardized test scores and that sometimes the students who will thrive the most in college aren’t so obvious.

“Colleges need to explore new ways of defining what constitutes ‘the best and the brightest,’ ” Pérez says.

To that end, he was at the center of the College’s decision last fall to join the more than 800 colleges and universities that have made the submission of standardized test scores optional for undergraduate admission. “Research has proven that high school GPA is a stronger predictor of success in college than are standardized test scores,” he said in an October 5 letter announcing the decision. Many of Trinity’s top competitor schools already have made this move.

Trinity President Joanne Berger-Sweeney agrees: “There are many indicators of long-term success in college and life beyond standardized test scores.” By going test optional, she hopes to expand the diversity and further raise the quality of Trinity’s applicant pool.

This is exactly what happened at Pitzer College, a liberal arts institution near Los Angeles, where Pérez served as head of admissions for eight years before coming to Trinity. In addition to other changes, the school dropped its requirements for the SAT and ACT in 2004 and since then has seen significant increases in applications, student diversity, and GPAs.

But becoming test optional is not enough, says Pérez. Through questionnaires for guidance counselors, student essay questions, and interviewing techniques, he and his staff are going deeper and evaluating personality traits and characteristics — such as creativity and curiosity — that research shows predict student success. These attributes will not replace grades or other factors in the application, says Pérez. “They will provide depth to the applicant’s file and give the committee other tangibles to consider.”

Pérez, who holds a B.S. from Skidmore College, an M.A. in education from Columbia University, and a Ph.D. in international education from Claremont Graduate University, has made the study of these indicators his current academic focus. “My goal is to understand what research shows about traits and characteristics young people exhibit that are linked to success later in life,” he says. At Trinity, he is using this research to inform best practices in the admission process. 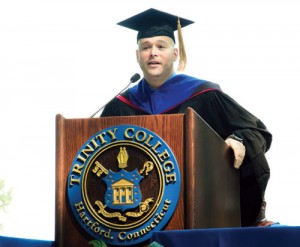 Caption: Pérez addresses the Class of 2019 at Convocation in September 2015. Photo: John Atashian

Pérez also has implemented additional methods of reaching qualified potential students. Trinity’s admissions counselors are visiting high schools in parts of the country — including areas in Texas, California, and Washington state — that had gone largely untapped by the College in the past. Many of these locations have high concentrations of college-bound students.

To learn which applicants truly want to become Bantams, technological tools are being utilized to help keep track of a student’s authentic and meaningful engagement with the College. A reinstated supplemental essay asks applicants to explain why they want to come to Trinity or what they hope to gain from the experience of studying in the urban setting of Hartford.

Pérez recognizes the importance of building strong relationships with high school guidance counselors, who are seen as the gateway to connecting with students. As part of an effort to build those bonds, the College has stepped up its visits with counselors and has produced two newsletters for the counselors and plans to publish more. Events for high school counselors in various locations around the country also are in the works.

Pérez also hopes to have Trinity represent the world even more than it does today. “When you have a student from Iowa, a student from California, and a student from Kenya, you are going to have much richer conversations, both in the classroom and outside of it.”

Mandi Haines, the former senior associate director of admissions who oversaw the recruitment of international students, was eager for Pérez to come to campus after his appointment was announced. “Angel has a strong reputation in the admissions world, and I knew he would take us in bold, new directions.”

Anthony Berry, director of admissions and a 16-year veteran of the office, says it’s Pérez’s infectious energy that keeps the team going during stressful times. “He is overwhelmingly positive and optimistic.”

These characteristics were what first impressed Berger-Sweeney. “I saw Angel’s energy, enthusiasm, and experience as excellent for Trinity,” she says. 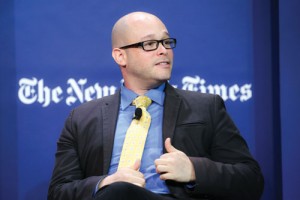 Pérez participates in a discussion at the Schools for Tomorrow conference hosted by The New York Times in September 2015. Photo: Neilson Barnard/Getty Images for the New York Times

For Pérez, that energy comes from the passion he has for “creating greater access to higher education” for all students. “The college admission deanship is ripe with opportunity to make a significant difference in the world,” he wrote in an essay titled “Becoming an Admissions Dean” (Inside Higher Ed, December 2013). The work is intense, with long hours and much travel. “I feel like I never stop,” he says. In his role at Trinity, he oversees admissions, financial aid, institutional research, career development, and retention.

But when the work feels overwhelming, Pérez thinks of his parents, who moved his family from Puerto Rico to the United States to seek better opportunities for their children. “They moved to this country without knowing English, with no money and no jobs. I know that even on my hardest day, I’m not working nearly as hard as they did to provide me with an opportunity to study in the U.S.”

At 17, Pérez wasn’t exactly an admission officer’s dream student. “By all traditional measures, I shouldn’t have made it through college,” he says. The price his family paid for the American dream was steep. They lived in the South Bronx during one of the most dangerous times in the borough’s history, says Pérez, who experienced crushing poverty and cruel violence and twice found himself in the back of a police cruiser. His high school was one of the poorest performing in New York City. By his own admission, his grades and SAT scores were not exemplary.

But a high school guidance counselor and a college admissions officer took an interest in him. “They saw things in me, like grit and an ability to overcome adversity,” he says. He enrolled at Skidmore through the Higher Educational Opportunity Program, a New York state program that provides financial and educational support to disadvantaged students. “It saved my life,” he says.

Pérez did well in college and landed his first job as an admissions counselor at Skidmore. Later he helped first-generation college students with the application process in New York City.

Today he is a fierce advocate for change within college admissions. He said he feels traditional admissions tools often exclude students — like himself — who can make significant contributions to campuses and to the world.

“My own story led me to challenge conventional thought,” says Pérez.

Read the blog post “Turning the Tide: What It Means for You” by Assistant Director of Admissions, Jim Sargent.