Trinity partners with Hartford.Health.Works. to strengthen STEM education and economic and workforce development in Hartford 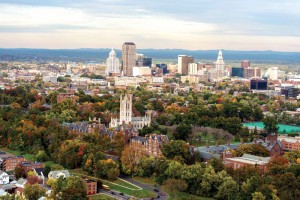 With the assistance of Trinity College faculty and staff, Hartford.Health.Works. (HHW) won first place in Hartford’s “Strong Cities, Strong Communities” (SC2) competition last May. This recognition also came with a $500,000 prize and the opportunity to make the vision — for Hartford to be a hub of entrepreneurialism and medical device manufacturing — become a reality.

Trinity is a lead educational partner and founding member of HHW, an exciting outgrowth of the Biomedical Engineering Alliance & Consortium (BEACON) spurred by the federal SC2 initiative. For the College, the partnership could not have been timelier. Trinity President Joanne Berger-Sweeney, who has made engagement with the community a cornerstone of her administration, has noted, “Trinity’s future is inextricably linked with Hartford’s future.” This serendipitous union will strengthen the College as well as the surrounding academic and medical institutions and has the potential to transform the city.

In 2011, President Barack Obama announced the SC2 initiative, an economic development challenge that granted select cities — including Hartford — funding and resources from the U.S. Economic Development Administration to seek creative and collaborative solutions to their toughest economic challenges. As a result, Hartford challenged its residents to create ideas that would make the state capital the city for entrepreneurs. HHW was the brainchild of BEACON and two of its members, Rising-Tide Health Care and MOVIA Robotics, and was created to leverage the region’s high density of biomedical engineering players into an economic development plan to expand educational opportunities, to attract new and existing businesses, and over the next decade, to create thousands of new jobs, thereby cutting Hartford’s unemployment rate in half and revitalizing the city. 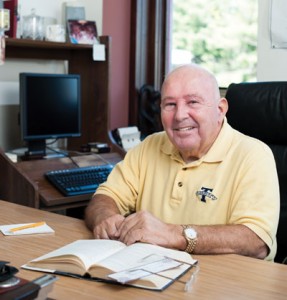 Joseph Bronzino, Vernon D. Roosa Professor of Applied Science, Emeritus, established BEACON in 1997 as a way to foster collaboration among area colleges and universities with biomedical programs. “I looked around the Hartford area and found that there were four biomedical engineering programs, but they were all small,” recalls Bronzino. “However, if you combined them, you had 30 or 40 faculty members and quite a number of students.” Originally an academic consortium, the organization quickly became the trade association for biomedical engineering manufacturers and suppliers in Connecticut. BEACON connects industry professionals with academic programs, and over the years, many Trinity students have used it to secure research internships that subsequently led to employment at member companies.

Mark Borton, BEACON entrepreneur-in-residence and executive director of HHW, says, “In its simplest terms, HHW is a comprehensive plan of programs and facilities that meet the specific unmet needs of students, entrepreneurs, and Hartford residents.” The holistic approach includes a campus for multi-institutional medical device research and development, testing, and manufacturing; pathways to connect industry partners and clinicians with academia; an incubator and accelerator for business development; mentoring for new businesses; and education and training programs for those seeking careers in the biomedical industry. While the overall focus is biomedical, related opportunities in software development, finance, communications and marketing, and other fields are inherent with the influx of new and expanded businesses in Hartford.

Berger-Sweeney saw immediately that HHW could play a pivotal role in the renaissance of Hartford. “Our involvement with Hartford.Health.Works. will, among many things, enable us to leverage Trinity’s jewel of an engineering program and deepen our ties to the health care industry. We are eager to be at the forefront of advancing Hartford’s future, and, along with our presence at 200 Constitution Plaza, this initiative provides excellent opportunities for Trinity to contribute to a thriving city.”

Adds Bronzino, “HHW will stimulate the development and commercialization of new medical devices for local, national, and international end users. And in that process, there will be opportunities for Trinity students to engage in research and development projects at research institutions, hospitals, and within the industry.” 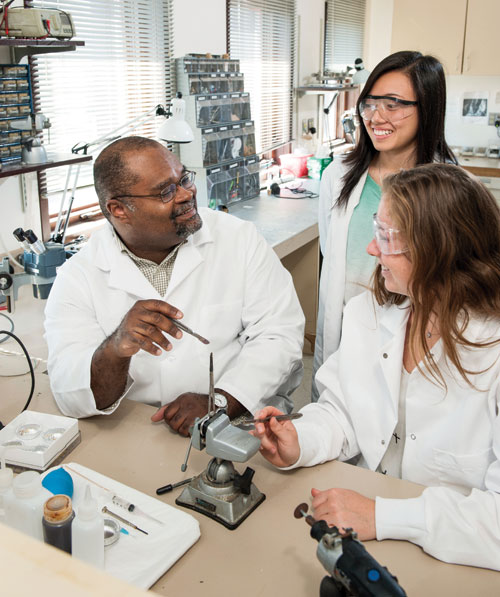 Harry Blaise, an associate professor of engineering at Trinity, said that HHW is yet another way that Trinity works with the local community to the mutual benefit of both. Faculty will team with industry partners, the University of Hartford, and Capital and Asnuntuck community colleges to develop middle and high school biomedical engineering curricula and educational units. With the help of undergraduate teaching interns, they will train teachers and engage students in a “BME-4-STEM” summer science academy. “Trinity has been a long-standing partner in the Hartford community,” says Blaise. “HHW is a natural fit for us and is certainly in line with Trinity’s urban and global emphasis. As HHW works to strengthen the city’s workforce through the establishment of a medical device manufacturing hub in Hartford, Trinity will play a key role in helping to educate this workforce.”

Trinity’s ABET (Accreditation Board for Engineering and Technology)-accredited Engineering Department already has a robust program in biomedical engineering. The College’s students will benefit from the new resources provided by HHW through expanded research opportunities and connections to corporations, including Medtronic, a leading health care products firm in Connecticut and an HHW founding member, for capstone projects and internships. Over the past five years, a number of Trinity undergraduates have performed research at Medtronic, and Bronzino envisions more such opportunities becoming available in the future, thanks to HHW. Says Blaise, “As medical device manufacturing expands in the city, there’s going to be an increased demand for a well-educated biomedical engineering workforce, and Trinity will be in a unique position to provide that education.”

Medical device manufacturing is one of the most in-demand industries in the country, according to Bronzino, so it makes sense for Trinity to position itself at the forefront of the field. “The first two decades of the 21st century have revolved around biomedical engineering and bioscience,” he says. “That’s the economic engine that drives the region and the country. That’s our industrial base in this country — we are a net exporter of medical devices to the world, and we want to keep it that way.”

Students around the country are getting the message, gravitating toward schools with strong bioengineering programs. According to U.S. Bureau of Labor Statistics, employment for biomedical engineers will grow by 62 percent between 2012 and 2022. “Biomedical engineering is an exciting field to get into right now,” says Blaise. “Its multidisciplinary approach to solving problems in medicine appeals to a lot of young students — they can be working with a physician one day and a physicist the next.”

Trinity College is actively working with HHW to seek additional partners within Hartford and from around the world. For more information, please contact Amy Brough, director of institutional support, at amy.brough@trincoll.edu.