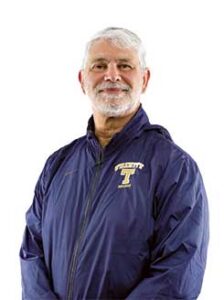 During his 27 seasons at Trinity, Assaiante guided the Bantams to 17 CSA national titles, including 13 consecutive crowns from 1999 to 2011, and 252 wins in a row, giving Trinity ownership of the longest-known winning streak in the history of intercollegiate varsity sports. Assaiante, the New England Small College Athletic Conference (NESCAC) Coach of the Year in 2008, 2009, and 2013, holds a 438–16 all-time record as the Bantam head coach, including 14 consecutive conference titles. Inducted into the U.S. Squash Hall of Fame in 2016, Assaiante twice was named the U.S. Olympic Committee Coach of the Year and was hailed in 2000 by The Hartford Courant as one of Connecticut’s top sports coaches of the 20th century. From 1999–2003 and again from 2010 to the present, Assaiante has coached the U.S. Squash Team and the USA Men’s Team. He also coached the Trinity men’s tennis squad for 19 seasons, notching a 188–97 career record with the Bantams.

Assaiante, Paul D. Assaiante Professor of Physical Education and associate director of the athletic endowment, was the recipient in 2002 of Trinity’s Arthur H. Hughes Award for Achievement in Teaching, which recognizes excellence in teaching by a junior member of the faculty. He also is the co-author of two books, including 2012’s Run to the Roar: Coaching to Overcome Fear.