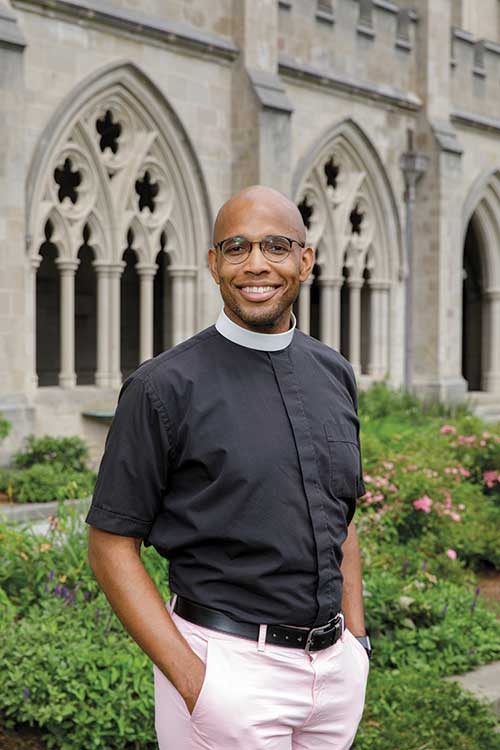 The Reverend Marcus G. Halley joined the Trinity College community in August as college chaplain and dean of spiritual and religious life. He provides the campus community with spiritual and pastoral care and counsel and leads a diverse team in Spiritual and Religious Life representing Buddhism, Judaism, Protestant Christianity, Roman Catholicism, Islam, and interfaith communities.

Halley comes to the college from the Episcopal Church in Connecticut, where he had served since 2019 as the dean of formation. In that role, he supported the formation of all baptized Episcopalians in Connecticut, as well as the formation of new clergy. He worked collaboratively with the Commission on Ministry to streamline and provide oversight for new and existing programs. He also served as the priest-in-charge for the Episcopal Church of the Holy Spirit, where he provided missional pastoral leadership for members of the congregation while working collaboratively with leaders within the parish to develop new models of leadership.

Halley previously served as missioner for evangelism for the Episcopal Church in Minneapolis, rector at Saint Paul’s Episcopal Church on Lake of the Isles in Minneapolis, and associate priest for young adults and families at Saint Andrew’s Episcopal Church in Kansas City, Missouri. He holds a master of divinity degree from the Interdenominational Theological Center and a master of sacred theology degree from the School of Theology at the University of the South, where he also is completing a doctor of ministry degree.

Trinity President Joanne Berger-Sweeney wrote in a June announcement to the community, “We, along with the search committee, were impressed by Marcus’s passion for lifelong learning and his ability to build and maintain strong collaborative relationships with diverse populations.” She added, “He will be a positive, compassionate, and energizing member of the Trinity community.”