By Maura King Scully
Photos courtesy of the Baltimore Orioles

Greg Bader ’97 bleeds orange and black. It’s not a medical condition; it’s just how hard-line Baltimore Orioles fans describe themselves. Yet even among superfans, Bader stands out for parlaying his love for his hometown team into a bona fide career. Currently senior vice president of administration and experience, Bader has spent more than 25 years with the Orioles organization.

Bader traces his passion for the Orioles to his tween years. “When I was 11 or 12, my father and I went to an open house at Memorial Stadium in Baltimore to pick out our seats for a 13-game season ticket plan,” he recounts. “That summer, I absolutely fell in love with the sport—the camaraderie, the common goal, the cheering crowd.” 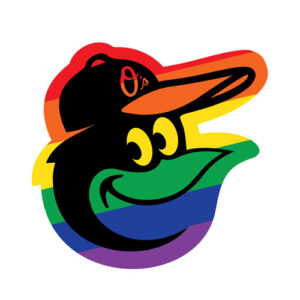 That summer also led Bader to form a larger life goal: to work for the Orioles when he grew up. “Friends of mine from high school kid me that I spent more time making Orioles’ lineups in my notebooks than I did writing down my French vocabulary or whatever else I was supposed to be studying,” he says. At the time, however, higher education didn’t offer many sports management programs. Bader decided his best bet was to get a well-rounded education where he could sharpen his writing and communication skills.

Trinity College felt like the perfect fit. “I went to a prep school in Maryland that was pretty small,” he explains. “So I knew that I wanted a similar college experience. Walking on the Trinity campus, it immediately struck me as what I pictured college would be like. It was a beautiful day, the leaves were turning, and the students looked so happy. I also really liked the liberal arts focus and the diverse courses you could take.”

One of those courses was “Law, Gender, and the Supreme Court” with Professor Adrienne Fulco, now associate professor of legal and policy studies and director of the Public Policy and Law Program. “It was a tremendous experience,” Bader says. “Professor Fulco is an amazing teacher. That course was 100 percent responsible for my decision to major in political science and become as interested as I am in politics and public policy.” Bader went on to take several more courses with Fulco, including “Feminist Legal Theory.”

Fulco remembers that well. “Typically there were more women students who enrolled in those courses,” she recalls. “It was wonderful to have Greg and his perspective in those classes. What most impressed me was his curiosity and ability to understand, analyze, and synthesize really complex ideas. He also had a phenomenal sense of humor. In addition, we shared a love for baseball—I’m a diehard Red Sox fan—so we immediately had something else in common.”

Fulco and Bader have stayed in touch over the years. “There are some people who are students of my heart,” Fulco continues. “Greg is in that category. We had not only academics and the wonderful professor-student mentor relationship that one hopes to have with students. But we also had baseball. And he certainly knew lots of things in that arena that I didn’t. So in a way, he was my mentor when it came to baseball.” Fulco notes that she has a gift from Bader displayed prominently in her office: a Baltimore Orioles cap. “Everybody sees it when they walk into my office. So Greg is always with me in spirit.”

Despite his love of politics and policy, Bader kept his goal of working for the Orioles top of mind. And as so often happens, preparation, hard work, and some good fortune led to opportunity. “After my freshman year, I got a summer internship with the Orioles in their PR department,” Bader says. “They brought me back for the next three summers; I also worked in the box office and the control room, putting up player statistics and crowd prompts on the scoreboard.” After graduating, Bader joined the organization full time, initially selling suites and then segueing to overseeing the team’s spring training operation. “It was an interesting several years where I had no idea where my career might take me and whether working in baseball was a long-term proposition.”

But in the back of Bader’s mind was a worrisome question: Could he have a career in the business of professional sports as a gay man? He was by no means closeted. Bader began coming out to his Trinity friends during his senior year and then to his family by the time he graduated. He has been with his husband, John, for 21 years. Still, coming out in the world of Major League Baseball (MLB) felt different—and as time went on, necessary. “I officially came out to my colleagues in 2007 when my husband and I accepted an invitation to a colleague’s wedding,” he says. “I was struck by how supportive everyone was.”

That supportive feeling culminated in 2018 when the Orioles hosted its first LGBTQ night at Camden Yards. “Up to that point, we had been very traditional in our promotions,” Bader explains. “That year, we started branching out. It was a natural fit to do a Pride Night to reinforce the message of Birdland, which is that all are welcome.” The Orioles also held a night for the National Federation of the Blind. “We became the first professional sports team in North America to wear Braille lettering on our jerseys. Those jerseys were later auctioned off to raise money for the Federation.”

According to Bader, these promotions are examples of the organization living its values. “I’m very proud of the work the Orioles do in terms of advancing our beliefs of what is good and right, whether it’s diversity and inclusion, the Black Lives Matter movement, or the right to vote,” he continues. “We’ve been very vocal about issues we believe transcend politics.”

Today, Bader is particularly glad that people who identify as LGBTQ don’t need to wonder if they are welcome in the MLB. “Being gay is not seen in any way, shape, or form as an impediment to being in baseball. I would argue that it actually will help you stand out from the crowd. And as organizations look to diversify in a variety of ways, the fact that you are LGBTQ could be seen very much as a positive,” he concludes. “It’s great to see that there’s been so much progress.”