When she was a child, Fay Stetz-Waters IDP’01 was often blamed for her twin sister’s antics—like the time her sister broke Stetz-Waters’s sunglasses by sitting on them. “Before I could say a word, she tattled to my mom, saying, ‘Look what sissy did!’ ” When Stetz-Waters professed her innocence, her mother ignored her. “My mom was pretty strict, and if she couldn’t identify who did it, it was usually me, the outspoken one, who got in trouble,” she says. “I spent a lot of time in punishment, alone in my room, thinking about fairness.”

These childhood experiences laid the foundation for Stetz-Waters’s sense of justice and foreshadowed her career as a lawyer and judge. Now, as director of civil rights for Oregon’s Department of Justice, she works on issues that impact the state’s most vulnerable citizens.

Her responsibilities include advising state agencies and defending state actions that involve the people’s rights, such as access to clean water and health care and the ability to earn money. “If there is an equity piece missing from any legislation, I’ll work with the [state’s] attorney general to get that added in if I can,” she says.

Outreach is important to Stetz-Waters, and she creates opportunities for people in her state to speak up and be heard. Last summer, she facilitated Oregon’s Community Conversations, a series of roundtable discussions that give people affected by inequity opportunities to share their experiences of hate and discrimination. The program has led to substantive governmental changes, including increased culturally specific resources for crime victims. She also manages a Bias Response Hotline for Oregonians to report bias incidents and crimes, the first in the country to focus on the needs of the people, she says.

Stetz-Waters also advocates for change on a national level and coordinated Oregon’s response to a multistate lawsuit that challenges changes to the U.S. Department of Labor’s joint-employer rule. The rule, part of the Fair Labor Standards Act, defines who or what is considered an employer. Until January 2020, the rule stated that an employer must be held accountable to its workers for minimum wage, overtime, and child labor protection, whether the workers are engaged directly by the corporation or through an intermediary. But last year, the Labor Department made changes to the law that would leave workers vulnerable. In September 2020, 18 states, including Oregon, sued to stop implementation of the rule.

Though she has achieved a high-level of success, Stetz-Waters’s journey was not easy. She grew up in Baltimore in the 1980s, amid rampant violence. Her mother suffered from an undiagnosed mental illness, and her father died during her senior year of high school.

With her mother “checked out” and her father sick, she enrolled herself in Western High School, one of the country’s oldest public all-girls’ secondary schools. “It was a place where academics were taken seriously, where I could see what a college trajectory looked like,” she says.

After graduation, with no money for college, she joined the Marine Corps and pursued her education at her own pace. “I have never bought into the idea of late starts. People are on their own trajectory,” she says.

After four years, she decided not to reenlist. “This was before ‘don’t ask, don’t tell,’ and I was in a relationship with a woman,” she says. When her partner moved to Connecticut, Stetz-Waters went, too, and began working as a 911 dispatcher for the Manchester Police Department.

She also studied at Manchester Community College. “I was enjoying education as an exercise, taking a bunch of classes,” she says. Her intellectual curiosity and high GPA caught the attention of an administrator, who suggested she try for a scholarship to a four-year school.

Stetz-Waters says she chose Trinity because of its excellent reputation. And as a self-supporting student in the Individualized Degree Program, the college’s location near her employer was a plus. She worked nights at the police department and took a full course load during the day, majoring in history. “I would finish my shift, drive to Trinity, and sleep in my car for an hour before classes started. Then I would go home, sleep for a couple of hours, and go to work.” She did this for two years before graduating with honors. 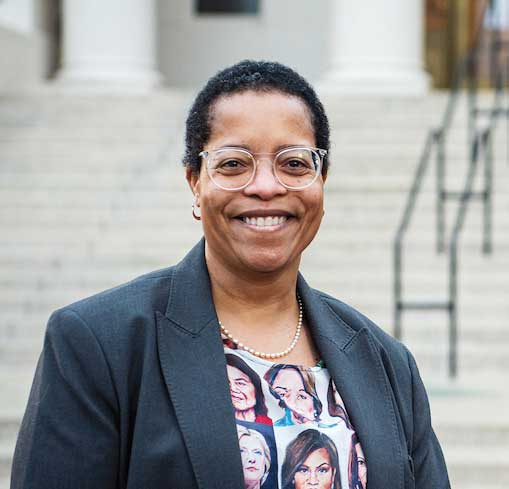 Along the way, she says, she benefited from Trinity’s talented and encouraging faculty. She credits her adviser, Barbara Sicherman, William R. Kenan Jr. Professor of American Institutions and Values, Emerita, with teaching her how to dig deeper in her research and analysis of materials. During her senior year, she served as a teaching assistant for former history faculty member Jeff Roche’s class on the 1960s, which strengthened her interest in civil rights.

One of her favorite courses was “Protest in Music,” taught by Professor of Music Gail Woldu. “It’s where I first heard Debussy and Ravel, and it gave me an appreciation for rap and hip hop that I didn’t have,” says Stetz-Waters.

Though they’ve had no contact in 20 years, Woldu remembers Stetz-Waters for her keen insight during a class discussion. After listening to a recording of Ma Rainey’s “Prove It on Me Blues”—with the refrain, “Went out last night with a crowd of my friends. They must have been women, ’cause I don’t like no men”—Stetz-Waters made an observation that even Woldu hadn’t considered.

“We had been arguing about the boldness of such a line and the boldness of a record company … to market a song about lesbianism,” says Woldu. Stetz-Waters suggested that the record company was bold because they knew it had an audience of lesbian listeners who understood. “She helped us see a potential market for music outside the mainstream,” says Woldu. “I use her comment every time I teach that piece.”

After Trinity, Stetz-Waters earned a J.D. in 2005 from Lewis & Clark Law School in Portland, where she wrote about marriage equality, transgender rights, and crime victims’ rights. Her first job out of law school was for Legal Aid of Oregon, where she provided representation for underserved residents of Linn and Benton Counties. “She has a heart for the most vulnerable people,” says Mitzi Naucler, who was her supervisor at Legal Aid. The two remain close, and Naucler has enjoyed watching the growth of her friend’s career.

Over the years, Stetz-Waters has served as an administrative law judge for the Oregon Employment Department, a hearings officer for the state’s Board of Parole, and a circuit court judge in Linn County. She began working at the Oregon Department of Justice in 2019, and Naucler says it is a position for which Stetz-Waters is particularly suited. “She’s not a pushover, but she isn’t unpleasant to anyone,” says Naucler. She says she feels that Stetz-Waters’s civility in the face of conflict is particularly necessary right now, with the country so divided.

Stetz-Waters’s wife of 22 years, writer Karelia Stetz-Waters, agrees. “Though she is very passionate about civil rights, she is very rational when others get polarized. She always sees both sides and strives for the middle ground,” she says.

Stetz-Waters’s work in law enforcement has informed her position on one particularly polarizing issue: police reform. As a 911 dispatcher, she saw what police officers experience. “There are mental-health risks that occur [when officers] repeatedly respond to people in crisis, take lives, and see death. It can make you see the worst in people, rob you of your compassion, and leave you viewing people as threats instead of humans,” she says.

Instead of defunding police, she advocates for rewarding officers who establish a rapport with those in their community and providing anti-bias and equity training to all, not just a select few.

“Her integrity, her ethical compass, and her passion for justice paired with her incredible work ethic really is changing our state for the better,” says Karelia Stetz-Waters. “I hope more people follow in her footsteps.”