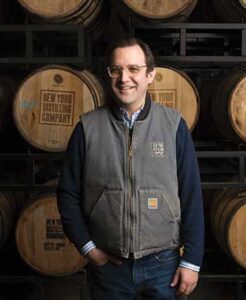 FAVORITE TRINITY MEMORY: Singing with the Trinity Pipes. The Pipes had just celebrated their 50th anniversary the year before I arrived at Trinity, and, for me, it created a generational connectivity to the group and the college. To this day, I am in touch not only with classmates I had the privilege to sing with but also with Pipes from long before and after I graduated. It was a chance to grow with a tight group of friends who all loved music and respected one another’s talents.

How did New York Distilling come about? I always wanted to live in New York and moved downtown two weeks after graduation. I fell in love with hospitality and made a name for myself as an authority on drinks and cocktail history as the city and most of the country entered what’s been called the Second Golden Age of Cocktails in the late ’90s. The distillery, based in Brooklyn, became a natural extension and fueled my interest to start my own business focusing on American rye whiskey and gin.

Why did you decide on that focus? These are the classic spirits of America’s historic cocktail culture. During the last 45 years, our national gastronomy has been an ongoing evolution—from the opening of Chez Panisse in 1971 promoting the farm-to-table movement to the rise of wine and then craft beer, the last remaining category was distilled spirits and cocktails. The great revelation is that cocktails, as much as barbecue of the South, are authentic American gastronomy. It is a style and study that has reemerged around the country as we reclaim our taste buds and has been exported around the world during the last 20 years. If you look at the cocktails and cocktail ephemera of the late 19th century (up to Prohibition), they tend to feature rye whiskey and gin. My aim is to put a personal, original touch on these classic spirits and to make them as relevant today as they were in the First Golden Age of Cocktails.

What do you enjoy most about your work? The distillery is a great creative outlet for me. I get to make fun products to my specifications and share them with the public through a distinct and historic cultural lens—cocktails.

How has the COVID-19 pandemic affected your business? It is a calamitous moment for the entire hospitality industry. Prior to COVID-19, our business was largely predicated on nearly three decades’ worth of relationships with bars, restaurants, and hotels. They are closed, many permanently. Fortunately, we are in a reasonable position to retool our sales focus to retail and new direct-to-consumer avenues that have been very promising. When you make (and age) whiskey, you are imbued with a strong sense of patience. It will, I hope, serve me well as we overhaul our business plans to come out stronger on the other side of this challenge.

How did your time at Trinity prepare you for what you do now? The great range of classes and experiences created a path of purposeful difference for me. The nature of my personal Trinity education ingrained me with a desire to suck as much detail as possible out of one topic at a time. These traits serve me every day in my business as well as in how my wife and I raise our two girls, especially through current remote schooling.

What was the most memorable course you took at Trinity? “The Birth of Modernism,” a class I took as part of my music major, was the epitome of a liberal arts education. Its primary focus helped me develop a passion for early 20th-century music. The surrounding influences of history, politics, art, and social science were made relevant to every piece of music we studied and transported me to late 19th-century Russia, early 20th-century Paris, Austria, Switzerland, and Germany. It was a glorious semester.

What career (or life) advice would you give to current Trinity students? 1) Follow your passions. 2) Make sure you leave room for art, music, and cultural pursuits. 3) Be confident in asking others for help and advice. 4) Be ready to help others whenever you can.