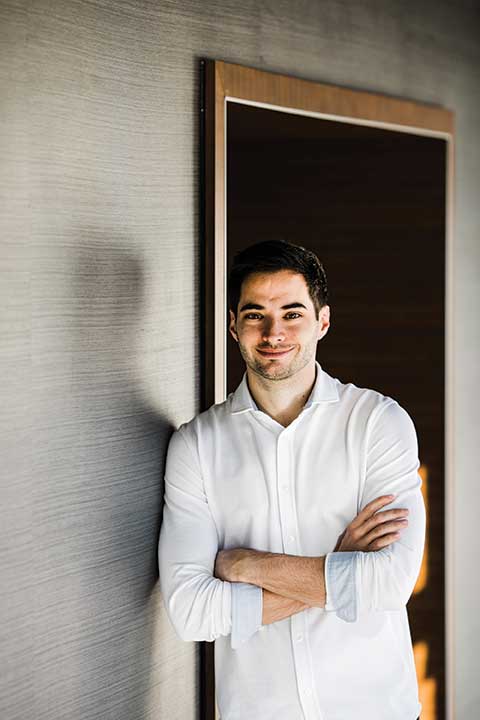 FAVORITE TRINITY MEMORY: My senior week. My friend group realized that we’d never really get the chance to all be together like that again, so we made bucket lists and sucked every hour of fun out of each day.

What do you do in your roles at ESG Law and Theorycraft? I’m an esports attorney and consultant. On the legal side, my work is a mix between sports/entertainment and general business law. We handle general corporate, employment, and other typical business matters, but we’re also drafting player contracts, trades, and sponsorships and negotiating the formation documents for the inaugural franchised esports leagues.

On the consulting side, my clients are typically mainstream sports, media, and entertainment companies that are looking to translate whatever they do to the esports and gaming space. I’ve advised major brands, sports teams and their ownership groups, investors, media companies, and other businesses on how to successfully enter and navigate the esports ecosystem.

What do you think is behind the popularity of esports? People like watching other people play video games for the same reason people like watching other people play sports: it’s aspirational, entertaining escapism. Juxtapose that against the incredible growth of the gaming industry, which is already generating more than $150 billion worldwide, and it’s not hard to see why esports are becoming more and more popular. With that said, we’re still in the bottom half of the first inning in terms of our growth and development. The most popular esport—League of Legends—is already generating global viewership akin to major traditional sports in the United States; fast forward 30 years, when the majority of the global population will have grown up in a world where video games are ubiquitous, and the most popular sports in the world are going to be soccer and a video game (that likely hasn’t been created yet).

How has the pandemic affected esports? Like any entertainment-based business, the esports industry took an immediate hit and had to adjust a wide array of plans surrounding major live events throughout 2020. With that said, we’re lucky in that the majority of our events easily could move online. While most other forms of entertainment took extended breaks or outright canceled, our show was able to go on. Combine that with the fact that people were stuck at home with limited entertainment options, and it created a perfect storm to expose new audiences to esports and gaming content; many games saw explosive viewership growth as a result.

What do you enjoy most about your work? The esports industry is still incredibly young, but it’s growing so fast that we’re being forced to build the airplane while it’s in the air. That means we get to innovate, test, learn, and push the bounds on what the competitive landscape for a sport looks like. It’s an incredibly challenging and fun puzzle to wake up every day and try to help solve.

What are the biggest challenges you face? The esports industry is a little overhyped at the moment. People see images of sold-out stadiums but don’t realize that we’re not selling out big venues for regular-season matches just yet. They see the staggering viewership numbers, but they don’t parse through the data to realize that large percentages of that viewership tend to be in Asia. These expectations have caused some people to get burned, whether it’s a brand that doesn’t see the ROI it expected from its sponsorship or an investor who is surprised revenues aren’t growing as quickly as she thought it would. Don’t get me wrong, I’m still a huge believer in the esports industry long-term—I bet my career on it. But we’re shooting ourselves in the foot at times, and that’s making it harder to build the industry in a manner that is sustainable.

What was the most memorable course you took at Trinity? “Bill of Rights” with Professor Ned Cabot. He taught us how to think at a level far beyond anything I’d ever experienced by challenging every position, every assumption; you could actually feel the students’ capabilities evolving week over week. His style sparked so many good debates that the class didn’t even feel like a class.

Was there a professor at Trinity who was particularly influential? Professor Renny Fulco, hands down. I took basically every Fulco class I could in my time at Trinity and learned more from her than I could possibly recount. But her biggest impact on my life wasn’t in the classroom; she spent so much additional time guiding me in thinking through graduate school and my future career path. When I was leaning toward taking on massive amounts of debt to attend a top 5 law school, she encouraged me to consider the flexibility that would come from taking a scholarship and graduating functionally debt free. Without that guidance, I never would’ve been able to take the risk I did to pursue my career in the esports industry. I am eternally grateful.