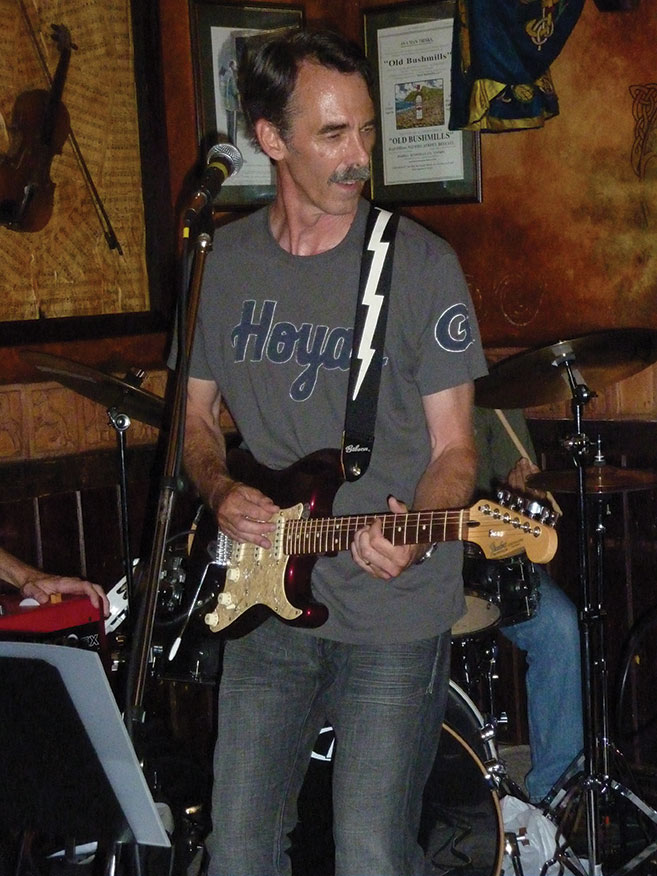 FAVORITE TRINITY MEMORY: Too many Thursday Night Clubs at the Hall may have blurred my memory, but I loved spring fever on the quad as winter let go, playing guitar with the Hall band, Easy Tea (a folk-rock band composed of Trinity students), and a project with Ken, Zan, and Stu (did we have a name for that band?).

What has been your career path? The day after graduation, I threw my guitars and my long-haired, lanky self into a Toyota pickup and headed home. A few weeks later, I was standing at attention on hot asphalt at the U.S. Navy’s Aviation Officer Candidate School in Pensacola, Florida, sporting a buzz cut and a baggy, green uniform with a helmet and being yelled at by a Marine gunnery sergeant. I was commissioned as an intelligence officer that September and spent the next six years serving with an aircraft-carrier-based squadron in Norfolk and the Defense Intelligence Agency in D.C. I left the Navy to pursue an M.B.A. and then joined General Motors in Detroit. I started as an analyst in marketing and product planning and ended up as an executive in research and development (R & D) with leadership roles in strategy, intelligence, alliance management, and innovation. When I started, I thought I might last five years, but I stayed for 28. Every time I considered leaving, something interesting popped up, such as a four-year assignment in Switzerland, running the pre-bankruptcy program office, and being a founding member of GM’s first corporate venture capital unit. I still wonder how a right-brained history major with an M.B.A. spent 15 years in industrial R & D. I left GM in 2014 to start an innovation consulting practice, which led to gigs all over the country and the chance to work with innovation accelerators including the National Science Foundation’s Innovation Corps and Techstars. I joined the Michigan SBDC in 2018. In hindsight, my career “path” was more like bushwhacked serendipity that led to a service sandwich with military and economic development as the bread and thick slices of private sector ham and cheese in the middle.

What do you do with the Michigan Small Business Development Center? I work with an entrepreneurial support network to help early-stage mobility tech start-ups gain traction. Mobility means anything that moves people or goods on land, sea, or air, as well as the physical and data infrastructure that enables that movement. It’s a big space. I concentrate on business-model building and stress testing, and I work with a team of experts who help with grant applications, fundraising, financial modeling, intellectual property, and marketing strategy. We help founders apply innovation best practices to accelerate success and avoid pitfalls.

Why do you feel this work is important? Start-up work is hard and messy. Most fail. Helping new entrepreneurs avoid wasting time and money can have a significant impact on the start-up and the community. Unlike the corporate world, start-ups need to move fast, so we often see the results of our efforts quickly and clearly. And it is a lot of fun working with creative entrepreneurs who are putting their hearts and souls into ideas that could be big.

How did your time at Trinity prepare you for what you do? The Trinity curriculum was flexible and allowed for exploring peripheral as well as core subjects. I think this helped with critical thinking, learning how to assess incomplete and distorted information and how to be a better communicator. This foundation paid off in spades for my work in the Navy, at GM, and with start-ups today.

What was the most memorable course you took at Trinity? The History Department offered an intensive program with seminars and a senior thesis. I signed up for this and tackled a convoluted thesis that tried to link 19th-century industrial, economic, and aesthetic trends using the transition from wooden sailing ships to steam-powered steel ships as a case study. In some ways, this presaged what I’ve done in the auto sector as it transitions to electric, autonomous, and connected mobility-as-a-service models.

Did you have a professor who was particularly influential? I made the mistake of seeing my professors as instructors rather than mentors, so I didn’t get too close to any of them. That being said, I enjoyed Jay West’s Russian history courses, George Cooper’s colorful lectures, and Edward Sloan’s patience as my thesis adviser.