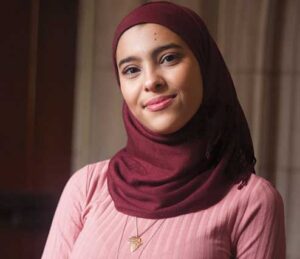 Khaoula Ben Haj Frej ’18 is an enthusiastic alumni interviewer for the Admissions Volunteer Program. Since starting in summer 2020, she has interviewed more than a dozen students, sharing her love of, and answering their questions about, the college.

“I was very, very involved on campus,” she explains, in perhaps more than a bit of understatement. A neuroscience major with minors in English and biology, Ben Haj Frej worked as both a neuroscience and biology research assistant. She was a resident assistant and an active volunteer with the Office of Multicultural Affairs. And that’s not all. At different times during her Trinity career, she worked at the Underground Coffeehouse, in the office overseeing residential life, and at the front desk in the Raether Library and Information Technology Center.

“I go after opportunities I enjoy,” explains Ben Haj Frej, who is a clinical research coordinator at the Center for Cancer Therapeutic Innovation at Dana-Farber Cancer Institute in Boston. As far as admissions interviewing goes, “I’m a recent grad, which I think translates well to prospective students. I get to talk to people from all over the world and be a positive face for the college. It’s also a way for me to give back to Trinity.”

Ben Haj Frej considers the latter to be an imperative. “All of the opportunities I’ve had are because of Trinity,” she says. “I try to pass that on.” For example, after taking part in a Multicultural Affairs panel, “Hijabs and Hoodies,” Ben Haj Frej began communicating on Instagram with a graduate who works at the United Nations. That led to her involvement in a 2019 conference, “Women’s Resistance to State and Secular Violence: Indigenous and Muslim Perspectives.” She now volunteers as a grant writer with the U.N. in Uganda.

“Trinity was the reason I got my first job at Dana-Farber [as a research technician] and my second job,” she continues. “I connected with alumni on LinkedIn who worked at Dana-Farber. They read over my cover letter and forwarded my résumé.”

“Doing admissions interviewing is different from anything else I do,” she says. “It’s new, fun, and exciting—and I get to share my love of Trinity with prospective students. I still remember doing my alumni interview with Trinity when I was applying.”

Senior Associate Director of Admission Courtney Roach ’16, who chairs the admissions volunteer program, appreciates the energy Ben Haj Frej brings to volunteering. “When I send out a communication, I know Khaoula will be one of the first to respond,” Roach says. “I love to see that enthusiasm.”

Ben Haj Frej looks forward to keeping up her involvement with the Admissions Volunteer Program even with some upcoming life changes: she will be starting medical school in fall 2021. “I’ve already been accepted into a number of schools and will be making my decision this spring about where to attend,” she concludes, adding, given the sum total of her experiences at the college, “Trinity was the reason I got into medical school, too.”