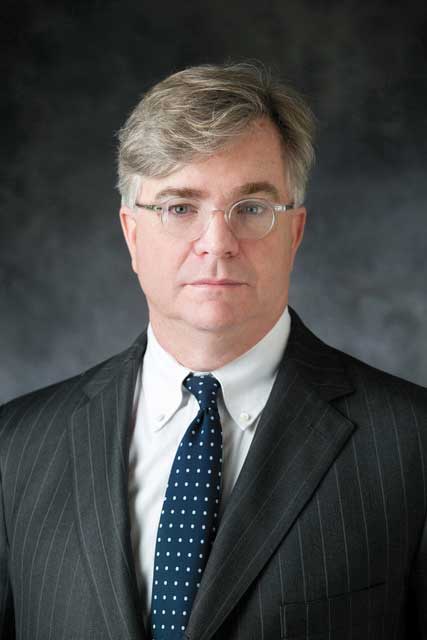 A successful lawyer, entrepreneur, and mediator, Thomas D. Casey ’80 says his four years at Trinity College helped set the foundation for his life.

“Institutions like Trinity will continue only if those who benefit from them give back,” he says. “The college affected me in a very positive way, so it’s important to me to give of my time and resources so future generations can have the same experiences.”

An American studies major and lifelong history buff, Casey particularly enjoyed classes with Professor of History and American Studies Eugene Leach, Professor of Humanities Harold Martin, and Professor of English Paul Smith. “None of those men told me what or how to think,” he says. “They showed me how to learn.”

After graduation, Casey worked for the Reagan-Bush presidential campaign and was part of the transition team for the U.S. Department of Housing and Urban Development (HUD). From 1981–82, he was a special assistant to the secretary of HUD before enrolling at Georgetown University Law Center. After receiving a J.D. in 1985, he returned to HUD in a series of positions, including deputy assistant secretary for legislation, chief of staff to the secretary, and acting assistant secretary for fair housing and equal opportunity.

During the 1990s, in what he calls his “hippie carpenter” phase, he took a break from government to work for himself doing finish carpentry, renovation, and repair. But in 1999, he returned to Capitol Hill to conduct oversight and investigations for the House of Representatives’ Committee on Resources. In 2001, he became chief counsel to the chairman of the Federal Housing Finance Board (now the Federal Housing Finance Agency).

In 2007, Casey co-founded the firm now known as MAXEX, described on its website as “the first multi-seller, multi-buyer residential loan exchange.” Since 2014, he has been an attorney in private practice, specializing in mediation.

Despite his busy professional life, Casey consistently has made his alma mater a priority. “He’s always there for Trinity,” says friend Charles Ingersoll ’83. Though the two met in college, their friendship grew after graduation when they were both working in D.C.

Casey has been active in the Trinity Club of Washington, D.C., since graduation and served as its president three times. “He’s very good at planning programs that are interesting and fun,” says Ingersoll, “like a picnic at the Potomac Boat Club or tours of local museums.”

Casey is on his third term on the Trinity Alumni Association Executive Committee and serves as president of his class. Although he says he’s not wild about asking classmates for money, he’s also “pinch-hitting” as a class agent.

For many years, he was secretary for his class, which he particularly enjoyed. “He was just superb in this position,” says classmate and friend Steven Stuart ’80. “He reached out to everyone, not just his close friends, and created interesting [columns for The Trinity Reporter] that included stories from many different alumni.”

Of all of his service to Trinity, Casey is particularly proud to have helped orchestrate a letter-writing campaign to members of the Class of 2020. “It was the least we could do when they missed out on their graduation [due to the pandemic].” Casey, along with David Clark ’80, gathered volunteers to write personal notes of congratulations and support to all 504 members of the Class of 2020. Of the 88 alumni who participated in the letter-writing campaign, 36 were from the Class of 1980, more than from any other class. Many of the volunteers received letters back from their students, including Casey.

“It is nice to know the letters meant something to the Class of 2020. My class certainly enjoyed writing to them,” he says.