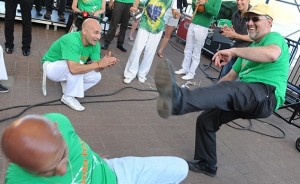 Eric Galm is Associate Professor of music and chair of the music department at Trinity College in Hartford Connecticut, where he founded the Trinity Samba Ensemble, which has performed throughout Connecticut and at the Intercollegiate Festival of African Music and Arts at Tufts University in Boston. As a percussionist, he has performed with American icon Pete Seeger and Jim Scott (formerly of the Paul Winter Consort), and he has recorded several CDs ranging from Renaissance music to Brazilian Jazz.  Through his work at Trinity, he developed the Trinity Samba Fest, where he is the Festival Director and Music Director of the annual Samba Fest, a Hartford-based springtime family-oriented world music festival held at the city’s downtown Riverfront.  In addition to featuring several artists throughout the region, the Samba Fest has hosted the United States debut performances of Brazilian musical ensembles Berimbrown (Minas Gerais) and Dinho Nascimento and the Orquestra de Berimbaus do Morro do Querosene (São Paulo). He has received a Fulbright fellowship for research in Brazil, as well as awards in teaching excellence at Trinity College (The Dean Hughes Award for Achievement in Teaching) and the Community Music Center of Boston (The Marilla McDill Prize for Teaching Excellence).  His publications include The Berimbau: Soul of Brazilian Music (2010 U. Press of Mississippi), “Tension and Tradition: Exploration of the Brazilian Berimbau by Naná Vasconcelos, Dinho Nascimento and Ramiro Musotto” (2011 Luso Brazilian Review), “Baianas, Malandros and Samba: Listening to Brazil Through Donald Duck’s Ears,” in Global Soundtracks (2008 Wesleyan U Press), and “Percussion Instruments of Brazil” in The Encyclopedia of Percussion (2007 Routledge).  He holds degrees from Wesleyan (Ph.D.) and Tufts (M.A.) universities (ethnomusicology/world music), the University of Michigan (B.M. Percussion), and performance certificates from the Escola Brasileira de Música and the Universidade Federal do Rio de Janeiro in Brazil.

The Center for Urban and Global Studies Arts Initative, Music Department, and Office of Community Relations at Trinity College 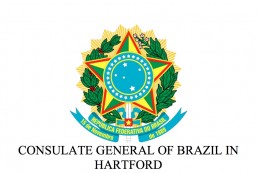 Consulate General of Brazil in Hartford