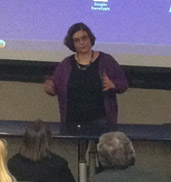 Since 2002 director of new excavations at Lefkandi in Euboia, Dr. Irene Lemos is professor of classical archaeology at Merton College, Oxford University. On Monday, January 27, 2014, she stopped by Trinity College to give a lecture for the Hartford Society of the Archaeological Institute of America (AIA).

Lefkandi was originally excavated in the 1960s by a British team that made some amazing and unexpected discoveries, including a massive building and horse burials. The new excavations, summarized in Lemos’s talk, have brought more surprises that overturn views of the Greek “Dark Age” as an impoverished and depopulated world. Exploring the area of the settlement rather than cemeteries, she has found large, well-appointed houses, expensive imports, and plentiful evidence of a thriving agricultural economy. Her lecture reminds us that there remains much to learn about the Greek past — and students and community members here at Trinity are now up-to-date on discoveries that even professional archaeologists haven’t yet heard about!

Check out the Trinity College Classics Department website for a schedule of upcoming AIA talks. They are always open to the public and always free.