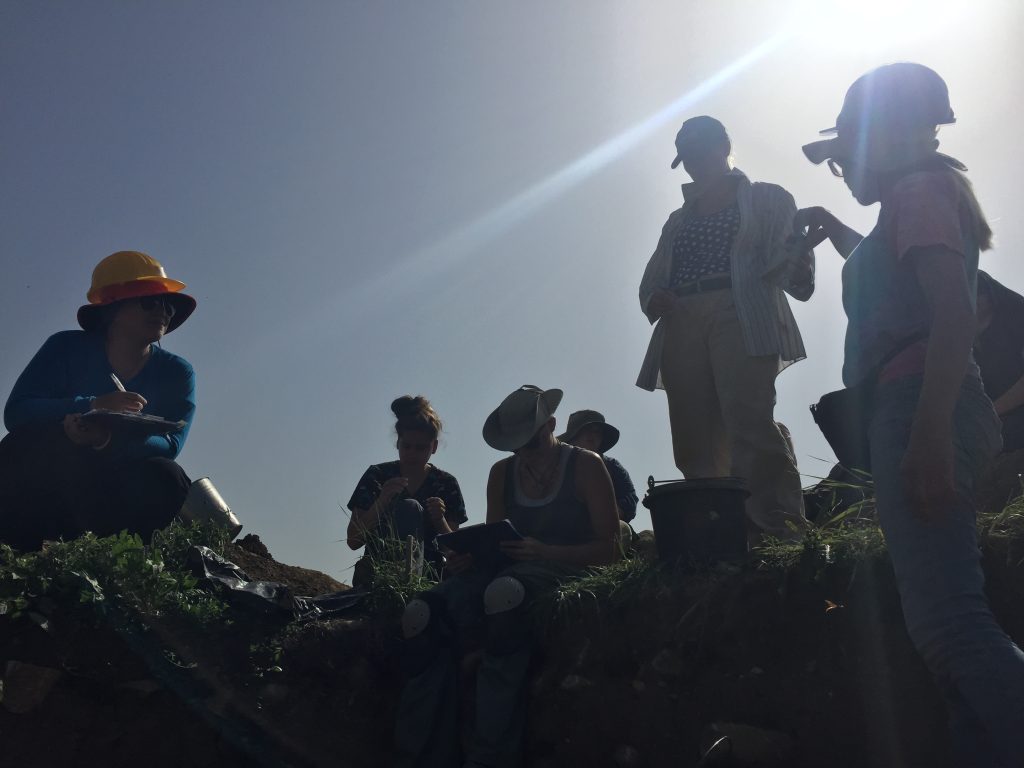 Excavators Clustered Around the Dig

Transylvania Diaries: Week 2- Is this a bone?

Top Five Things That Look Like Bones But Are Not:

Being a novice to burial excavation, approximately 90% of the questions I ask are along the lines of “Is this a bone? If yes, what is it?” And most of the time, it is not a bone. A quick and dirty field method for distinguishing between rocks and bones is to lick the object in question. Bones stick to your tongue because they’re porous. I may or may not have licked a lot of rocks already.

We started the week with a lesson in soil tests. Soil tests, to a non-geologist, are really just glorified playing in the dirt. They involve testing the texture of the soil matrix by rubbing it against your palm, and water retention by rolling a teaspoon of dirt into a ball. Because I am a mature adult, I totally did not make pet rocks out of the clay matrix when I was done with my practice or formal soil tests.

Eleanor and I finished up excavating our neonate burial on Monday. However, with Zsolt split between two dig sites, we were not able to finish our burial with mapping and taking elevations until Wednesday. Mapping at a 1:10 scale for a burial that is only 46 cm total is no easy task, especially when the distance between points was less than the thickness of our pencil lead. Eleanor is a drawing champ, however, so we were able to produce a representative map of our burial. We finished up by taking elevations relative to our site datum point and measuring the location of the burial relative to the corners of the trench. We were able to pull the neonate on the same day we mapped. It was really a relief to finally get it out of the ground, especially since we’ve been having some rain in the evenings. The bones now rest, safe and sound, at the lab for processing. 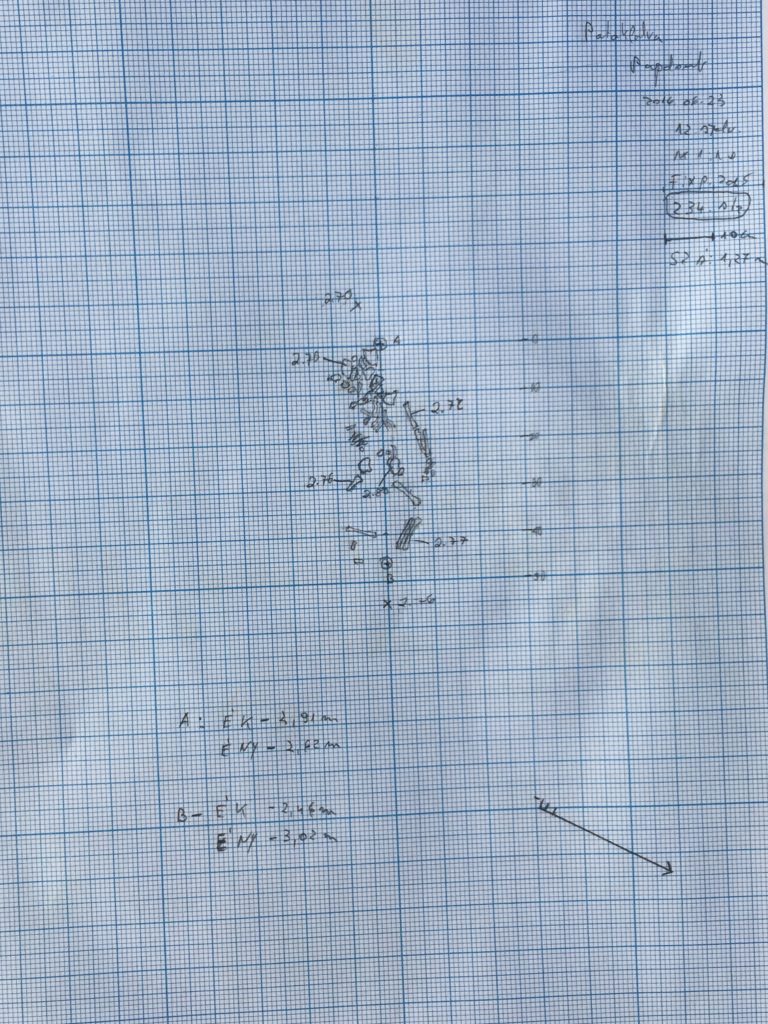 A Page from Maura’s Notebook

For the rest of the week, I worked on excavating a different burial. Before I had started working on it, Zsolt had pointed it out to Katie Z. and said, “There are legs there.” Zsolt has yet to be wrong, so I was set upon the supposed location of the legs. Lo and behold, I found just feet in that location. As with the neonate before it, this burial was in direct sunlight all day. Excavating baked out clay is rapidly becoming my least favorite part of excavation, especially when you know that the bones underneath are delicate. Thankfully, the feet are very well articulated, which somewhat eased the excavation process. Other than the distal phalanges, all of the bones in the right foot are present and the left foot has all the bones through the proximal phalanges, including sesamoid bones. By Friday, this burial was ready for a photo and elevations, though I had missed the key Zsolt window of opportunity on Friday. I’ll have to wait until next week to finish up paper work and mapping.

A very cool feature of Patakfalva is that we are surrounded by hills. Therefore, we have the distinct pleasure of watching the storm clouds role into our site from quite a distance. We had just about two minutes of rain catch us while we were waiting for the bus on Thursday. Friday, however, was an entirely different story. 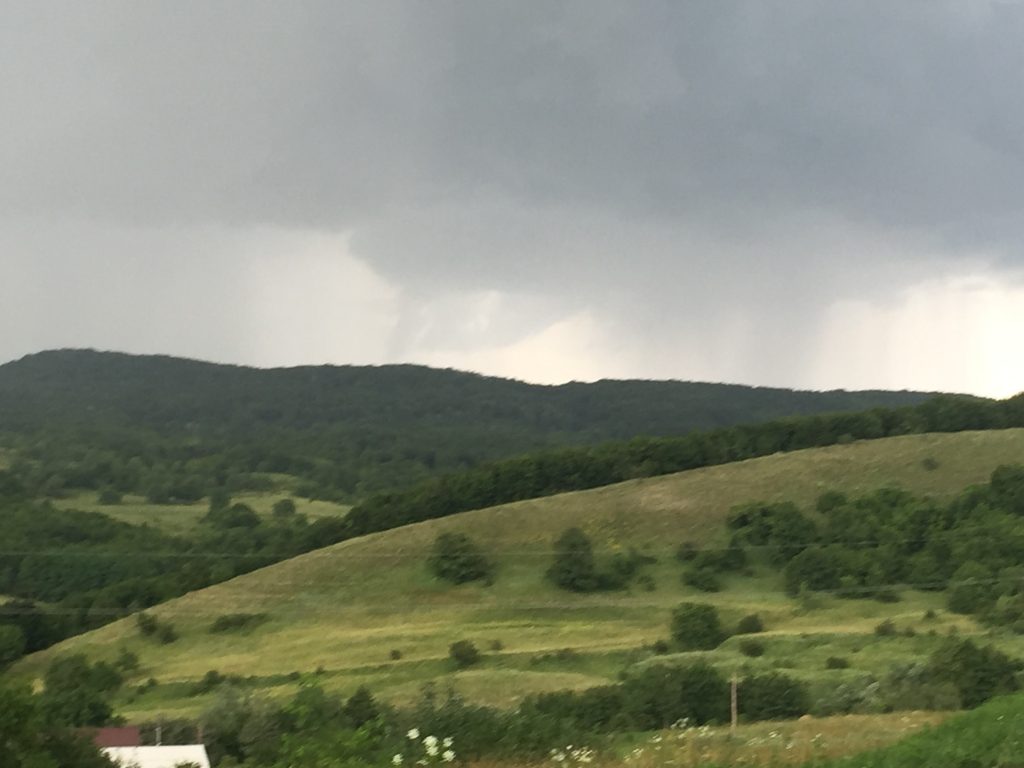 We could see the clouds over the northwest hills at our noon lunch break. Other members of the crew had the foresight to check the weather. I had ignored my raincoat on my bedroom floor and set out on Friday morning none the wiser that we were headed for a torrential downpour. By our 3:00PM break, the clouds had darkened and the wind was picking up. Before the end of our break, Katie Z. instructed us in the rain procedure. She asked that we keep our tools close, and be ready to tiny tarp our individual and big tarp the rest of the trench if she shouted “rain.” Burials first, then gear. In the back of everyone’s mind, however, was the fact that we don’t have a structure at Patakfalva. If rains, we get wet.

As the day went on, the wind steadily picked up and the clouds darkened. By 3:45PM, we had the “rain” call, and the mad scramble started. I cannot adequately describe the chaos that ensued. We had three trenches to tarp, which is incredibly difficult with high-speed winds. We were forced to sacrifice entire sides of trenches 12 and 11 in order to preserve the more fragile burials. There was lots of shouting, and falling on wet clay, and general mayhem. After the fact, a fellow participant described the experience as “feeling like I was on a sinking ship in a terrible storm, doing everything we could do to stay alive.” With the thunder, lightning, and rain like needles, I don’t disagree. The best part was after the trenches were as under control as we could get them, we had to wait for the bus in the pouring rain for another half hour. Go team.