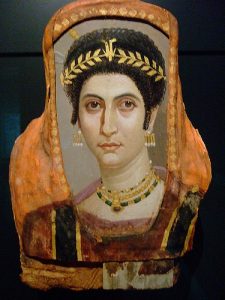 On April 23rd 2017 at the Common Hour in Rittenberg Lounge Dr. Christelle Fischer-Bovet spoke to us about “Identifying People in Hellenistic and Early Roman Egypt – A Comparative Perspective.”
“Hellenistic rulers and the Roman government were already exposed to the issue of identifying people for juridical and fiscal purposes. The systems that were used in Egypt at both periods have been variously interpreted and often contrasted. By looking at legal and fiscal documents preserved on papyri, this paper explores how official categories of persons allowed both states to single out groups that were particularly valuable to the state formation process and whose loyalty was essential. It suggests that both systems are more similar than usually thought and that the Roman system in Egypt can be understood as a systematization of developments already occurring in the last century of Ptolemaic rule. However, in contrast to the early period Ptolemaic, this systematization did not create new elites, but rather maintained the privileges of most of the same families.”