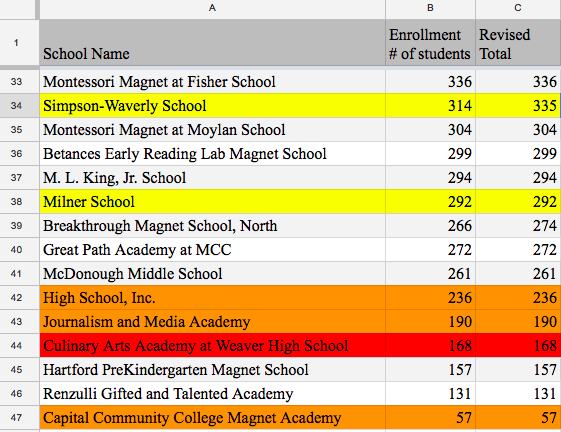 Yesterday, I posted a data visualization with enrollment, race, and accountability data for the Hartford Public Schools in 2015-16. That was the most recent year with all of these data points publicly available.

So I wanted to post enrollment data for HPS in 2016-17, the most recent year of available data, in order to aid the discussion about the recent reorganization plans. What’s most interesting is that the schools that are proposed for closure, Batchelder, Simpson-Waverly, and Milner (all in orange print below), are not the smallest schools in the district. So if we are talking about efficiency in closing small schools, these would not be the first schools I would look at to close and/or merge with other schools.

The average (mean) school enrollment in Hartford is around 423 students when combining the special education programs with the regular school totals. Depending on how you deal with small school programs, the average enrollment size Connecticut is somewhere between 400 and 500 students.

Small schools aren’t inherently an issue. But there are tradeoffs. On the one hand, a smaller school could mean smaller class sizes, better relationships, etc; and, on the other hand, small schools could mean an inefficient use of resources such as buildings and teachers. Also, it’s important to note that some of the schools on the list already share space with other schools in the same building (e.g. HPHS programs).

Indeed, even before the most recent reorganization plan, MLK school, High School, Inc., Culinary,  Journalism and Media Academy, and Capital Community College Magnet (all in red print below) were already merging or had plans to consolidate with other schools. In other words, the district has already started the process of merging very small school programs with other small programs, such as the plans for the Weaver and MLK renovation projects.

Importantly, schools are not necessarily in control of their enrollment either. Smaller school enrollments could be the result of a number of things such as changing neighborhood population and demographics, district decisions in where they place students in non-magnet schools, parent preferences, facilities capacity and condition, losing students to magnet and charter schools, etc.

In this case, there are schools in Hartford that are smaller than Batchelder, Simpson-Waverly, and Milner that are not facing a proposal to close or merge. These schools include Breakthrough North, Great Path Magnet, McDonough Middle School, Hartford Pre-K Magnet, and Renzulli Gift and Talented Academy.  A fair question might be: If a criterion for merging or closure is small enrollment size, then why not close or merge these smaller schools first?

Notes: Some small programs enroll fewer than ten students and some up to 40 students. I add these enrollments to the total for the revised total column in the chart above in the case where a small school program corresponds to a larger school program. I combine them with the overall totals because they are mostly located in the same school as their name suggests (e.g. Autism Program – Simpson-Waverly). The LC-Burns program did not have an enrollment total, so I estimated 2.5 students, the average of 4, 3, 2, 1, which are all possible values here.