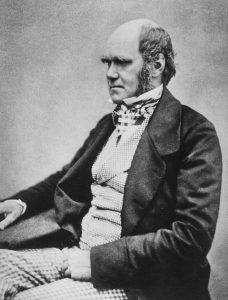 To his thinking, those who supposed that God would create species deliberately were imagining him in the image of man:

It is scarcely possible to avoid comparing the eye to a telescope. We know that this instrument has been perfected by the long-continued efforts of the highest human intellects; and we naturally infer that the eye has been formed by a somewhat analogous process. But may not this inference be presumptuous? Have we any right to assume that the Creator works by intellectual powers like those of man? If we must compare the eye to an optical instrument, we ought in imagination to take a thick layer of transparent tissue, with a nerve sensitive to light beneath, and then suppose every part of this layer to be continually changing slowly in density, so as to separate into layers of different densities and thicknesses, placed at different distances from each other, and with the surfaces of each layer slowly changing in form. Further we must suppose that there is a power always intently watching each slight accidental alteration in the transparent layers; and carefully selecting each alteration which, under varied circumstances, may in any way, or in any degree, tend to produce a distincter image. We must suppose each new state of the instrument to be multiplied by the million; and each to be preserved till a better be produced, and then the old ones to be destroyed. In living bodies, variation will cause the slight alterations, generation will multiply them almost infinitely, and natural selection will pick out with unerring skill each improvement. Let this process go on for millions on millions of years; and during each year on millions of individuals of many kinds; and may we not believe that a living optical instrument might thus be formed as superior to one of glass, as the works of the Creator are to those of man?

The idea that the world had evolved under the influence of natural laws and processes was not new. It can be traced back at least as far as the ancient Greeks. But it was an idea whose time had come. It was welcomed by Western Christians who viewed belief in miracles as unsophisticated as well as by agnostics like Thomas Huxley and atheists like Ernst Haeckel. Darwin had taken an ancient idea and made a credible attempt at reformulating it in the terms of 19th century science.

With the support of prominent clergymen and the advocacy of Huxley in Britain and Haeckel in Germany the theory of evolution gained converts rapidly. True, some of the most prominent scientists of the day were skeptical or outright dismissive of the idea that blind natural forces wielded such creative power, but by 1896 Joseph LeConte of the University of California could write:

And that is the way things stand even today. Our conceptions of the mechanisms may change, but God as genetic engineer is forever banished from his creation. We are not to suppose that “the Creator works by intellectual powers like those of man”.

The importance of Darwin as an influential thinker is unquestioned. Whether such thinking led scientific investigation by the True Road is far less certain. The question of its contribution to human health and happiness is best avoided lest we meet the gaze of the victims of the Arian Master Race, Eugenics, and Scientific Racism.

Today is February 12, Darwin’s birthday which there is effort to promote as International Darwin Day. It is appropriate on this day to compare Darwin’s legacy to that of another great man his contemporary, Louis Pasture. For this I defer to William Thompson Sedgwick of the Massachusetts Institute of Technology whose remarks were published posthumously in Science in 1923:

Both Darwin and Pasteur were fortunate in bringing out their great ideas at the right time. (Agnosticism in medicine, agnosticism in cosmology). The world was tired of supernaturalism and ready for naturalism. It was tired of confusion and ignorance concerning disease, and eagerly embraced the germ theory.

The fame of Darwin has grown greater with the passing years. Darwinism has already become merged and may one day become submerged in the broader doctrine of evolution, of which it was the forerunner. Pasteur’s name, curiously enough, is popularly best known in pasteurization, a process of applied science employed long before his day under other names and no name, but first made rational and scientific by him. But Pasteur’s original ideas and discoveries have spread like an infection until today they cover the earth.

Darwin, the master of the organic world, sleeps near Newton, the master of the inorganic, in the great Abbey, among the most famous of his race. Pasteur rests alone in the chapel of his laboratory. The world claimed Darwin’s body to place among its great ones. Science kept Pasteur’s for its own. Both dwell forever among the immortals. The last half of the nineteenth century may well be called their age–the Age of Darwin and Pasteur.