Hartford, CT– On Tuesday, February 28, 2012 high officials at various independent colleges in Connecticut came together at the Legislative Office Building, located at the Capitol building, to discuss the abolishment of the CICS grant during a meeting titled Higher Education and Employment Advancement. The Connecticut Independent College Student grant program is a program founded to fund Connecticut residents attending private in-state colleges with endowments of more than $100 million (Trish Brink).  The CICS grant helps fund financial aid programs of private colleges in Connecticut. Due to this program, private colleges in Connecticut can allocate a sizeable portion of their financial aid money to Connecticut residents that would otherwise not be able to attend their schools. Currently several private colleges in the area are facing the fact that they may no longer receiving funding from the CICS grant. Not only would losing this funding hurt the financial aid programs at these colleges, but it would also mean that not as many students from the Connecticut area could attend these schools. In essence these institutions rely on this grant program in order to fund a big portion of their financial aid programs, and without this program there will be severe consequences for the institutions.

To start of the meeting, President Jimmy Jones from Trinity College spoke about the detriment of losing CICS funding and the loss it would cost the college. Jones stated that the loss of CICS funding would widen the gap between the number of students who can afford to attend Trinity, and the much smaller amount of students who receive aid. Jones stated that this grant was vital in their ability to provide aid to all the students who need it. Trinity College costs $57,000 dollars a year to attend, and without aid many families cannot afford to pay. Furthermore, Jones stated that the loss of CICS funding would impede Trinity’s ability to respond to the needs of some of Connecticut’s most successful students, therefore most likely inhibiting their ability to attend one of the states premier institutions of higher learning. Jones stresses the point that continuing to provide aid and access for Connecticut students is one of the highest priorities at Trinity College, however the school cannot do that without the CICS Grant.  Trinity faces competition from other colleges for these outstanding Connecticut students, and he does not want to be losing these types of students due to an inability to provide financially for them. The question that was asked of Jones was: If CICS money is removed from the financial aid budget, will money be shifted from the general financial aid fund to continue to provide the same exact same level of funding to Connecticut residents, and will the same number of needy Connecticut residents be admitted? Jones responded by stating that CICS support allows Trinity College to stretch the financial aid budget, and helps Trinity College maintain its own commitment to generously provide the means for Connecticut students who wish to attend an independent college. Ultimately, Jones stressed the importance of keeping in place the continuation of aid from the CICS grant, and strongly encouraged the legislators not to abolish the funding to these institutions. He further emphasized his point by stating that even though the economy is going through difficult times right now, continuing this grant can be seen as a necessary investment in the workforce and society.

Next, Elaine Solinga, Director of Financial Aid at Connecticut College spoke on the matter. Solinga stated the importance of the continuation of the CICS grant, and in doing so shared important facts about the College’s financial state to back up her case. Currently 48 percent of students at Connecticut College receive financial aid, and the CICS grant plays a huge part in funding the financial aid program. The college is currently able to meet the full need of the students and has $24.7 million allocated for Financial Aid. The college also has an endowment of $195.2 million, with approximately $2.8 million from the endowment that serves as their institutional grant budget. If CICS funding is eliminated the college will not be able to meet one hundred percent of need for the students, and would be forced to make some difficult decisions. The lack of CICS funding will also inadvertently affect minority students because a large portion of financial aid for these students comes from the CICS grant. This is due to the fact that a certain portion of the grant must be allocated to minority students. Overall, Solinga stated that Connecticut College needs the grant in order to meet one hundred percent of student need, and without the grant students will suffer and the college will most likely lose a good number of students from Connecticut.

Next, John Gudvangen, Director of Financial Aid at Wesleyan University presented the University’s stance on the matter. Gudvangen stated that it was very important for Wesleyan that the CICS grant continue to maintain the commitment for funding Connecticut State residents to attend independent schools. Gudvangen asserted that Wesleyan educates over 200 Connecticut residents a year. Currently, at Wesleyan University 64 students receive CICS funding, 47 % of them are minorities, and the class average grants is well over $37,000. This year Wesleyan received only $306,000 in CICS funding, which is down over 30% since last year.   Although Wesleyan has an endowment of $600 million the college cannot reallocate funds for Financial Aid, it needs that money for other essential expenses. According to Gudvangen Wesleyan is the most affordable option for Connecticut residents who wish to attend a private college; Gudvangen estimates the cost at $55,000. Gudvangen also notes that the CICS grant allows the best and the brightest students of Connecticut to remain in state and attend elite universities and colleges, and is an important part of what makes it possible for the college to sustain a commitment to financial aid for these students. Over the last 3 years Wesleyan has provided double digit increases in that commitment to students, but with the loss of CICS funding the University cannot continue to sustain such a level of financial growth. Gudvangen ended stating, “ we are operating in a world of diminished resources and it is the kind of investment, like CICS, that will really help families.”

Finally bringing the subject to a close, Dominic Yoia, Senior Director of Financial Aid at Quinnipiac University spoke on the subject. Yoia began by stating that Quinnipiac University is one of the 3 largest beneficiaries for the CICS grant program, which helps fund a number of Connecticut students to attend the university based upon the number of Connecticut students enrolled each year. Yoia stated that 81% of students at the university receive grants and loans. At Quinnipiac, a large portion of the CICS grant goes to minority students and students involved in community service. If the state eliminates this grant it forces students to resort to parent loans or private loans, which is clearly not ideal. In his last statement Yoia said, “When we collectively make cuts across federal state institution aid programs we set higher education back 100 years, where attending college was based on a family’s wealth and not a student’s academic potential. I respectively ask that we don’t view this program as an expense but rather an investment; an investment in our students, in our communities, and in our future.”

After Yoia’s statement the topic came to a close and a new issue was introduced. However, it can be concluded that these four colleges as well as many other independent colleges in Connecticut would suffer if they no longer received CICS funding. Additionally, not only would the financial aid offices of the colleges suffer, but also many individual students would suffer, as they would lose the opportunity to attend these elite colleges and universities. 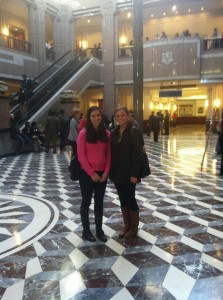