On February, 19th, 2019, from 5:30 pm to 7:20 pm, the annual Board of Education Regular Meeting for Hartford County was held in Bulkeley High School, 300 Wethersfield Ave, Hartford, CT (map). The meeting aims at conveying parents’ and teachers’ concerns towards all level Hartford public schools. Each report had three minutes to present and the reporters’ concerns were seriously considered by the Connecticut State Board of Education. English-Spanish translators were provided for individuals with special care.

The concerns mainly presented by parents. One mother who has a primary school child in the Hartford Public School system raised her concern in lacking understanding her son’s school life. She stated that she did not know the curriculums in the school and she not know what activities her son was participating during school time. Therefore, the parents wanted to see their children’s report card and a progress report on a regular routine from the school. Parents were not satisfied with the students’ academic performance. One parent presented data from his child’s primary school: 26 out of 33 students had an average level of reading, and even fewer students had an average performance in mathematics. Thus, parents and teachers are all looking forward to the Board of Education, hoping they take action in boosting students’ academic achievement.

Parents also wanted their children to receive more and higher-quality communication with teachers and school faculties. There was a group of Latina mothers called for better and qualified education for their children. For now, the school is not providing programs that students needed. They wish the school can provide an after-school program for their children. In addition, the mothers also realized the lack of communication between school and parents as the prior parent pointed out. The mothers stated that they have no idea of what their children are doing in the school. Therefore, they want the school to provide workshops for the parents to understand the school system and the education system and let them take part in the school’s decision making. However, the principal asked them to be independent when they asked for a change.

A female teacher from Hartford Public High School also presented her concerns for the high number of absent rates in the school. According to the teacher, students were sent to the school, but they did not go to the class; instead, they wandered around in the academic building. Students’ absent to the class not only leave obstacles for teachers to supervise their behaviors and prevent them from injury in the building but also have a negative influence on their academic achievement. The female teacher believed that it is a significant issue and the Board of Education need to take action immediately in improving relative policies that help teachers keep students in the classroom.

At the end of the meeting, the Board of Education gave awards to students who stand out in a school-level art competition and the warm atmosphere in the conference room was pushed to the peak. One girl just graduated from the high school said she was accepted by six colleges – she seemed to receive a high-quality education as the parents and teachers expected to. However, there is still more effort need to be put. Considering the concerns in Hartford Public School System – what can we do? 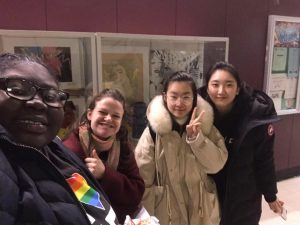 (Image of the news reporters)