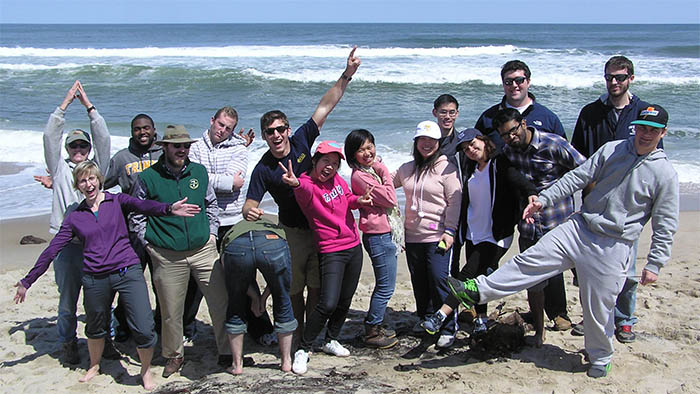 See what too much fresh air can do to you?

The final event of the Spring 2013 ENVS senior seminar, which focused on aquaculture, was a trip to Cape Cod to learn about shellfish production there.  All senior ENVS majors and minors, along with ENVS professors Morrison and Gray drove to the Cape on the last weekend in April.  Our host was Ryan Burch, a Trinity alum (’98) and shellfish specialist who now lives in and works for the Town of Brewster, MA. 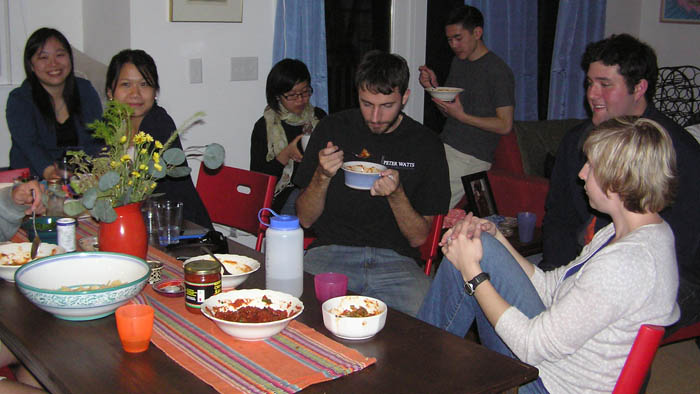 Dinner at Ryan and Juliet's house. Thank you!

Upon our arrival on the Cape on Friday night, Ryan and his wife Juliet generously hosted us at their home, for a wonderful dinner of tortilla soup.  And the fruit-dip dessert was extra special because of the secret ingredient (we know but are not telling)!  Some of the older ENVS sleeping bags proved to be less than sufficient during our cold night at Sweetwater Forest Campground, but when we awoke, Sam and Saam quickly took care of the morning chill by successfully starting a roaring fire despite really damp wood.  Breakfast was eagerly consumed by cold and hungry students. 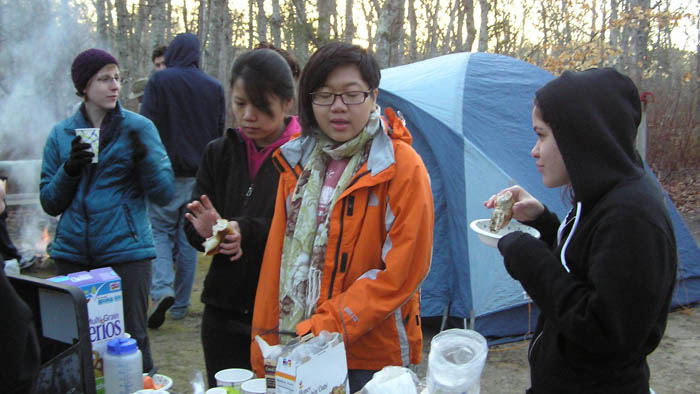 Everyone was so efficient that we were already packed and ready to go when Ryan arrived at our campsite at 0700 on Saturday morning.  First stop, the tidal flats at the Town of Brewster to visit the town’s shellfish farm, which Ryan oversees.  The beach and tidal flats were spectacular at that hour and given the really low tide.  Ryan showed us the cages where larger oysters were growing out, students marveled at the variety of interesting creatures present on the tidal flats, and Ned scared us all with a giant sea worm. 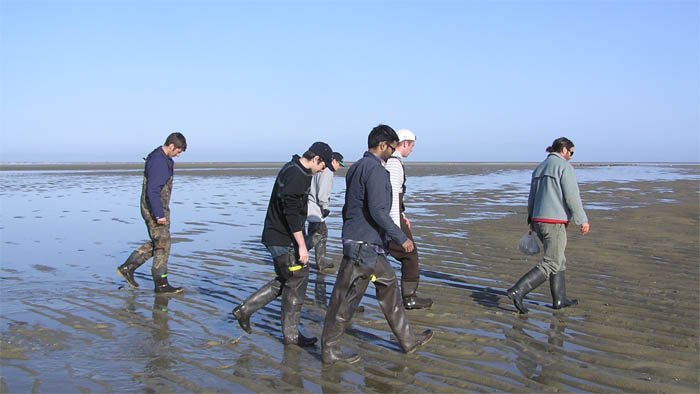 Across the tidal flats.

After the tidal flats the java and breakfast sandwiches at Brewster’s premier coffee shop, Jomama’s, were mighty welcome.  From there we drove out of Brewster for a tour of the hatchery at the Aquaculture Research Center.  This facility produces most of the shellfish used in aquaculture on Cape Cod, as well as the small shellfish used by towns for seeding operations.  Manager Dick Kraus showed us tanks where oyster larvae were growing and explained how the largest and most complicated part of their business was growing the food that the shellfish larvae eat. Those little guys go through enormous amounts of diatoms and phytoplankton, daily! 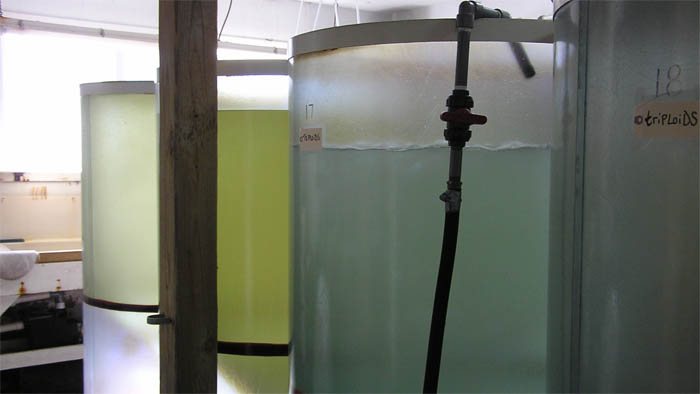 The sobering complexities of a local environmental issue really hit home when Dick told us about the controversy over ARC’s desire to erect a wind turbine to provide power.  A turbine would help reduce the hatchery’s current $5000 per month electric bill, which Dick said is really putting pressure on their business.  However, to date, local residents have prevented the wind turbine mostly because of concerns about having to look at it.  Local shellfish producers are really concerned about the future of ARC as the main supplier of oyster and quahog seed on the Cape; “No more ARC would mean the end of aquaculture on Cape Cod,” one local fisherman said. “It’s really an essential thing for aquaculture.” 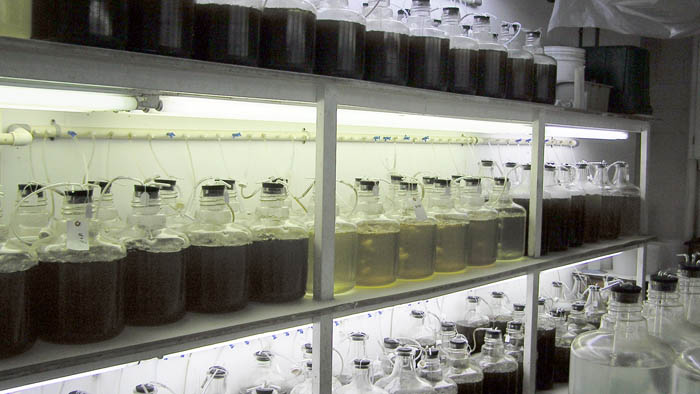 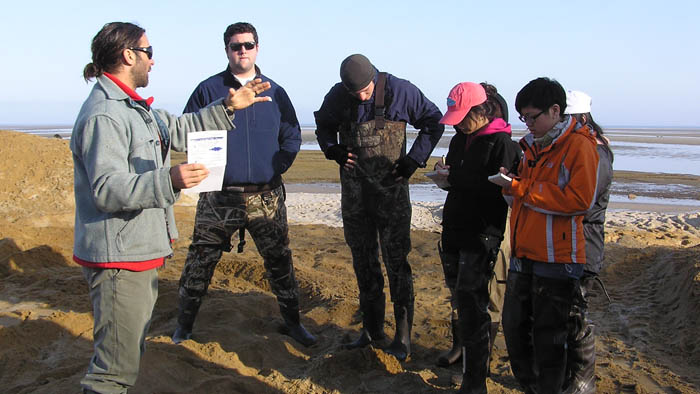 on the beach again 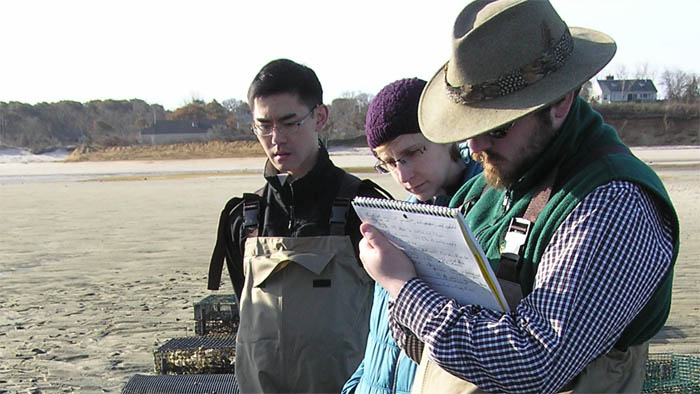 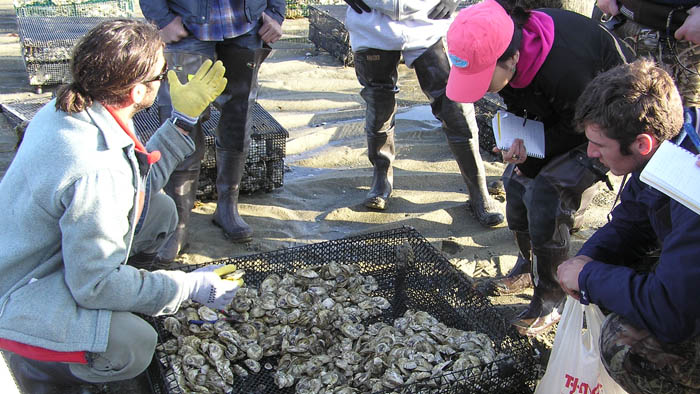 Following a short drive along the beautiful southern Cape beaches, we stopped at the harbormaster’s facility in Chatham, where the Aquaculture Specialist for the Town’s Shellfish Department provided information about the next step in producing shellfish – the land-based upwellers. 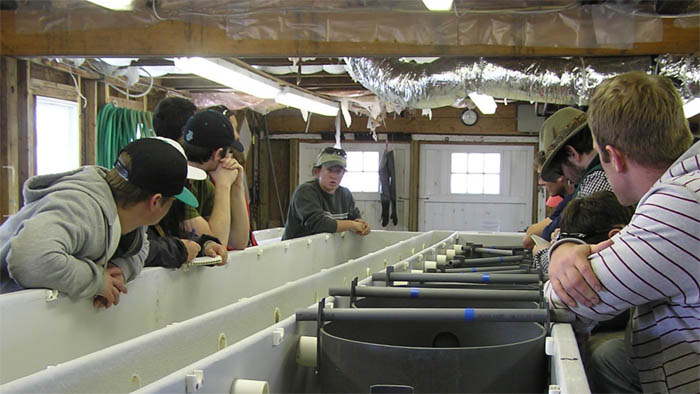 After a delicious lunch of clam strips and onion rings, we visited the final stop on our tour – the Wellfleet Shellfish Company.  There, manager Ron gave us an overview of what happens to all the clams, oysters, and scallops that are brought to his facility and amazed us with his mastery at keeping track of who brought in what, who ordered shellfish and when they wanted delivery, and the ever changing prices. 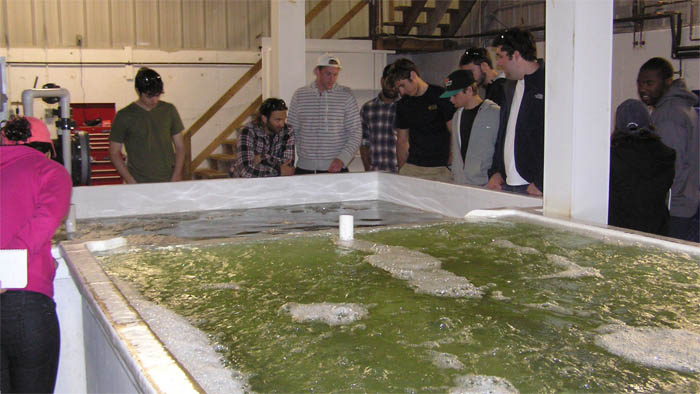 The clam sorter was particularly cool – as random clams were fed into the contraption they were sorted, by size, by several whirling cylinders of different diameter (go figure how THAT works!) and dropped unceremoniously into various bins – little necks, cherry stones, top neck, and quahog.  Wonder who invented that one but it sure is efficient!  Finally, after a hard day of watching oysters grow, we made a welcome stop at Coast Guard Beach on the Cape Cod National Seashore, where students took advantage of the sun and warm sand.  What a great trip!  Aside from learning about all steps involved in raising shellfish on the Cape, we sure had fun! 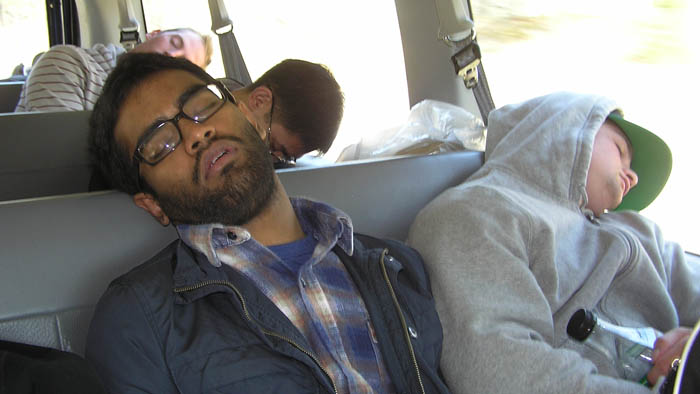