Sensual perception in the work of Johann Georg Hamann 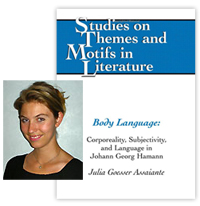 Language is a structured way through which human beings communicate with one another and more easily conceptualize the world around them. At the same time, each of us has unique experiences that account for variations in how we understand the words we use. To what extent do these variations occur? And what does this mean in terms of the universality of language?

In her recent book, Body Language: Corporeality, Subjectivity, and Language in Johann Georg Hamann (Peter Lang Pubilshing, Inc., 2011), Visiting Lecturer in Language and Culture Studies Julia Goesser Assaiante addresses questions like these through the perspective of 18th century German philosopher Johann Georg Hamann. The book details the central role that sensual perception plays in the work of Hamann, who was interested in “the constitution of subjectivity and the resulting relationship between subjectivity and language.”

Faculty Highlights: What specifically attracted you to the work of Johann Georg Hamann?

Julia Goesser Assaiante: I first encountered Hamann in a graduate school, and it was not love at first sight. I was tasked with presenting his essay “Aesthetica en Nuce” (aesthetics in a nutshell) to the class, and after a week of intense preparation I found myself less confident that I even understood the basics of what he was saying! But the opacity of his writing is what eventually drew me in. It is a puzzle with labyrinthian twists and turns and the deeper you go, the more you see. And it’s all by design—Hamann meant his readers to be puzzled, intrigued, infuriated even, at the withholding of meaning! But there are also moments of great beauty in his writing, and the challenge to the reader is to connect all of the disparate parts.

Faculty Highlights: To clarify, does “sensual perception” simply refer to the ways that individuals process through their senses the world around them?

Julia Goesser Assaiante: Yes, I mean it in its most concrete form. In focusing on sensual perception, Hamman is an heir to the empiricist skepticism of David Hume. Hamann argues that all we can really rely on is our sensual perception of the world, and when it comes down to it, this is something we must take on faith. Ergo, our very encounter with the world around us through our senses becomes a “leap of faith” that we are really seeing/feeling/smelling/touching/tasting the object of our inquiry.

Faculty Highlights: What do you mean by “abstraction of language” and “finite subjectivity?” How does the latter shape the former?

Julia Goesser Assaiante: Hamann views language as inherently abstract and metaphorical, in much the same way that Friedrich Nietzsche explains that when we use the word “leaf” to denote the green objects hanging on trees, we are using a catch-all abstraction that covers over the individuality of each single leaf. What Hamann—and here he prefigures Nietzsche quite closely—wishes to uncover is the lost, creative specificity of language. Hamann is arguing for a use of language that makes more room for creative and individual ways of communicating the sense of “leaf,” without using the crutch of that tired abstraction. And since our encounter with the world is conditioned by our finite, organic existence, a language that reflects more of each individual’s experiences would be more in keeping with the creative use of language for which Hamann is arguing.

Faculty Highlights: In what ways do Hamann’s ideas run counter to the Enlightenment tradition?

Julia Goesser Assaiante: Hamann was deeply suspicious of knowledge that was not empirical, and he felt that an increasing turn toward the rationalization of human affairs represented a turn from the divinely granted human qualities of individuality and creativity to the false idol of reason. Hamann feared that a purely rationalist understanding of the human condition could not account for the messiness and unpredictability of human affairs, and it is precisely that messiness which makes us so wonderfully human. One anecdote to illustrate this point is Hamann’s crusade against various proposed orthographic reforms of the time that were designed to make the German language more “rational.” Hamann argues that the moments in which written and spoken language differ, when curious formulations arise, when languages contaminate one another—these are the moments in which human language briefly comes into contact with the divine unity of word and act. Arresting that movement of language would be like gutting its divine spirit and origins.