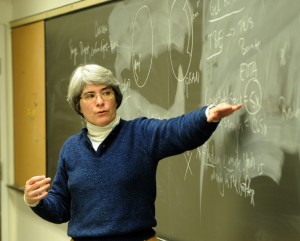 In August, The American Society of Plant Biologists (ASPB) Education Foundation awarded a $26,853 grant to Kathleen Archer, associate professor of biology. The grant will pay for a portion of an ambitious project that will help reform how introductory biology courses are taught in higher education.

The catalyst for reform in undergraduate biology education is the proliferation of information that the field has experienced during the past 50 years. “Initially, we could take an introductory textbook and cover it in a semester,” said Archer. “But now it takes sometimes two or three semesters. As biology knowledge continues to increase, we are going to have to make decisions about what essential things students should know on which they can build in upper-level courses.”

This perspective is reflected in a 2009 report called Vision and Change in Undergraduate Biology Education: A Call to Action, which was sponsored by the American Association for Advancement of Science (AAAS) and the National Science Foundation (NSF), with contributions from the Howard Hughes Medical Institute (HHMI). Although the report was one of several that pushed for reform of introductory biology instruction, Archer says that Vision and Change was the most articulate in laying out what steps need to be taken. “It essentially says, ‘We’re spending too much time trying to have students learn facts, and not enough time teaching them how to be scientists,’ and asks that we focus on big picture ideas of how knowledge is acquired.”

Archer developed the grant proposal in partnership with her co-investigators whom she met in 2011 after she delivered a lecture at the ASPB annual meeting. Together, they are working on creating a concept assessment, or a collection of questions that can universally evaluate what students know in a particular area of study.

Archer and her colleagues are focusing on plant biology, but the larger field of biology covers topics ranging from molecules to ecosystems, with different professional societies overseeing similar projects in each sub-discipline.

Once they are assembled, Archer said, the consequences could be seen at undergraduate institutions across the country. “The concept assessments should work pretty much under any circumstances,” she said, “and can help us reform the way we teach undergraduate biology.”