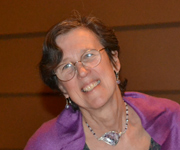 Judy Dworin, professor of theater and dance and a member of Trinity’s first coeducational class in 1970, was among 13 women honored by the Connecticut Women’s Hall of Fame on Thursday, October 18 during its 19th annual Induction Ceremony at the Connecticut Convention Center in Hartford.

Three women were inducted into the Hall of Fame and Dworin and nine others were feted as honorees. The 2012 “Voice & Vision Honorees” were described as a distinguished group of women “who have used their voice and vision to express their passions and perspectives through various mediums.” In particular, Dworin, the founder and artistic director of The Judy Dworin Performance Project, a 23-year-old dance and theater ensemble, was singled out as “a creative force giving voice to women and inspiration for social action through dance/theater.”

Each of the honorees said a few words in keeping with the theme of the event. Said Dworin: “In the struggle to find the light in the darkness, I listen, look, feel, and reflect and I try never to lose hope. In this way, I have found my voice.”

Dworin’s influence has extended beyond the classrooms and performing arts studios at Trinity, where she has been a member of the faculty since 1971. While at Trinity, Dworin founded the Dance Program, cofounded the Trinity/La MaMa Performing Arts Semester in New York City – which recently celebrated its 25th anniversary – and chaired the Department of Theater and Dance for many years.

Dworin founded the Judy Dworin Performance Project, Inc. (JDPP, Inc.) in 1989 based on her belief in the role that the arts play in “challenging and creating change in our universe – personal, educational and global.” The JDPP provides cutting-edge performances that address issues of social justice through the Ensemble; Moving Matters!, which supports a collaborative residency with Trinity at Parkville Community School; and Bridging Boundaries, a program that reached out to those affected by incarceration, including women in prison, re-entering the community, children with parents in prison, and mothers in prison and their children.

Specifically, Dworin has worked with underserved and at-risk populations in urban public schools and community centers and, since 2005, at the York Correctional Institution for Women in Niantic, CT.

Among the 16 works that address issues of gender and social justice are Meditations from a Garden Seat; In This House;The Witching Hour; Time In; and ¿dónde estás? Some of the works have been performed at the Charter Oak Cultural Center in Hartford, the Garde Arts Center in New London, the Kennedy Center in Washington D.C. and at various colleges. In addition, the Ensemble’s work has been filmed and aired on Connecticut Public Television, National Public Television and WHNB-TV.

In addition to being honored by the Women’s Hall of Fame, Dworin was given a Tapestry Award in 2010 by The Hartford Courant for “building bridges of understanding;” the Charter Oak Cultural Center Vision Award in 2006; the Connecticut Dance Alliance Award for Distinguished Service in 2006; a Governor’s Arts Award in 1999; a citation for Excellence in the Arts from the State Department of Higher Education in 1999; and a Connecticut Advocate for the Arts Award in 1998.

The mission of the Connecticut Women’s Hall of Fame is to honor publicly the achievements of Connecticut women, preserve their stories, educate the public and inspire the continued achievement of women and girls.

For more information about Judy Dworin and the JDPP, please visit: www.judydworin.org.