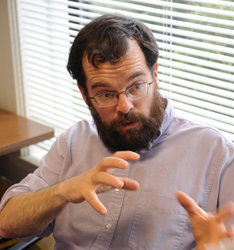 The Atlantic Cities recently profiled Associate Professor of Educational Studies Jack Dougherty and his colleagues at the University of Connecticut, who have created a series of unique interactive historical maps of the state of Connecticut. The maps were stitched together from thousands of photographs taken in 1934 of the state, which was the first in the country to complete a comprehensive aerial survey of its territory.

As the article points out, these interactive maps allow users to study not only the economic development of the state, but also changes in resident demographics as well as schooling and housing boundaries from the depression era to present day.

The project is the result of a fellowship from the National Endowment for the Humanities that supports collaborative work between individual scholars and digital humanities centers. The fellowship was awarded in 2010 to Trinity College and the Map and Geographic Information Center (MAGIC) at the UConn campus for the purpose of collaboratively creating historical research and developing web-based interactive maps.

The maps are an integral part of another of Dougherty’s projects: a continuously updated, Web-based book titled On the Line: How Schooling, Housing and Civil Rights Shaped Hartford and its Suburbs. The project builds on historical and contemporary research that Dougherty has completed with students, faculty, and community partners through the Cities, Suburbs, and Schools Project at Trinity.

An example of this on-going research is a study that was conducted in 2011 by Dougherty, Candace Simpson ’12, and Katie Campbell ’11 who, in partnership with MAGIC, created interactive maps of changes in racial demographics and housing prices in the Hartford region between 1900 and 2010. Students in the seminar conducted qualitative surveys of city and suburban Hartford residents, first showing participants the maps and then asking questions like: “Some people look at these maps and see a story of racial or economic barriers that still persist, while others see a story of civil rights progress that our society has made over time. What do you see?” After collecting and analyzing the responses, results indicated that Hartford city residents perceived more barriers to progress while suburban residents perceived greater civil rights progress. The full study can be viewed at http://ontheline.trincoll.edu/preview-chapter/part-5/.

In addition to garnering media attention, Dougherty says that the publically available maps are being noticed and utilized in other, more unexpected ways. Individuals have contacted him about using the maps to track their family history, and the maps have even been adopted as by area high school teachers. “As the maps were being created we put drafts up on the Web, and a couple of teachers heard about what we were doing,” Dougherty says. “One ended up making an activity for his Hartford 9th grade social studies class about neighborhood changes in the city, and my student and I came to watch, learn, and speak with them about improving our interactive maps .”

Once the lesson plan was completed, Dougherty added it to On the Line. The teaching resources can be found at http://ontheline.trincoll.edu/teaching-and-learning/