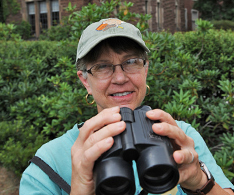 During the fall planting season, the City of Hartford took advantage of a $70,000 challenge grant that they received earlier this year from the U.S. Fish & Wildlife Service Migratory Bird Program’s Urban Conservation Treaty for Migratory Birds. The grant, acquired under the stewardship of Professor of Biology Joan Morrison, is being used to improve the habitat in Hartford parks for native and migratory birds and to develop educational guidelines that describe the characteristics of urban bird habitats and identify hazards to birds living in cities.

“Most people who live in urban areas have this idea that wildlife lives somewhere else, in a rural refuge or a protected area,” said Morrison. “We are trying to find ways to educate people in the city who are very removed from nature about wildlife and about the importance of urban habitats.”

With over 50 percent of the globe’s population living in urban areas, the Urban Conservation Treaty was created to raise awareness among city residents about the value of wildlife, especially migratory birds. In particular, the Connecticut River is an important pathway for birds in the Atlantic Flyway that stretches along the Atlantic coast of North America.

Green spaces in parks located in Hartford serve as feeding and resting spots for thousands of birds during their seasonal migrations along the Connecticut River corridor. Many more species of birds native to the region reside in Hartford’s urban green spaces, such as Keney and Pope parks, year round.

Morrison pursued the grant from the U.S. Fish and Wildlife Service in partnership with Mary Pelletier, director of Park Watershed, Inc., a Hartford-based citizens group whose mission is to cultivate clean water and healthy urban environments in the Park River watershed region.

Morrison’s work takes several forms, the first of which is improving the habitat directly by creating a plant palette. “The palette will identify and contain descriptions of a suite of plants that are appropriate for this region’s soil and climate and are also useful for birds as food and shelter,” she said.

The plant palette is under development by Morrison, who is working with Trinity students to inventory what birds use Keney Park and Pope Park during different seasons. Once Morrison and her research team record the types of birds that are using the park, they will next determine what each species requires for food and nesting. They also will identify and address hazards to birds in Hartford, including light pollution, feral cats, and windows on city buildings. Birds can become disoriented by city lights and often strike windows, sometimes fatally, when they see trees reflected in the glass. 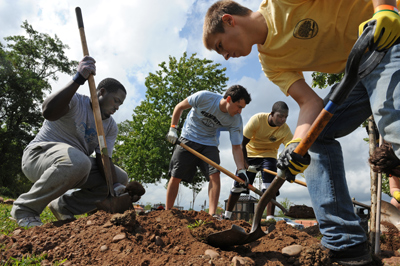 Trinity students plant trees at Pope Park during Do It Day 2012. (photo by Nick Lacy)

In addition to collecting data for the plant palette, Morrison and her team at Trinity, along with Pelletier and other members of Park Watershed, Inc., the Parks & Recreation Advisory Commission, Friends of Keney Park, and Friends of Pope Park, are working with Hartford residents to provide hands-on education through planting and other park improvement efforts.

One example of this hands-on approach occurred in September during Do It Day, when Trinity students worked with Morrison, Pelletier, and the Knox Park Foundation to plant trees and shrubs around the pond in Pope Park.

Morrison is also working with three different middle schools—Mary Hooker Magnet School in Hartford, Two Rivers Middle Magnet School in East Hartford, and Illing Middle School in Manchester, CT. Students have taken field trips to wooded areas where they are able to interact with birds in the field. “The kids learn how to catch birds and how to band them, take wing measurements, and record data. Plus, we get to talk about why scientists band birds and why wildlife preservation is important,” said Morrison.

Morrison and Pelletier will have a year to monitor the updated park habitats to see how plants grew and were used by birds. After adjustments are made, the resulting plant palette will provide standards and best practices for public park maintenance going forward, as well as for businesses and residents in the region looking to their improve their campuses, industrial parks, or backyards. The palette will ultimately be available in digital and print forms and made available to the public.

“Similar projects have had success in Philadelphia, Chicago, Phoenix, Portland, and other cities across the country,” Morrison said. “When we finish the project at the end of 2013, we hope that our parks will be rejuvenated and provide improved resources for Hartford’s wildlife and its residents.”