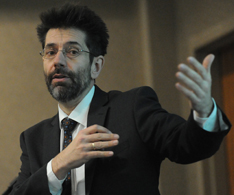 Mark Setterfield, Maloney Family Distinguished Professor of Economics at Trinity, delivered his inaugural lecture, “Growth and Crisis: A Multi-Agent System Approach,” on December 3 at McCook Auditorium. The presentation centered around an ongoing research project on which Setterfield collaborated with Bill Gibson, John Converse Professor of Economics at the University of Vermont.

Setterfield began his lecture with an overview of previous literature on growth and crisis–subjects that he described as well-established themes in economic theory with obvious contemporary relevance. Traditionally, models for studying economic systems are articulated in diagrams and equations. Since the early 1990s, however, the multi-agent systems (MAS), or agent-based modeling approach, has provided an alternative framework for studying economies.

The use of computer programs for modeling opens up limitless opportunities for study in this field. However, the more complicated the model, Setterfield noted, the more difficult it can be to interpret the output.

Setterfield ran the computer model, projecting constantly flashing lights of economic activity on a large screen, to show the model tracking the creation of demand, productive capacity, and financial wealth in the economy.

The MAS model and related research developed by Setterfield and Gibson–with the assistance of Trinity students–will allow researchers to study the effects of different financial network structures and monetary regimes on the performance and resilience of the economy, including the capacity for growth and the propensity to encounter crisis.

The important research question involved is how real and financial forces combine to affect performance and resilience. The ultimate conclusion, said Setterfield, is that troubled economies “can emerge, but not necessarily from the size and connectedness of financial firms. Firm conduct, not financial market structure, undermines economic performance and this should be the focus for policy makers.”

A key takeaway, Setterfield noted, was that stand-alone models of the real or financial sectors can be misleading. It is important to integrate both sectors to successfully study growth and crises.

Setterfield, who joined the Trinity faculty in 1992, is chair of the College’s Department of Economics. In addition, he is an associate member of the Cambridge Centre for Economic and Public Policy at Cambridge University (UK), a senior research associate at the International Economic Policy Institute, Laurentian University (Canada), and a member of the Centre d’Économie de l’Université Paris Nord (CEPN) at l’Université Paris XIII (France).

His main research interests are macrodynamics (with a particular focus on the development and application of concepts of path dependence) and Post-Keynesian economics. He is co-editor of the newly released After the Great Recession: The Struggle for Economic Recovery and Growth (Cambridge University Press, 2013), author of Rapid Growth and Relative Decline: Modelling Macroeconomic Dynamics with Hysteresis (Macmillan, 1997), editor or co-editor of six other volumes of essays, and has published in numerous journals including the Cambridge Journal of Economics, Journal of Post Keynesian Economics, European Economic Review, and The Manchester School.