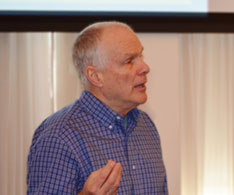 The Faculty Research Committee spring lecture series began Thursday, January 31, with a presentation by Charles A. Dana Professor of Biology Craig Schneider, who discussed the evolution of DNA sequencing and species recognition of marine macroalgae. Schneider’s game-changing work in this field has resulted in breakthroughs in the approach of molecular research on the taxonomy of algae, which came to the international forefront in November 2012 when major media outlets–including The Boston Globe, Reuters, and Maine Public Broadcasting Network–ran stories on a Asian red seaweed species that had invaded the New England coast. The seaweed was first discovered by Schneider in Atlantic North America back in 2009.

Listen to the full lecture.

In the 1990s, Schneider and some other taxonomists discovered that, while certain algal species resemble one another in overall appearance, they are not necessarily DNA relatives, and vice versa. These “cryptic species” were a crucial discovery that opened doors to new research, while simultaneously revealing that many research mistakes had been made over the years in the study of algal placement on the tree of life.  “Mine included,” said Schneider, adding that “eyes alone” can’t always help distinguish organisms; rather we need to look at their genes.

DNA sequencing was especially useful for the identification of Heterosiphonia japonica, the red seaweed that Schneider found on a Rhode Island beach coast in 2009.  Schneider was able to identify the species, originally described in Japan, through molecular research of the algae.  The invasive species, which reproduces a-sexually, grows quickly and aggressively and can survive in warm or cold waters. Only a few creatures, such as sea urchins, eat enough of it to limit its spread, and there simply aren’t enough sea urchins in the northeastern United States to keep up with this rapidly growing alga.

Schneider’s research has been largely enhanced by international resource databases, primarily GenBank.  This resource allows Schneider to analyze and compare DNA from various species of algae all over the world, and has, in turn, made his research data available to scientists worldwide.

Schneider’s findings have resulted in a major grant from the National Science Foundation, which the professor is coordinating with a former student, Christopher E. Lane ‘99, assistant professor of biology at the University of Rhode Island, who also received an NSF Grant to study algae in Bermuda.  The two have co-authored multiple papers and continue to focus their research on algae from Bermuda, research essential to the long-term environmental health of the islands.