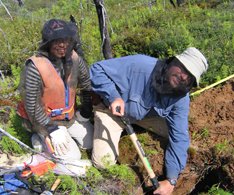 The title of the Common Hour lecture was “Predicting the Fate of Arctic Carbon.” But after twice traveling to northern Manitoba, Canada, to study the Arctic tundra and the possible effects that climatic change could have, Christoph Geiss, associate professor of physics and environmental science, found that there are no easy answers.

Thanks to a grant from the National Science Foundation, Geiss was able to visit the Manitoba tundra in 2008 and 2009, along with fellow scientists from Bowdoin College in Maine, St. Olaf College in Minnesota and the Science Museum of Minnesota. “Our main conclusion,” said Geiss, “is that peatland evolution is much more complicated” than scientists first envisioned.

Using spectacular photographs from the Manitoba landscape, Geiss explained to his Common Hour audience Thursday that his team is still analyzing its collected data. But one result of global warming that is apt to happen is that the forest will grow in a northerly direction and the tundra will change, perhaps reducing or even eliminating the peatlands.

Manitoba has approximately 17 percent of Canada’s peatlands, covering 19.2 hectares or almost one-third of the province. They’re concentrated in the Hudson Bay lowlands, areas to the north and east of Lake Winnipeg, the Saskatchewan River Delta, and the southeast corner of the province.

One of the reasons Geiss chose northern Manitoba is because the tundra is similar to the Arctic and the ground is permanently frozen, making it a suitable locale to conduct his research. 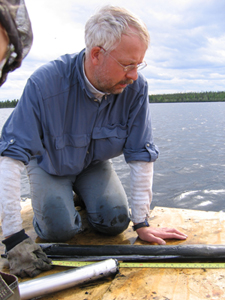 The peatlands, which are wetlands with a thick waterlogged organic soil layer (peat) made up of dead and decaying plant material, contain a significant amount of carbon mainly from the plants that have accumulated over thousands of years. Peatlands include moors, bogs, mires, peat swamp forests and permafrost tundra.

Geiss and his colleagues used aerial photography and borehole- and ground-penetrating radar data to estimate the extent and size of peat deposits in northern Manitoba, and a combination of paleo-climatic records to determine when the deposits formed and how they might change in the future.

It’s estimated that 18 to 19 gigatons of carbon is stored in Manitoba’s peatlands, an amount equivalent to almost a century of Canada’s greenhouse gas emissions. Canada’s wetlands, including peatlands, have been identified as the import important carbon sink in the world.

One of the reasons that the future of peatlands is critical is that they have a long history of supporting human activities, such as for the gathering of medicinal plants, hunting, trapping for food and clothing, as well as gathering plants for ceremonial and spiritual purposes. Peatlands also contribute clean water and a habitat for many animals, birds and insects.

In studying the area, Geiss said the group tried to determine how the climate has changed since the retreat of the glaciers 8,000 years ago and how the landscape responded to the change. That is especially important, Geiss said, given that most scientists believe that it is going to get “much, much warmer over the next 50 years.” The team also studied the sediment in the lakes, which were carved out by the glaciers, to “figure out how the climate had changed.”

Some of the effects of global warming in the future could be the melting of ice, the drying of the peatlands, the export of dissolved carbon into the ocean and the release of methane, a potent greenhouse gas. All of those effects would obviously greatly affect the region’s ecosystem and contribute even more to climate change.

On the other hand, as the climate gets warmer, the peatlands could grow and counteract the harmful effects. A third option would be if the climate stabilizes, the landscape could stabilize, Geiss explained. That’s why more study and analysis is needed, he explained.