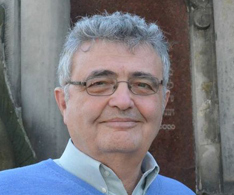 Since the 2007 publication of Who Will Write Our History? Emanuel Ringelblum, the Warsaw Ghetto, and the Oyneg Shabes Archive, Samuel Kassow, Charles H. Northam Professor of History at Trinity, has won numerous awards, been elected a Fellow of the American Academy for Jewish Research, lectured often and widely, and been recognized as one of the world’s leading scholars on the Holocaust and more specifically, the fate of Jews in Poland.

Just last month, Kassow was invited to Warsaw to commemorate the 70th anniversary of the Warsaw Ghetto uprising and was asked to speak at the unofficial opening of the Museum of the History of Polish Jews. The five-day event, April 18-22, was somber yet uplifting and featured a number of dignitaries and notable organizations, including the president of Poland, Bronislaw Komorowski; the Israeli Philharmonic and conductor Zubin Mehta; philanthropic organizations; human rights activists; scholars; and Simcha Rotem, one of the last survivors of the ghetto uprising.

About 3.3 million Jews lived in Poland at the outbreak of World War II, although in 2011 only about 7,500 Poles identified themselves as Jews. Nonetheless, the Warsaw Ghetto and Poland’s pre-war Jewish population is still inextricably linked with Polish history.

The Warsaw Ghetto uprising began on April 19, 1943 when the German military entered the Ghetto with the intention of “liquidation” – the deportation of all residents, mostly Jews, to forced labor camps. The residents chose to resist rather than be deported to the camps, where death awaited them. The Jews continued to fight for 28 days, though greatly outnumbered and lacking weapons. By May 16, thousands of Ghetto fighters were captured or killed and the Germans proceeded to destroy the Ghetto.

The major highlight of the 70th anniversary commemoration was the dedication of the museum, although it is not scheduled to officially open until early next year. Kassow not only has served as a consultant to the museum since 2006 but he delivered the first formal lecture in its auditorium to approximately 400 people.

When the permanent exhibition of the museum (which cost about $100 million in money donated by the Polish government, Jewish groups and private donors) opens in the spring of 2014, it will tell the story of the Jewish people’s 1,000-year history in Poland. The core exhibition will demonstrate how Jewish history and Polish history have been intertwined, if not always happily.

Kassow also participated in a panel discussion on human rights, during which he spoke about the history of the Holocaust as well as Ringelblum. Kassow is considered the leading authority on Ringelblum, who, in 1940, established a secret organization named Oyneg Shabes in Nazi-occupied Warsaw to document Jewish life in wartime Poland and to compile an archive that would preserve the events for posterity.

Ringelblum was captured and killed in 1944 but before he died, he hid thousands of documents in milk cans and tin boxes. They were discovered in 1946 and 1950. Who Will Write Our History? tells the gripping story of Ringelblum and his determination to use historical scholarship to resist Nazi oppression. Kassow’s book has been published in eight languages.