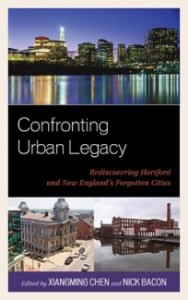 Confronting Urban Legacy: Rediscovering Hartford and New England’s Forgotten Cities examines the economic and cultural shifts that have beset the region’s urban centers over the past four centuries. Among the cities it looks at are Hartford; Portland, ME; and Lawrence and Springfield, MA.

The new anthology, published by Lexington Books, is co-edited by Xiangming Chen, dean and director of the Center for Urban and Global Studies (CUGS) and Paul E. Raether Distinguished Professor of Global Urban Studies and Sociology at Trinity, and Nick Bacon ‘10, who is a Ph.D. candidate in cultural anthropology at the City University of New York’s (CUNY) Graduate Center and remains affiliated with CUGS.

Confronting Urban Legacy, which is now available, has been called the first academic book to specifically analyze Hartford and other small cities and regions in New England. Taking an interdisciplinary approach, the volume includes contributions from sociologists, anthropologists, historians, political scientists, and community leaders.

Part I provides rich historical delineations of the many rises and falls of Hartford, its suburbs, and of Lawrence. Part II offers a broad contemporary treatment of Hartford by dissecting recent immigration patterns, and examining the demographic and educational dimensions of the city-suburban divide by using the case studies of Springfield and Portland. Lastly, Part III explores Hartford’s social, economic and political conjuncture and looks into the future in terms of what the city could become

Hartford Mayor Pedro Segarra said of the book: “Given the current challenges facing cities like Hartford, the content of this volume provides ample fuel for further research and public discussion on the 21st century futures of cities like Hartford.”

And Sharon Zukin of Brooklyn College and CUNY Graduate Center, called the work “provocative,” noting that New England “is thoroughly global and highly problematic, divided between poor cities and rich suburbs, ethnic groups representing the Caribbean, Africa, and the U.S. South, a shrinking industrial and white-collar economy and a growing nonprofit sector. Here, in a microcosm, is urban society.”

In addition, Bruce Katz of the Brookings Institution said, “I truly believe that in this century every city needs to understand its special position in the global economy and global networks, building from historic legacies and links. To this end, Chen and Bacon compile a rich and original set of research that positions Hartford and similar small New England cities firmly on the global stage. This is a great platform for rebirth and renewal.”

Others who wrote chapters include Lyle Wray, executive director of the Capitol Region Council of Governments; John Shemo, vice president of the MetroHartford Alliance; Jason Rojas, Trinity’s director of community relations; Ezra Moser ’10; James Gomes ’75, and currently director of the Mosakowski Institute at Clark University; and Clyde McKee, a longtime professor of political science at Trinity who passed away in 2011.

Two additional contributors are Llana Barber, assistant professor in the American Studies Department at the State University of New York, Old Westbury; and Louise Simmons, professor of social work and director of the Urban Semester Program at the University of Connecticut.