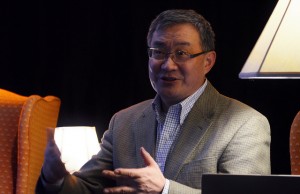 A research paper about the causes of China’s Great Leap Famine, co-authored by Trinity College Professor of Economics and International Studies James G. Wen, has been honored by the China Agricultural Economic Review as a Highly Commended Paper of 2014.

The paper, “Communal dining system and the puzzle of the Great Leap Famine: Re-examine the causality between communal dining and the famine,” was written with Yuan Liu and Xiahai Wei, both of the School of Economics and Management at South China Normal University in Guangzhou, China. Emerald Group Publishing Limited, which publishes the Review, called the paper “one of the most impressive pieces of work the team has seen throughout 2014.”

The paper examines China’s Great Leap Famine, which took place during the Great Leap Forward campaign of Mao Zedong’s Chinese Communist Party from 1958 to 1961. “The aim of the campaign was to rapidly transform the nation from an agrarian economy into a socialist society with highly developed industry and a national defense,” Wen said. “It turned out to be a great disaster. Around 15 million to 40 million died of hunger, and the economy basically collapsed. The real number has never been published by the Chinese government.”

The official explanation for the famine was bad weather, Wen said. “It was very embarrassing for the Chinese government to admit that this was a man-made mistake.” He said the famine actually began, puzzlingly, after a good harvest in 1958, which saw the highest per-capita grain consumption in rural areas during the famine period, and ended abruptly after this measurement hit the lowest point in 1961. “It was very counterintuitive compared with conventional famines,” Wen said.

When it came to explaining the causes of what he calls a “puzzling” famine, Wen and his co-authors focused on the communal dining system and its compulsory collectivization of the farmers’ food rationing.

As soon as the Great Leap Forward started, Wen said, Mao instituted communal farming and communal dining halls. “He believed if the farmers did not need to cook for themselves, it would save a lot of time for more productive things,” Wen said. “The mistake here was that it was compulsory. Mao took away the rationing of the food from the farmers – the last thing that a farmer could control after everything else was collectivized under the commune system.”

One widely accepted hypothesis, Wen said, was that to feed the urban population, the government’s procurement from the farms was too heavy, leaving the rural population with very little food. However, the paper says that this hypothesis cannot explain why the famine started when the rural per capita grain consumption reached the highest level, but ended when it hit the lowest level. Nevertheless, Wen said, this hypothesis, like the communal dining hypothesis, can explain why the farmers had no incentive to work hard. In this system, the farmers could not leave their land, and they did not get to keep more food if they grew more. This led to the consecutive fall in food production in 1959, 1960, and 1961, he said.

What really triggered the famine, Wen said, was that the communal food was claimed to be free. “So in the first few months after the fall harvest of 1958 you had overconsumption,” Wen said. “The farmers were competing with each other to eat more. In a few months, they exhausted the food. Other famines are related to shortage of food, but this was triggered by overconsumption of food first, followed by meager supply of food.”

By the spring of 1961, Wen said, the famine became so severe that eventually Mao yielded to the reality and agreed that the communal dining halls may have been a bad idea. Instead of admitting any mistake, Wen said, Mao let the farmers decide what they wanted to do, and the farmers chose immediately to claim back their food rationing and went back to preparing food at home.

“It is interesting that we showed that the idealism of sharing everything together often leads to disaster, especially when you force people to share,” Wen said. “If you do anything, you have to base it on people’s voluntary spirit. Even today, it can be a moral lesson to China.”

Currently, farmers in rural China are allowed to migrate to cities to seek jobs but are still not allowed to settle in urban areas, Wen said, creating a “floating population” of about 260 million people. “There is a de facto institutionalized duality between urban and rural. It reminds me of the causes of the Great Famine,” he said. “I have used the lessons from the Great Leap Famine to promote free migration, more secured property rights to land, and free settlement of rural people in urban areas.” Wen’s book on this subject, called Our People Have No Land, was the first of its kind that was permitted to be published in China.

In addition to pursuing his passion for teaching students about the confluence of economics and history at Trinity, Wen is also a specially appointed professor at Shanghai University of Finance and Economics.

To read the full text of Wen’s paper, click here.